Sugar, sugar, and more sugar made up the ingredients list for a lot of cereals in the ’50s. They tasted very sweet, needless to say, and had some sweet memories. But many of those treats disappeared from shelves, unseen in stores today. Looking at the other ingredients, though, maybe that’s not so bad.

Personal and preventative health has people considering their sugar intake – in addition to how much other things they take in, including ash. Yes, ash. But one mouthful of these takes many right back to a childhood of color and life. Did you eat any of these?

The Daily Meal calls the ’50s a “Golden Age of Cereal.” Spearheading this Golden Age was sugar – everywhere. Advertising had to have “sugar” nice and visible on the box, standing out on a whole swatch of colorful patterns and designs.

RELATED: Do You Remember Indulging In The Flavorful Pimento Loaf?

Sugar Frosted Flakes were helm of this sweet, sweet movement. And, in keeping with the theme, its 1952 launch came with “sugar” front and center. There it stayed until 1983.

Just a year later, in 1953, Americans dunked their spoons into bowls of Sugar Smacks. Notice the trends in the nomenclature. Kellogg’s introduced this puffed wheat breakfast cereal as part of the ’50s trend for sugary breakfasts. 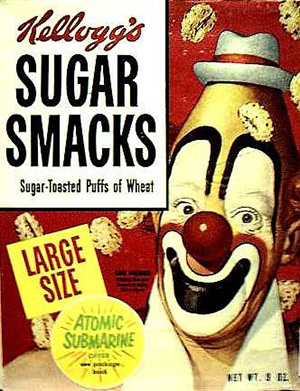 But for this name, too, “sugar” went from a big selling point to something in need of changing. By the 1980s, they became Honey Smacks, or simply Smacks outside of America.

Promote a sweet flavor even indirectly with Rice Honeys

Often, cereals had “sugar” right in the name. But there are plenty of examples when it was simply mentioned on the side or heavily implied. Such was the case with Rice Honeys. Though, MeTV mentions, the box did make sure children knew without a doubt to expect sugar.

This cereal from the ’50s offers an early example of incorporating famous figures onto the package. First came the Beatles, then Winnie-the-Pooh.

Sugar Krinkles put the ball in their court

Before any of these, there was Sugar Krinkles, promoted by Krinkles the Clown. When talking about the sugary recipe tendencies these ’50s cereals had, Sugar Krinkles can be implicated in a lot of that. What else would come from a breakfast that declared itself “candy-kissed?”

The trick to capturing that enticing taste lies coated all over the rice cereal bits in the form of caramel. Appearance-wise, it could be compared to Kellogg’s Rice Krispies.

Cereals in the ’50s set a few precedents. They fully embraced using sugar as an ingredient for breakfast and for financial profits thanks to excited kids. But they also reflected cultural shifts in different fields of study; in this case, it was science and space. 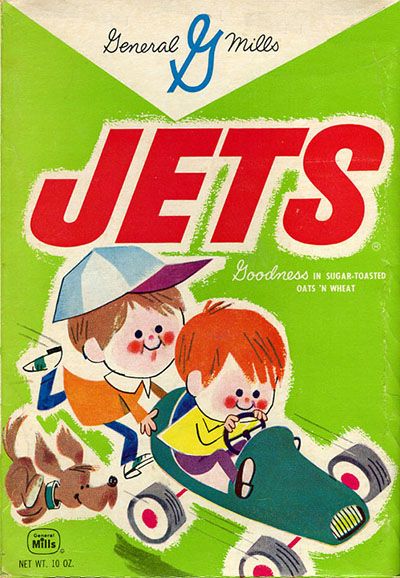 Blast off with Major Jet and a big bowl of Sugar Jets. This 1953 cereal rose with the astronauts dreaming of orbit and the moon. Between that theme and the sugar rush promised on the box, kids couldn’t stay away.

For those who missed the Orbits craze, essentially, imagine Chex. Orbits had a slogan that was a bit of a mouthful, but so were they, and they offered sweet, otherworldly flavors, so it’s okay.

That slogan read: “Spoon-sized cereal that’s out of this world! K-K-Krunchy waffles that stay K-K-Krisp to the last bite!” Again, note how it incorporates space themes, mixing it with adventure, fun educational opportunities, and…sugar.

Cereal goes through evolution too

Evolution made humans go from a tiny cell into a complex, capable being and it made Sugar Jets out of Sugar Smiles. Ah yes, from clowns to astronauts, the natural progression. Wait… 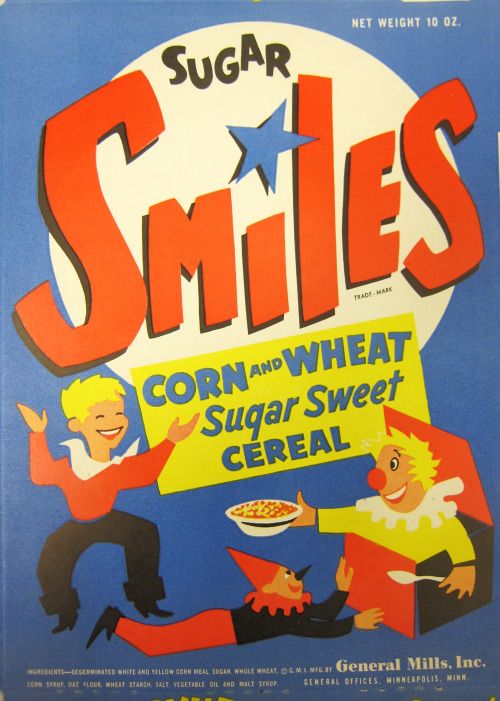 General Mills knew, at least, to make sure the clown promoting Sugar Smiles looked cute and approachable. That cartoon clown had to not distract from the presence of an eternal, reliable favorite: sugar.

Big Otis used to give OKs an okay

Try and find a box of cereal featuring a burly, scruffy Scot flexing in approval at a cereal called OKs. If you shopped in 1959, this task would be rather doable. Advertising took a different approach with this one, to say the least.

That unexpected design strategy extended beyond the Scotsman named Big Otis to the slogan. Instead of making sure kids knew, without a doubt, this cereal had sugar, Kellogg’s proclaimed it “br-r-awny new oat cereal.”

Captain Jolly enters the ring with some Corn-fetti

With Captain Jolly sailing in, Corn-fetti won consumers over not with big loud promises of sugar specifically, but it did boast about its “Magic Sugar Coat.” 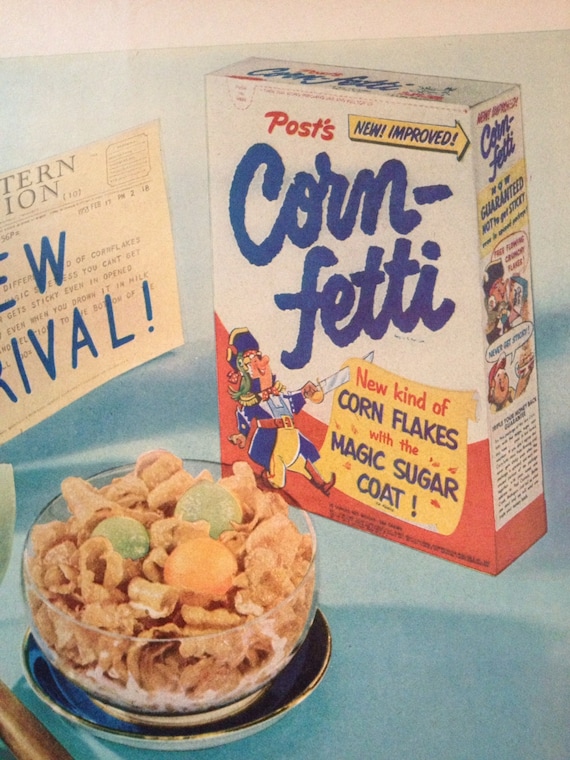 Setting sail in 1951, Corn-fetti helped usher in that famous “Golden Age” of cereal that the ’50s represented so well.

The ’50s cereal Renaissance comes to a triumphant close

The ’50s brought in a swell of delicious cereals to try. Most prominently bore sugar, sugar, and more sugar as selling point just about everywhere possible. Though, they also contained some funky ingredients our more health-conscientious society might balk to see, including ash.

But Frosty O’s did a fun job of wrapping up this successful decade of iconic, beloved, and mostly departed cereal names. Some dissipated over the years completely and others ended up as precursors to evolved forms. Frosty O’s represented the culmination of this decade’s legacy which was as full of “Sugar-Charged Cheerios” as this cereal itself.