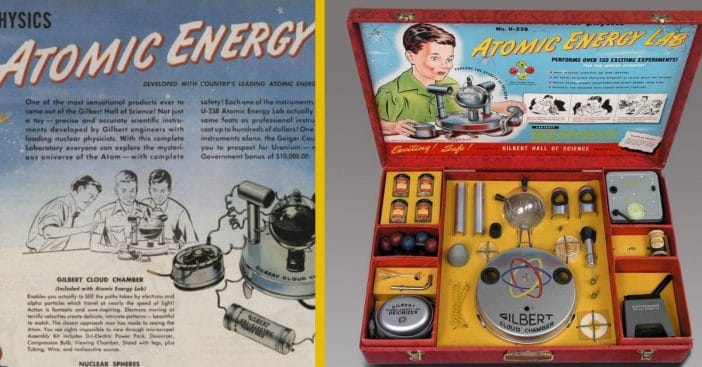 Toys today are very different from toys from years ago. Additionally, they contain different materials Dolls, cars, kits, and costumes look and feel different over the years. Today, it may shock some people to imagine kids working with actual uranium right in their den. But that’s exactly what the Gilbert U-238 Atomic Energy Lab let children do.

Today, it’s hard to get some candy because of choking hazards. But in the 1950s, children got samples of actual uranium to experiment on. And rather than cautioning against swallowing or, perhaps, radiation exposure, the kit reminded children to practice good science. That meant not contaminating the samples and thus invalidating any data.

The Atomic Energy Lab came at an auspicious time. America had just displayed its nuclear capabilities and found itself in an arms race with the Soviet Union. Science became the next big thing, particularly nuclear physics. The kit encourages users to use the samples included to observe radioactive decay, measure radioactivity of a sample, and find new radioactive samples.

Hands-on approaches to learning often get kids more excited about a subject than cookie-cutter lectures. CNN provides an example of the importance of letting children participate in science to better learn science. Though the Atomic Energy Lab’s heyday came in the ’50s, its origins trace back to the early 1900s. Mysto Manufacturing Co. was founded in 1902 and later became A.C. Gilbert Co., a giant in toys designed to spark interest in science. By the 1920s, the company developed a broad array of kits, including vacuum tubes, radio receivers, and more. Soon, their inventory included chemistry sets.

The inside cover of the Atomic Energy Lab declares the kit “safe!” At the time of the kit’s popularity, fewer rules dictated safety standards for toys. Instead, IEEE Spectrum reports, toy manufacturers could focus on public opinion. After World War II, science became especially popular. To both fuel this enthusiasm and respond to it, the lab included an informative comic book/manual hybrid.

In the book, titled Learn How Dagwood Splits the Atom!,  the characters of Blondie and Dagwood Bumstead taught children about atomic energy. Though whimsical, the unassuming book received backup from leaders of the Manhattan Project and important physicists alike. Though it presented engaging – albeit hazardous – opportunities to learn, the kit sold less than 5,000 units. The price then was $49.50, which is about $500 today. Those who did own one of these kits got to experiment with four jars of real uranium. Reportedly, anyone who could find more uranium for the government received a financial reward. Though safety is important, the lab does show how promising engaging science toys can be.