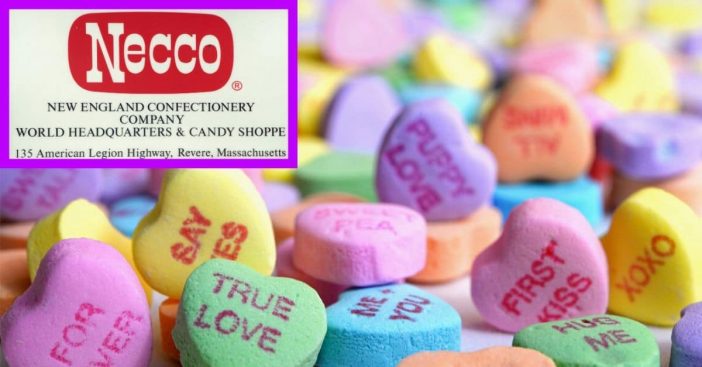 Valentine’s Day creeps up quickly each year. Only two months and two weeks after ending the year, we celebrate a day of love and romance. Boxes of chocolate warm those fighting the mid-February chill. Flowers bloom in defiance to the snow as symbols of devotion. All of these gestures witnessed around candlelit tables and heartfelt cards, make sense easily enough. The language of flowers dates back centuries ago. Likewise, chocolate raises endorphins to help the recipient feel happy. Hence, we gather all of those on Valentine’s Day. But what about those candy hearts?

Simple, colorful, and charming. These describe the candy heart. Tasty? That’s a little more up for debate. Still, they persist as a symbol of Valentine’s Day we can’t quite shake. Even if adults don’t get them for each other, parents may even help children put together little Valentine’s Day gift packages for classmates. But these persistent, traditional sweets have quite a surprising history, very different from hormones and symbolism. These candies go by many other names, including sweethearts and conversation hearts. As we see more and more sweets pop up for Valentine’s Day, read about their history here.

Another symptom of cold weather, besides fun holidays, is getting a cold. Sore throats, flu, allergies as plants start to return – all of these crop up in a predictable schedule throughout the year. This was the case in 1847 when Boston-based pharmacist Oliver Chase wanted to streamline lozenge production. His machine accomplished just that, making it easier to get these helpful little tablets. They enjoyed just as much popularity then as they do now, if not more so.

Chase’s lozenge cutter made it easier by removing some of the manual steps to roll and cut the kneaded dough into discs. Eventually, though, he saw this device’s usefulness in other applications as well, particularly hard candy. Oliver Chase thus founded Chase and Company. Later, this became known as the New England Confectionery Company, which we shorten today as Necco.

Printing words on them may have a more romantic backstory

Now making candy lozenges, the company produced the precursor to the candy hearts we know today. Eventually, Chase’s brother, Daniel, added the words. He used a felt roller pad dampened with red vegetable coloring. While the early history of these candies is coated in postnasal drip, Daniel’s contribution may have a more romantic drive.

There are still some debates behind Daniel’s motives when adding romantic words to the candies, but some popular theories are rather endearing and fit the theme of Valentine’s Day. One suggests that it was inspired by the idea of separated lovers sending romantic sentiments to Civil War soldiers to carry with them. While endearing, there is a more likely theory, which suggests inspiration came from cockles. This scallop-shaped candy contained a “motto” written on thin sheets of paper. Daniel wanted to get those messages on the candy itself.

Finally, the candy hearts got their final romantic form

For a while, they may have carried lovely messages, but Daniel’s candy lozenges didn’t have the shape we know today. Originally, candy took the shape of basic discs. Some eventually branched out to horseshoes and other fun shapes. But only in 1902 did they take on their true, heart-shaped form. Though other candy manufacturers followed a similar path, Necco declared itself “the leading manufacturer of conversation hearts.”

These candies endured even after a year of absence as Necco changed leadership. Each year, Necco reportedly produces 100,000 pounds of candy hearts. Though Necco offers different varieties, for the most part, they are made by mixing cornstarch, gums, sugar, corn syrup, and coloring. The mixing machine then flattens them before they are stamped, cut, and allowed to dry. The six different colors and flavors then get mixed together and packaged. Check out more about the process below! But be warned: this year, some candies might not have the messages you expect, according to CNN.