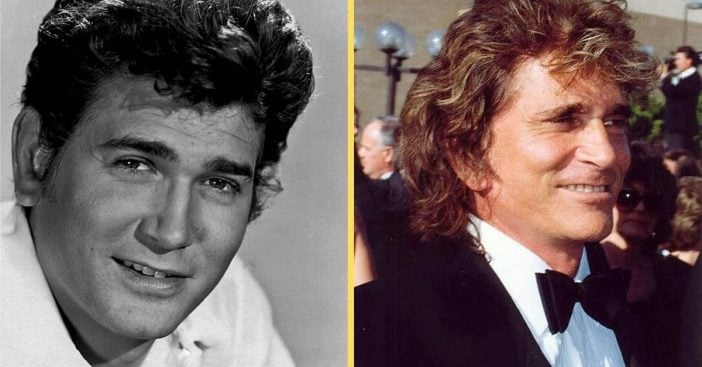 On many occasions, actors can change for the worse after entering the Hollywood spotlight. But Michael Landon’s hardships began well before that, when he was just a kid who should have been enjoying childhood. Too many people can relate to tales of a harsh upbringing. Landon’s childhood was nothing short of nightmarish. When he wasn’t fending for himself, he was taking care of his mother, who was actually his biggest source of stress.

For all the turmoil Landon would have wanted to escape as a kid, it followed him into adulthood. As Charles Ingalls on Little House on the Prairie, he became America’s favorite father, a classical, strong, faithful man others could aspire to. But outside of that life, Landon walked a tenuous line of self-destruction and cheating. All the while, he showed obvious care for his peers. Landon harbored a lot of positive and negative traits and habits that can be hard to reconcile. But that just makes this famous departed actor all the more remarkable – because he’s so relatable in many ways.

As Lev Tolstoy wrote, “happy families are all alike, every unhappy family is unhappy in its own way.” At first, Michael Landon’s childhood setup sounds like the stuff of dreams. His mother, Peggy, built a career as a comedian and dancer. Meanwhile, his father Eli was an actor and theater manager. But their marriage was unhappy and Peggy was not well. Ultimately, Landon took the brunt of her unhealthy behavior. Their own home became the site of numerous suicide attempts by Peggy, many of which Landon witnessed firsthand. He even had to intervene during a vacation to the beach, where Peggy tried to drown herself. While Peggy went on with her day like nothing had happened, Landon vomited and would later call it the worst day of his life.

Unfortunately for Landon, his pain radiated beyond his mother’s suicidal bouts. At least once, she pointed a knife at her son, who would save her very life. Michael Landon faced major stress on a constant basis from her bullying. As a result, he wet the bed for many, many years. This, too, she used to torment him. While his friends could walk calmly home from school, Landon had to sprint. That’s because Peggy would take the wet sheets and hang them outside Landon’s window so everyone would see. Eventually, young Landon had to get crafty and switch out the wet bedsheets so there would be nothing to display and humiliate him with. Landon’s bedwetting continued to the age of 12 because of all this stress.

Instability traveled with Landon into his family life later on

Fans of Little House got to see a reliable, faithful patriarch in Charles Ingalls. Michael Landon would himself have a rocky family life for various reasons. In total, he was married three times and, across those three marriages, had 9 children. Ultimately, though, he did show a lot of compassion for his family members, which came to him in various ways, not always biologically. For example, he established a blended family that included biological and adopted children.

In one case, Landon wanted to pursue adopting Cheryl, the daughter of Marjorie Lynn Noe with another man. The biological father was against this, but Landon vehemently assured Cheryl he, Michael Landon, was her father. However, his fidelity and dedication did not consistently extend to his wife. When Bonzana ended, Landon ended up working heavily on Little House on the Prairie. There, he met and had an affair with makeup artist Cindy Clerico. This affair, coupled with loss through Landon’s life, prompted him to break up with Marjorie completely. His children were crushed. In 1983, right on Valentine’s Day, Landon married Clerico.

Scandal, inspiration, and everything in between

None of this is to completely paint Michael Landon as a secret villain. Neither was he a saint. He had his faults and had wonderful qualities that made a lot of people stubbornly love him. While working extensively on Little House, he starred along with people that would become an extended family. In particular, Melissa Gilbert grew to hold Landon in high regard. While playing the fictional father to Gilbert’s character Laura, Landon ended up becoming a parental figure for Gilbert over the years. She reportedly said, “He was very much like a ‘second father’ to me. My own father passed away when I was 11, so, without really officially announcing it, Michael really stepped in.”

This too had a bitter edge to it. In an interview, Gilbert confessed, “As a kid, I didn’t know he sipped vodka from his coffee mug … but I’m sure he’s one reason why, as a young adult, I almost always picked men who smelled like alcohol.” And when his affair came to light, even she grew distant. But Landon was not without friends, finding kinship with Johnny Carson and learning karate from Chuck Norris himself. His antics on set became famous, especially his much-debated move to blow up the set of Little House. People debate today: was this just another wild Landon move, or was it a vengeful jab at the studio?

Michael Landon was a man of many talents

Throughout his short but remarkable life, Landon excelled in a lot of surprising things. While making TV history, though, Landon also built a music career for himself. By this point, Landon had gone from a boy fraught with worry over his mother to a successful athlete, setting records in javelin throwing at his high school. But life throws many events that set us on the path we’re meant for. A torn shoulder ligament knocked him out of the sport and set him on the path to entertainment we’re familiar with. By 1957, Landon was finally getting some consistent success and happiness, which lined up with the release of his single, “Gimme a Little Kiss (Will “Ya” Huh)”/ “Be Patient With Me.”

The A- and B-side of the record got a rerelease in 1962 in the Fono-Graf label and featured a picture of Landon in his latest hit at the time, Bonanza (one of the most iconic TV Westerns). Two years later, Landon released another single, “Linda is Lonesome”/“Without You.” His musical work transcends beyond these titles too!

Landon’s childhood left him deeply traumatized, with his mother both causing and exacerbating his bed-wetting habit for years. This major point in Landon’s life ended up showcased for all to see in The Loneliest Runner. This 1976 film tells the story of 13-year-old John Curtis. Lance Kerwin played this young character directly inspired by Landon. In Curtis’ story, he turns his desperate sprints home into an aspiration of athletic greatness.

First, Curtis joins his school track team as a way to channel his anger and reclaim this mad dashes, allowing him to reshape a young life of humiliation stoked by his own mother. Then, a jump into the future shows Curtis played by Landon as an Olympian who goes for the gold – and wins it. He’s fully reclaimed his past enough that he actually credits his mother with his success, repurposing his pain and rising above.

Landon’s fame began in earnest with Bonanza and continued to explode through Little House on the Prairie. But for all the reverence he received, he also endured insecurities on-set. With both programs, he would use subtle ways to address those points of discomfort.

For instance, on Bonanza, all of his cast mates in the Cartwright quartet stood at over six feet tall. Landon, meanwhile, was 5 foot 9 inches. That’s why on there and Little House, he wore heeled boots or platform shoes. Later, as Pa Ingalls, he would be careful to stand on stairs – always a step above others – to also conceal his height. Additionally, perhaps due to stress in his early life Landon started going gray at a young age. So, he would use coloring solution from a can to keep his full dark locks their famous rich light brown. No matter how idolized our favorites can be, sometimes they themselves don’t share those feelings towards themselves.

What connects a rugged western family man and a martial arts action star? Turns out, a pretty key moment for both men. With so much karate wisdom, Chuck Norris took time to teach others his craft. One such student was none other than Michael Landon. While it may be difficult to picture Charles Ingalls roundhouse kicking an attacker, this hobby is actually pretty consistent with the rest of Landon’s adult life, in that he kept himself very active. We’ve already seen him establish himself as a record-breaking javelin thrower, balance music with acting, and even get involved in producing and writing. But Landon’s activities extended beyond that, if you can believe it! He would keep himself busy with swimming, golf, and weightlifting. Maybe Charles Ingalls should have done just one flying side-kick, just to let Landon show off what he learned from the texas ranger.

This wasn’t the only bond Landon formed. After moving out from under the veil of stress his mother always hung over him, Landon faced another huge challenge later in life: cancer. This battle drew everyone’s attention and rumors spilled from the floodgates faster than the truth could patch the holes. Fortunately, Landon could count on appearances on The Tonight Show Starring Johnny Carson to clear the air himself. But appearing on the show didn’t just give him time to address his fans, it also allowed Landon to enjoy lighter moments with Johnny Carson himself. He appeared a few times over the years, with his final one coming in May 1991. Between then, he and Carson developed a friendship that even included pranks. In fact, Landon’s cat-related prank featured some major dedication by the actor that Carson did not soon forget.

Landon’s greatest battle was yet to come

Landon’s downhill battle with cancer began in April 1991 with intense headaches. Days later, he learned he had an aggressive form of pancreatic cancer. And it was terminal. Ever energetic and ready to tackle things head-on, Landon appeared on The Tonight Show to set the record straight and even conducted an interview with Life Magazine. Landon poured his heart out, navigating much of the same trials and tribulations we’ve explored here. He also opened up about what a struggle it had become to simply live.

In the end, though, Landon simply asked that fans pray for him, in exchange for his promise to keep fighting with all he had. Later that summer, Little Joe Cartwright, “Pa,” passed away. He was only 54. Today, he is immortalized with a star on the Hollywood Walk of Fame. Landon’s hometown of Collingswood bears a plaque known as the Little Treehouse on the Prairie in his honor. And those who remain who knew Landon remembered someone who always found time to be a father figure, even through all his life’s drama.