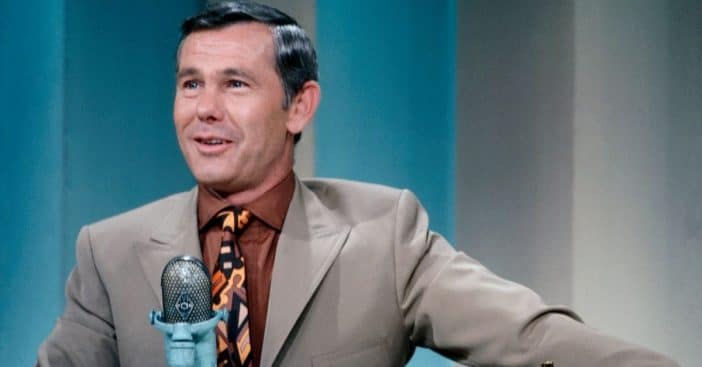 The Tonight Show Starring Johnny Carson was a staple of its time. It was the most modern format of live television and is what we now know as the late-night talk show. But while The Johnny Carson Show was historical, is was also controversial. From his jokes to his personal life, Carson wasn’t perfect.

This wouldn’t be much of a big deal now, but back then Carson often made jokes at the expense of other celebrities. There were lots of rumors and controversies that never really “stuck” — until now. Some of Carson’s real-life interactions and disputes with people will surprise you.

In his private, personal life, Johnny Carson was quite different from how he was on the show. Or, sometimes tension did seep into his public persona. He attributed this to his upbringing spent under a mother he painted in a cold light, Ruth.

Of Ruth, Carson said “She’s the toughest son of a bitch of them all. There is no goddamn way to please that woman. She’s Lady Macbeth! My marriages failed because she [expletive] me up!” He did not even attend her funeral when she died. Instead, he said, “The wicked witch is dead.”

Those close to Carson saw a different side of him. In fact, he treated his significant others rather disrespectfully. That didn’t change with marriage, either. In fact, he actually publicly humiliated his new wife — on their honeymoon.

Carson married Alexis Maas, his fourth wife, in 1987. For their honeymoon, they traveled to Italy on a yacht voyage. When Carson got into a bad mood, he took it out on Alexis. She made an offhand comment he didn’t like, so he said, “We’ve been married for three weeks. If you say something like that again, this marriage won’t last another three weeks.” Sometimes, his cruelty would cause celebrities to not go onto his show.

Not a father figure

Despite reportedly having a strained relationship with his own mother, Johnny Carson made no move to put on a better show for his family. All three of his sons were from his first marriage, and his son Rick endured mental health struggles. In those days, such challenges were not discussed at all, never mind in a healthy manner. Eventually, Rick ended up committed in a mental hospital and Carson refused to visit him.

Beyond those three sons, he never had any other children with his other three wives. His son, Rick Carson, had struggled mentally. Back then, mental illness was not spoken of or even really known of. When Rick Carson was committed to a mental hospital, Johnny flat out refused to see his son.

Then, on June 21, 1991, Rick was driving along a scenic coastal town in Morro Bay, when his car plummeted 125 feet down the embankment. Rick died instantly. Only then did Carson pay tribute to his late son.

Beyond attributing his mother Ruth to Carson’s nasty attitude, he was also a cruel drunk, and reacted extremely when others drank. NBC threw him a lavish 25th-anniversary party in October 1987. At the time, his son Rick was in attendance and he himself got drunk.

When Carson checked on him, the two ended up locked in a screaming fight, in the same place as network executives, media, and family and friends. Carson was actually declared the aggressor and made it into a shouting match, and appeared ready to punch Rick until someone stopped him.

5. Johnny Carson had to show he would kick the drinking…for a time

At the end of the day, Carson had an alcohol problem, and eventually authorities set some ultimatums about it. In fact, in 1982 he drank and drive, and pleaded no contest to a misdemeanor charge. As a result, he was sentenced to three years probation, had to participate in an alcohol program for drivers, and could only drive to work and back — without any human or animal passengers.

Carson did actually admit to this major folly during an interview with 60 Minutes. “I don’t handle alcohol well at all, no. Really don’t,” he shared. “Oh, Ed [McMahon] and I have had some wonderful times in the past.”

Like many other men in power, Carson did not hesitate to see other women. While entangled in divorce proceedings with his second wife, Joanne, he was also seeing Playboy model Angel Tompkins. All the while, he was warned that if his wife’s lawyer found out, he could lose the settlement.

In response, Carson simply replied, “[expletive] him. A stiff [expletive] has no conscience.” Joanne, meanwhile, knew about his infidelity. She received lavish gifts like a Rolls Royce and diamonds, but it put a strain on the marriage, to be sure.

In those decades, fat jokes were not uncommon, though it’s unclear where the trend started. Beauty standards have changed across time and location, and are societal-based. Johnny Carson used this approach with gusto on his show.

In fact, he used it to such a degree, it sparked one of those refusals to return that was mentioned before.Raymond Burr, a veteran actor with NBC, was the target of many of Carson’s fat jokes, to the point that he got so angry, he simply refused to appear on The Tonight Show. His only appearances came in 1968 and 1976.

Years later, singer Wayne Newton would appear on Larry King Live and say “Johnny Carson is a mean-spirited human being. And there are people that he has hurt that people will never know about. And for some reason, at some point, he decided to turn that kind of negative attention toward me and I refused to have it.” Eventually, Newton actually barged into Carson’s office and threatened him with a fight unless he cut it out with the jokes. Results were immediate.

It’s not a beautiful day in the neighborhood

Although it took viewers some time to accept Mr. Rogers’ wholesome speeches as sincere, once they did, he became an exemplary beacon. However, Carson did an alternate take on his character in the form of evil Mr. Rogers, who wanted to steal money from parents to keep his show going.

Fred Rogers himself was, predictably, unimpressed, and didn’t like this character that literally went against everything he stood for. Later, Carson did actually apologize for the skit.

Over the years, entertainment icon Bob Hope suffered from hearing and eyesight loss. As a result, when he appeared as a guest for the show, Johnny Carson actually found the episode to be a chore — for him — when Hope had trouble hearing the questions. It tested his already short fuse.

It meant Carson had to stick to the script to keep the flow natural. If he asked a question out of order, Hope might end up answering a different query. Yet, Hope continued to return to the show, much to Carson’s annoyance. One writer reportedly heard him say, “If I ever end up like that, guys, I want you to shoot me.”

Eventually, The Tonight Show was shortened to make room for Late Night With David Letterman. Under the new format, Carol Wayne’s bombshell blonde character was almost totally removed from the new, condensed format. Soon, Carol fell on hard financial times, which reportedly drove her to use alcohol and drugs, and to escorting to fill her wallet. One of her relationships eventually included Edward “Ed” Durston, a used car salesman. During a vacation in Mexico, they allegedly had an argument and Ed left Carol on the beach.

Days later, Carol’s body was found floating in a shallow bay. She was fully clothed in the water, which was only four feet deep. Drug and alcohol tests turned up negative. By the time hotel workers identified her, Ed had already left; Carol’s luggage was still at the airport. Ed remained a prime suspect for some time.

Lots to show from a tape of Johnny Carson

In 2014, a sex tape of Johnny Carson started to show up and circulate in selected circles. Reportedly, it had been recorded by one of his wives and showed a younger Carson who still had dark hair. TMZ reports that the tape had been up for sale to his estate, but the estate refused to purchase it and threatened to sue if it was released. For legal reasons, the seller could then only offer it for private collectors, not companies. Primarily, only stills are able to be found.

33. Johnny Carson Takes A Stab At The Hart

Just as comedians today use current events for comedy fuel, so too did Johnny Carson on his show. It was said, even by the ’80s, Carson could impact a candidate’s presidential bid. Gary Hart was up against Michael Dukakis for the Democratic ticket, but dropped out because of an affair with a woman named Donna Rice. The two went on a boat trip and a picture ended up in The New York Post. Carson let the jokes fly, especially fueled by the name of their ship: Monkey Business.

Once, television critic Greg Dawson joked, “Isn’t it reassuring to know that the identity of the next president of the United States could be decided in large part by Johnny Carson’s joke writers? It this a great democracy or what?”

For years, rumors persisted that  Johnny Carson was actually a perpetrator of sexual harassment against female coworkers and guests throughout his stint on The Tonight Show. Ultimately, no lawsuits arose, but that in turn was attributed to the time period and that Carson had good lawyers.

With Carson’s passing removing the possibility of direct justice, former guests have spoken out over the years.

The Octopus And Reluctant Guppy

While appearing on Watch What Happens Live with Andy Cohen, Sally Field discussed her experiences with Johnny Carson. Andy Cohen asked Sally how she would describe the relationship, to which she called it, “The octopus and the reluctant little guppy.”

Andy Cohen clarified, “He was all hands with you.” Reportedly, the two did date, but Sally said she was not actually interested in him. She just didn’t know how to turn him down.

What would Back to the Future be without its famous DeLorean, named after engineer and automotive executive John DeLorean? He had quite a few fans, including one Johnny Carson, who would show his support by becoming a chief investor when DeLorean first started his own automobile company.

Then, in 1982, DeLorean was arrested for attempting to traffic $24 million worth of cocaine after he’d been taped in an undercover operation. DeLorean claimed entrapment and was acquitted. His reputation suffered and Carson’s investment flopped.

Tell us what we missed in the comment section below!