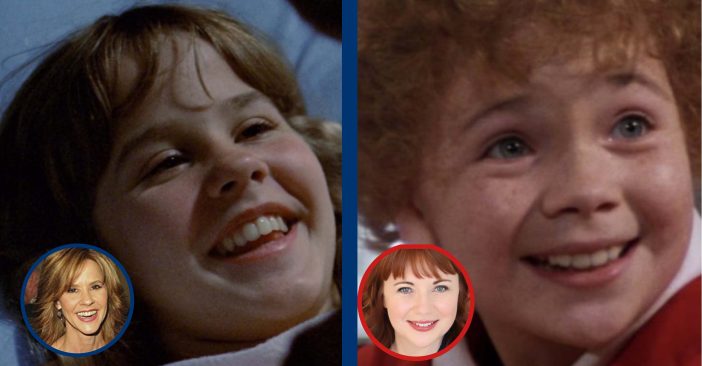 Gary Coleman was the child star in the ’70s and ’80s, starring in shows like Diff’rent Strokes, The Fresh Prince of Bel Air, Married… With Children, and more.

He would soon go on to star as himself in later TV series for millennials like Drake and Josh and Robot Chicken, retiring before he eventually passed away in 2010 from a subdural hematoma at the age of 42.

Harvey Stephens is best-known for his role as the creepy little boy in the 1976 film of The Omen. After that film, he only went onto appear in one other film in 1980 called Gauguin the Savage, which was a TV movie and played the role of tabloid reporter #3 in a remake of The Omen in 2006.

Otherwise, he’s been very quiet and focuses more on his family these days!

Denise Nickerson is remembered for her role as the gum-chewing Violet Beauregarde in the 1971 film, Willy Wonka & the Chocolate Factory. She would go on to appear in several more TV series and movies but would retire from acting after 1978 to work as a nurse.

Some of the TV series she’s dabbled in over the years include The Brady Bunch in 1974 and The Magical World of Disney in 1978.

Peter Ostrum, another Willy Wonka & the Chocolate Factory alum, starred as Charlie Bucket in the 1971 film. Despite starring as himself in a number of documentaries and TV shorts over the years, he hasn’t done much in the film industry since he retired after his Willy Wonka days.

Most people see this name and it sends chills down their spine! Linda Blair is best-known for her role as Regan in the 1973 film of The Exorcist. This role would open many more doors for her to appear in more TV movies and films throughout the ’70s, ’80s, and ’90s. She’s been less active in the 2000s, but still has a film in post-production called Landfill.

She spends her spare time doing charity work these days, partly with her own foundation, The Linda Blair Worldheart Foundation, which provides a safe haven and lifelong care for animals. Below is a great interview with Linda Blair about her experience filming one of the most terrifying movies of all-time!

Sara Gilbert is best-known for her role as Darlene Conner on Roseanne and spin-off, The Conners, but she actually began working in the acting business at a very young age, beginning with a string of commercials.

This would eventually lead to her first real role in Calamity Jane (1984) at just 9 years old. Today, she has accumulated a multitude of successes, including being an executive producer for multiple TV series. She reprised his character on the reboot of Roseanne (before it became The Conners) in 2018.

Aileen Quinn is best known for her role as little orphan Annie in the 1982 film of Annie, the role and film we all love her for. After this film, she went on to lend her voice to some TV shorts and appear in other films very sparingly, such as The Frog Prince in 1988 and The Comeback Kids in 2014.

For now, she continues to sing in a band and teach master classes in theatre all over the United States.

Mary-Kate & Ashley Olsen were best-known for sharing their role as Michelle Tanner on the TV sitcom Full House.

The twins went on to create their own Olsen empire and star in their own series of videos and other films in the 2000s before quitting film permanently. Both of them are building a fashion empire currently and are completely off social media.

Jodie Sweetin is another Full House alum who got her start young in the acting business, even before Full House. Sweetin had it pretty rough growing into her adolescent years, struggling with substance abuse after her hit series ended and she adjusted to life after.

However, she was able to get back on her feet, got sober, returned to acting, and has two beautiful children. She currently stars on Netflix’s Fuller House.

RELATED: 16 Iconic Television Stars: Photos Of Then And Now

What about The Facts of Life actresses, how did their lives change? Let’s find out about these former child stars!

Do you remember any of these names and faces? Be sure to SHARE this article if you do!