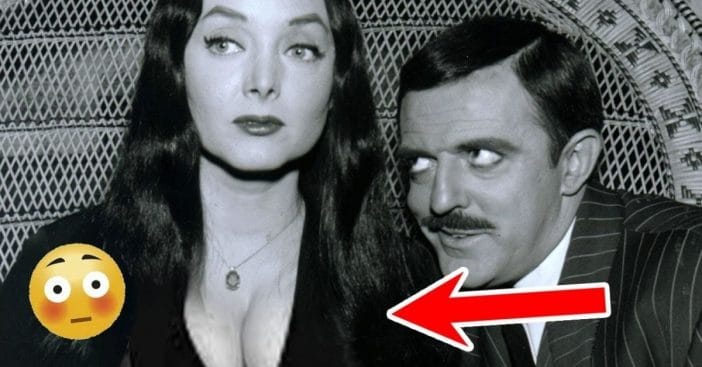 They’re creepy and they’re kooky— and so are these facts. It makes sense that a family of monsters would have some skeletons in their closet. However, the ones that weren’t friends with the members of the Addams Family, are pretty surprising.

Do you dare dive into Cemetary Lane with us? To learn the truth about The Addams Family, we’ll go through all of the quirks that made the series everything that it was.

Unlike The Munsters, which used Universal Studios’ plentiful vault of copyrighted mythical beasts, The Addams Family had to use original characters— sort of. They all came from a 1938 comic strip by illustrator Charles Addams. Ah, it’s all coming together now. But in the comic strips, there were no official names. Cousin Itt wasn’t in the original strips either! Show producer David Levy suggested the character, and Charles Addams started including the big pile of hair in new strips so readers would get an early intro.

RELATED: Whatever Happened To Jackie Coogan From ‘The Addams Family’?

The Addams patriarch had two name choices: Repelli and Gomez. Ultimately, John Astin both won the role and the right to choose his character’s name. When it came time to name an Addams child, their first choice was Pubert. Network executives weren’t thrilled about how that name sounded, so they went with Pugsley instead, which is still silly but at least sounds a bit better. Of course, Pubert would rise again, in the movie.

TV and film composer Vic Mizzy would have two huge theme credits to his name: Green Acres, and The Addams Family. Both extremely popular, but of the two, Mizzy would admit that The Addams Family made him his fortune. And it was as easy as a snap— he’s quoted saying, “That’s why I’m living in Bel-Air. Two-finger snaps and you’re in Bel-Air.”

There was a little more to it than that, and even though the credit made millions later, the studio didn’t want to spend the cash back then. That trio of singers belting out the lyrics is actually just one guy, with his voice played over a recorder to loop the sound, all so they didn’t have to pay for more singers. They’re Kooky and they’re Crafty.

It’s nearly impossible to picture anyone else playing Gomez. Or Lurch for that matter. However, when John Astin auditioned for the show, he wanted to play the butler Lurch, who didn’t have a name at that point. However, the showrunners felt his talents belonged in a bigger role- well more important role, not bigger, so took on the patriarch.

Meanwhile, Ted Cassidy, who did end up playing Lurch has another role entirely. I gotta hand it to him, he can switch between Lurch and The Thing so easily! What a talented right hand. Actually Sometimes we saw his left because Cassidy liked switching it up to see if anyone noticed.

When people did get to see Cassidy as Lurch, they liked what they saw, a lot. In fact, teenage girls would flock to him in the street and fawn over him, with some declaring him more handsome than all the Beatles, the standard unit of hotness back then.

Also worth noting, the willowy Carolyn Jones is unmistakably the face of Morticia Addams, but a very musical someone else almost was. Cher, with her long face and even longer dark hair, reportedly really wanted to give the role a try. I can see the likeness. Maybe she could have sung the theme, too.

Jackie Coogan nearly wasn’t the Uncle Fester we know and love; at first, he was rejected. But he came back for more auditions, this time with a shaved head, did his own makeup and dressed in costume, and convinced producers to bring him on through sheer dedication.

What’s In A Name

Let’s start with the most famous bundle of syllables: the precisely imprecise dialogue of Cousin Itt. If you weren’t a member of the family, you had no clue what Cousin Itt was gabbing about. But get this: neither did the people behind his voice. To capture this garbled chatter, one of the producers would babble into a recorder. Then, for Cousin Itt’s speech patterns, they’d replay the recording at high-speed to make it quite impossible to figure out.

Back to the Future

The Addams Family was a bunch of trendsetters. And I don’t just mean Gomez’s stylish stash or Morticia’s elegant dresses. Even in the Tech Scene. Computers were on the rise but not just for NASA anymore. And The Addams Family featured the very first scene of a home computer in television history. It was the UNIVAC and debuted at Cemetary Lane years before Batman would get a computer for his Batcave.

Believe it or not, The Addams Family is still relevant in the tech world. There is, in fact, an Addams Family pinball machine, complete with disembodied hands that pick up the ball, and audio recorded by the original cast. With sales of 20,000 units as of 2017, it was ranked the best-selling pinball machine of the age.

The Addams Family had to please the censors, and one of the age-old battles was displays of affection. They couldn’t be shown in the same bed together, or even in a bedroom for too long. However, Carolyn Jones and John Astin worked hard to make their couple authentic. Gomez’s kiss-up Morticia’s arm is a direct product of that; since they couldn’t do passionate kisses on the mouth, he found a clever way to express his love.

And it worked! The series was widely praised for representing solid values, it had a husband and wife who didn’t fight, and who took good care of their children.

Not all trends are planned. Ted Cassidy’s reliable butler Lurch was at first entirely mute. But one day during the rehearsal of a scene, he put his improv skills on display when he suddenly ad-libbed the famous “You rang?” The audience got such a kick out of it, the writers gave Lurch lines from then on.

Ken Weatherwax adorably played young Pugsley, but the actor battled some less adorable hurdles. He was allergic to wool, and of course, all of the costumes seemed to have some of it stitched in. To get around this, Weatherwax’s mom had to buy all his costumes special, to ensure their contents.

And what is Gomez without his mustache and signature cigar? Astin admitted he actually had a smoking habit and brought that with him to the character. And It helped that Dutch Masters Cigars became a show sponsor. Gomez was also famous for pocketing his lit cigar. To keep so the costume designers lined his pockets with the wonderful, horrible cure-all … asbestos! Yikes.

Let Me Put My Face On

Just a regular makeup session can take a good deal of time. Imagine having to get layers caked on to look ghostly like Morticia. Carolyn Jones would require 2 hours to get all her makeup administered. And for the remake, Anjelica Huston needed 3 hours. Early makeup calls were not uncommon, and Jones needed to be in her chair at 4 am on some days.

John Astin grew up in a rough part of New York City, so he had to learn some things the hard way. One lesson was that if he wore a manic stare during his trek from apartment to subway, people didn’t bother him. That became the source for Gomez’s classic wild stare.

You rang? Step right on in, to 001 Cemetery Lane. Or I should say, 21 Chester Place, Los Angeles. The real property only had two stories and looked rather normal. So, special effect techs added a third story and a tower to make it look more menacing. They definitely succeeded, but all that work rarely shows up. The full exterior is only visible in the first episode.

Before that, those rooms were seen in the movie The Unsinkable Molly Brown.

As for the original house, its purpose had been served, so It ended up dissolved into a parking lot, and the only original part standing are the six driveway globe lights.

It’s hard to believe this show only lasted two seasons. A pop culture goldmine. Despite that popularity, the actors got the short end of the stick. Fitting their house of horrors a little too well, the actors’ piggy bank is full of more cobwebs than dollars. They earned residuals for just five reruns. John Astin went on the record basically saying he cared more about communicating than earning the big bucks, but it was still a sour deal.

Show creator David Levy wasn’t so ready to get robbed. When The Addams Family movie emerged, he fired off a lawsuit for $50 million, because the movie had, quote “appropriated his ideas and concepts” with the Thing and Itt. Paramount ended up settling out of court.

In the child acting system, assuring the child has money set aside for his work is a matter of Law and Fester. The Jackie Coogan Law, named after Uncle Fester, was a response to his own trials as a child actor who had his earnings spent by older relatives.

What a creepy family that crawled its way into our hearts and stayed after all these years. Who was your favorite member of the Addams family? Which fact surprised you the most? What TV show should we dust off the cobwebs of next?

Click for next Article
Previous article: Classic TV Actors Who Rose To Fame From Their First-Ever Role
Next Post: Susan Sarandon Was Surprised By Brad Pitt While Working With Him In ‘Thelma & Louise’