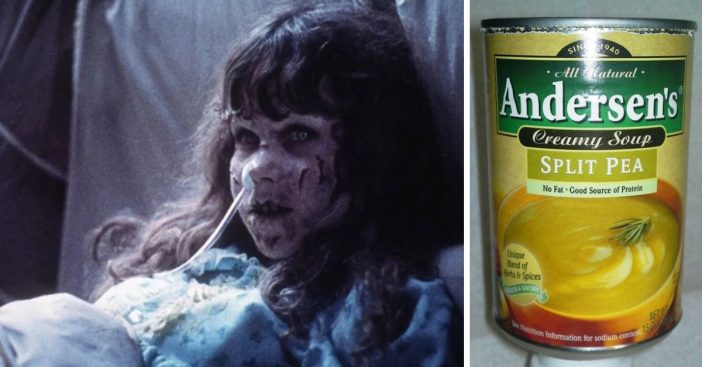 The original Exorcist film starring Linda Blair was released in 1973 and remains one of the most disturbing and horrifying classic horror movies to date. Everyone remembers the most iconic scenes from the film that had people running out of the movie theatres in fear. You might have been one of them!

One of the most memorable scenes in the film is when the main character, Regan, is completely possessed by the demon Pazuzu (who disguises himself as the Devil) and spews vomit all over Father Karras. While it actually does look like projectile vomit (ew) it’s actually Andersen’s pea soup mixed with a little oatmeal. Apparently, the cast and crew tried utilizing Campbell’s soup, but it just didn’t have the same effect as the pea soup.

Another hilarious and fun fact about the cast of The Exorcist includes this pea soup gag. Jason Miller, who played the memorable role of Father Karras, had a completely authentic and genuine reaction to the pea soup. Director of The Exorcist, William Friedkin, apparently told Miller that the pea soup would only hit him in the chest. Well, he got a lot more than that, prompting a completely unscripted reaction.

The scene only required one take!

This scene, in particular, was actually enough to make a few of the audience members nauseous, too! This became such a frequent thing that some movie theatres even began handing out barf bags with the movie tickets.

This film is truly a classic unlike any other, for many creepy and disturbing reasons. Many of the cast members truly believed that the set was cursed and, with this belief, nine people died during the making of the film. Additionally, the movie has been banned in certain countries for being bought or sold.

The film, altogether, has grossed a total of $441,071,011 worldwide and it became the second most popular film of that year, right behind The Sting in 1974. The film received a mix of positive and negative reviews, some of the critical ones calling it a ‘practically impossible film to sit through’ by Vincent Canby with The New York Times.

Despite even the harshest of criticism, the film has established itself as a horror classic beloved by millions. The movie itself and several cast members received multiple award recognition for their work, including 10 Academy Awards and 4 Golden Globe Awards. The Exorcist continues to thrive off of sequels, remakes, and parodies that have been produced throughout the years.

Be sure to SHARE this article if you remember seeing The Exorcist for the first time! What did you think? Don’t forget to watch the full “pea soup” scene below! We hope you have a tough stomach!