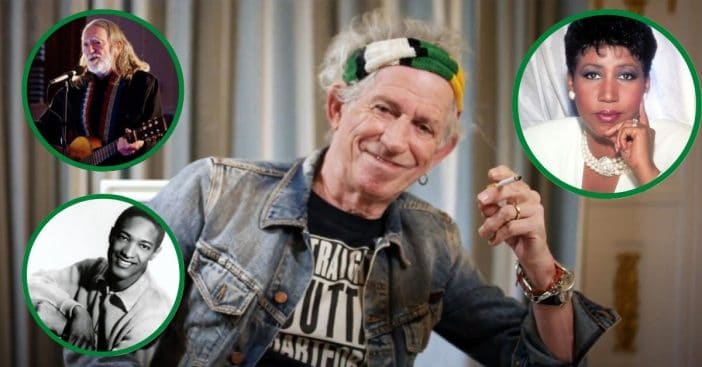 Artists almost inevitably always draw inspiration from some other artists. Just as many will have favorites whose influence and praises they themselves will sing for the ages. Rolling Stones frontman Keith Richards weighs in on who he considers his favorite singers, who he also considers the greatest in the industry.

Richards himself, 78, has long solidified his own place in music history, both as one of the leading forces behind the Stones and as a musician in his own right. The Stones’ heightened success coincides chronologically when Richards took up singing for the group, in addition to his other responsibilities. But who does the Rock and Roll Hall of Fame inductee consider the greatest singers of the age? This list is ordered by when each artist was born, with the exception of the last entry, who is Richards’ favorite singer of all time, the best of the best. Do you agree with his selection?

Born around April 4, 1913 as McKinley Morganfield – his exact place and date of birth are not known – the father of Chicago blues got his nickname because of his love for playing out in the dirt, though “Waters” was added only when he started playing harmonica as a teen. He got his start singing in the church choir before buying his own guitar before determinedly chasing his dream of becoming someone in the music industry.

Waters ended up doing just that in 1960 with his first studio album Muddy Waters Sings “Big Bill.” Waters was first inspired to pursue music after hearing himself on a recording, which taught him he sounded just as good as established professionals. He went on to win six Grammy Awards and four of his songs earned Rock and Roll Hall of Fame induction. He directly influenced one of the genres Richards would become known for, making him an easy favorite for the Stones songwriter.

The King of Soul was born in 1931 and introduced his distinctively velvety voice into the music industry from 1951 to 1964, though technically he was already at it at the age of just six with his siblings in a group they called the Singing Children. Cooke is an alum of Chicago’s Wendell Phillips Academy High School, which also counted Nat King Cole as one of its attendees.

Cooke’s solo career includes eleven studio albums, Rock and Roll Hall of Fame induction, and a star along the Hollywood Walk of Fame. In addition to being a favorite singer of Keith Richards, Cooke is also ranked as #16 in Rolling Stone‘s list of 100 Greatest Artists of All Time, and posthumously received a Grammy Lifetime Achievement Award to back that ranking. Cooke worked right up until his death in ’64.

Between his birth in 1931 and his passing in 2013, George Jones released 87 studio albums, 43 compilation albums, eight tribute albums, and three live albums, culminating in his status as one of the greatest singer-songwriter musicians of all time. Although he was nicknamed “the possum” because of his face, Jones is also considered “The Rolls Royce Of Country Music.”

Over 160 chart singles explain this honorific. “White Lightning,” which launched him into the spotlight, remains one of Jones’ best. Though alcoholism caused Jones to miss some performances until he sought long-term sobriety, his legacy remains strong enough that Jones is also a favorite singer to Johnny Cash.

Willie Nelson was 40 when his 1973 album Shotgun Willie helped make Nelson a household name, exacerbated by the success of Red Headed Stranger and Stardust in ’75 and ’78 respectively. Now known as one of the most prevalent and recognizable artists in country music, Nelson is also an advocate who rescues and cares for horses.

Nelson’s discography includes 71 studio albums, and in addition to being a formative figure in the development of the outlaw country subgenre of music, Nelson is also a film star with over 30 movies to his name. Richards considers Nelson one of his favorite singers after the artist endured the Great Depression and started his craft when he was just seven.

Born as Charles Hardin “Buddy” Holley on September 7, 1936, Holly came from a musical family and grew up during the Great Depression. Just as he is a favorite to Keith Richards, sources of influence for Holly include rhythm and blues, country, and gospel. By the early ’50s, Holly was an opening act for Elvis Presley and knew this was the path for him.

Holly became a frequent sight on television since 1952, starting local before appearing on The Ed Sullivan Show. By 1957, his album The “Chirping” Crickets reached #5 on the UK Albums Chart, making the British Invasion more like a cultural exchange in the early years. Indeed, Holly is credited as a major source of inspiration and influence for many key players in that era of music, including the Rolling Stones, the Beatles, Elton John, and Eric Clapton. That’s not even including his influence outside of the British Invasion bands; he also influenced Bob Dylan and Elvis Costello. It seems safe to call Holly a favorite singer to many people besides Richards.

Born in ’41, Aaron Neville is still with us today even though he is technically retired. To date, the R&B artist has four platinum albums and four Top 10 chart-toppers in the United States. Neville started as a regional hit in his native New Orleans.

Today, Neville is technically retired and has formed a musical family of his own; his son Ivan has an album entitled If My Ancestors Could See Me Now, which boasts the Top 40 hit “Not Just Another Girl.” Keith Richards got to play alongside the son of one of his favorite singers when Ivan played keyboard for him during his first solo tour.

Reggae pioneer Toots Hibbert was born in Jamaica in 1942 and went on to become the singer-songwriter for Toots and the Maytals. In addition to netting a Grammy Award for the band’s album True Love, Hibbert is also credited with likely giving the reggae genre its name with his 1968 song “Do the Reggay.”

Hibbert got his start by singing church choir and gospel music due to his parents’ backgrounds as ardent Seventh-day Adventist preachers. When the advent of reggae arrived, Hibbert ushered it in with gusto and produced songs that people couldn’t help but dance to, characterized by his throaty growls that helped define a genre and mark him as one of Keith Richards’ favorite singers.

Only one living reggae musician can claim to hold the Order of Merit, bestowed by the Jamaican government as the highest form of praise for contributions to the arts and sciences, and that is Jimmy Cliff, born in 1944 as the artist who would help reggae become an international household name.

Not only was Cliff a musical artist; he was also a film star, and his performance in 1972’s The Harder They Come is credited as an important vehicle for popularizing reggae around the world. Having been to Jamaica himself, Richards actually got to meet Cliff, along with bandmate Ronnie Wood.

Known first as Ingram Cecil Connor III, Gram Parsons’ life lasted all of 26 years since his birth in ’46, but in his short life and shorter career, he helped establish a characteristic blend of rock, soul, folk, and rhythm and blues he referred to as Cosmic American Music.

Parsons was not always a solo act and has famously been a part of the Byrds, the Flying Burrito Brothers, and the International Submarine Band. It was during his time with the Byrds that Parsons frequently crossed paths with or even consulted the Rolling Stones, including Keith Richards, who got to advise one of his favorite singers when Parsons debated performing in South Africa as apartheid unfolded; Parsons ultimately left the band due to his related concerns about the tour. It was to Richards that Parson turned after leaving the Byrds and even stayed at the musician’s house. The two became easy friends and Parsons updated Richards on the latest in country music.

The Queen of Soul came into this world in 1942 and her reign began in 1954 until her death in 2018. A singer, songwriter, and pianist, Aretha Franklin set off on her music career in earnest at the age of 18 and, after a rocky start, became a hit under Atlantic Records. She accumulated 112 charted singles on Billboard and has sold over 75 million records around the globe, making her one of the best-selling musical artists ever.

Her own sources of influence included Marvin Gaye, Sam Cooke, and Ray Charles. It’s easy to see how the R-E-S-P-E-C-T can be cyclical among artists; many of Keith Richards’ favorite singers found influence in one another while also inspiring some of those very same people. Do you agree with this list? Who is your favorite on here?

Click for next Article
Previous article: ‘The Love Boat’ Icon Gavin MacLeod Passed Away At 90 This Year After A Successful Career
Next Post: See 1973 Caboose Transformed Into Airbnb By Father And Daughter Team