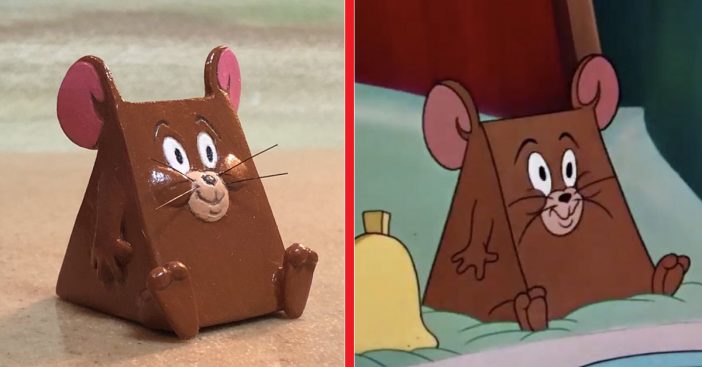 Who can forget the excitement of settling down for some cartoons? They provided fun, easy, colorful ways to lose ourselves and forget the present in favor of the show. Characters in those shows might not like their situation as much, though. In particular, Tom the cat from Tom and Jerry didn’t have a lot to look forward to. He represented the basis for a lot of slapstick humor that, really, was probably very painful. That show’s imagination makes it stick with us years after, though. So much so that a Japanese artist recreated some iconic moments as sculptures.

At the time, Tom and Jerry already represented a major feat in media. Viewers could enjoy simple yet fun colors and the unchecked physics animated characters can pull off. Tom and Jerry also became synonymous with intense rivalry – and really defined the “cat and mouse” game dynamic. Often, Tom came out worse for wear. But his antics made for some great poses. Taku Inoue took advantage of these creative stills and made them into sculptures. Here are some particularly amazing recreations!

Tom and Jerry took full advantage of that wackiness – and so do these sculptures. Only through a lot of whimsical imagination and artistic skill could you create something like this.

Inoue got very creative when imagining these various scenes

Taku Inoue got very creative with how he represented these iconic scenes. Nothing deterred him, no matter how outlandish. In fact, the more outrageous, the more he could flex his creative muscles.

Here we see how Inoue represents when Tom got walloped with an iron. 2D animation comes with some restrictions, especially years ago. But Inoue really represented what exactly happened during that unfortunate incident.

It would be impossible, to say the least, to pull something like this off with real actors. Fortunately, William Hanna and Joseph Barbera created a cartoon, so they had free reign to do as they pleased.

Despite how difficult scenes from Tom and Jerry would be to represent in real life, Inoue pulled it off with sculptures. He carefully manipulated the shapes to exactly duplicate even the most confounding of poses. It’s almost hypnotic!

The more the merrier

Each Tom and Jerry scene doesn’t call for only one sculpture exclusively. In fact, some can have a few parts to it. Above we saw the iron that hit Tom in the face and flattened his head. Inoue took the time to make the dangerous device and set it nearby.

Here, we see when Tom was duplicated as multiple bowling pins, likely about to be hit. It was either because of Jerry or because of his own failed attempt to catch the mouse backfiring on him. Either way, Taku Inoue perfectly captured the creative scene.

This wouldn’t be a collection of Tom and Jerry sculptures without the titular mouse. Our favorite cartoon sculpture took time aside for Tom’s nemesis, though he seems to be having a better time than Tom would.

Despite being contorted into the shape of a cheese wedge, Jerry appears pretty content with the situation. Who can blame him? He just had a healthy dose of his favorite food! Inoue perfectly captures his expression – and overall appearance – with almost alarming accuracy.

Art with a purpose

Tom and Jerry and other such cartoons are timeless. One glance at any of these sculptures, no matter their shape, size, or situation, tells you immediately what they’re from. Sometimes, they can timelessly serve a purpose, too.

Poor Tom can never catch a break, can he? Inoue did such a good job with this step stool sculpture of Tom it looks like it could be a handy way to reach higher places. I don’t think Tom would appreciate that, but whoever said art is just for looking at?

Not even Jerry got out unscathed

Because Tom and Jerry is such an enduring title, it was only a matter of time until Jerry had some strange encounter, as depicted in this sculpture. We’re well accustomed to seeing Tom in some odd shapes, but it’s then very odd to see the mouse looking different.

But, again, this show really laid the foundation for slapstick comedy. As a result, Jerry too came upon some wacky situations himself.

Taku Inoue creates the illusion of depth in every scenario

Already, because we’re moving from a 2D cartoon to 3D sculptures, we see an increase in depth. Yet Taku Inoue manages to deepen that sense even further.

In the cartoon, we see the scene on the right and understand Tom is folded up on himself, a bit like an accordion. We don’t have to see the rest of him to know it’s there, however pancaked he may look. Yet even though Inoue didn’t need to make a full-sized Tom sculpture and flatten it, it still almost looks like he did. His recreation of this scene is like an exact replica, complete with a newfound sense of depth.

As seen with the iron, cartoon characters can be shaped to resemble typical household items. The absurdity may be unbelievable, but we understand the idea behind it enough to get quite the laugh from it.

We can also appreciate this fun approach through these sculptures. Once again, Inoue provides his own props that literally shape the characters. Art requires a surprising amount of math and spacial awareness. Making his own shovel may actually be an important move to maximize accuracy, so all ratios are correct.

These Tom and Jerry sculptures would make great display items

If you’re on this site, you know the strength behind nostalgia. We appreciate the power of memory and fondness to its utmost potential here. That’s why, when seeing these spectacular sculptures, they immediately look like beautiful pieces to collect and reminisce with.

Imagine shelves of these altogether, perfectly recreating iconic scenes from such a famous cartoon. Or perhaps tastefully spotted around a themed room to help it be fully old school. Some of them even look cute and whimsical enough to be toys, though I’d never want to risk these breaking. At the end of the day, we’re just very thankful for Taku Inoue for sharing his remarkable talent for us to enjoy.