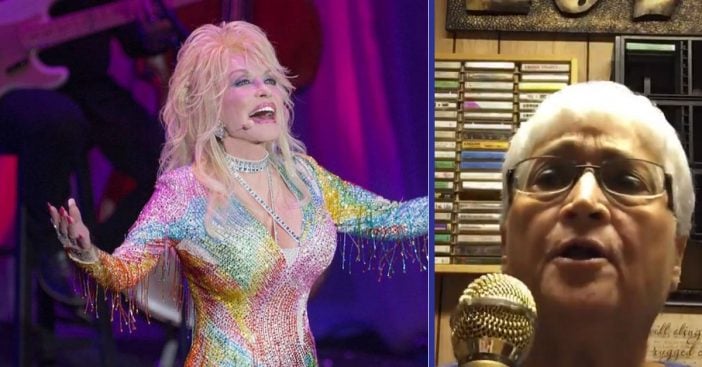 About 46 years ago, Dolly Parton released her memorable song, “Jolene.” Since then, the song immortalized itself in our hearts. Since then, it came to permeate into our very culture and earned itself worshipful praise by fans. While some listen to the song from a distance, others have hastened to participate in the new #JoleneChallenge. From this movement has stemmed some truly remarkable performances worthy of the source material.

The #JoleneChallenge has some pretty influential backers. Parton herself is working with Julianne Hough, who is portraying Jolene in the upcoming Netflix series Heartstrings. Heartstrings is an anthology of stories based on Parton’s songs. Fans can begin enjoying the show on November 22. Originally, Parton wrote “Jolene” after a banker flirted with her husband, and so the lyrics implore Jolene not to steal her beloved. Together, Parton and Hough issued a challenge to fans to present their best rendition of the 1973 classic song. Those who want to share their work should post it under #JoleneChallenge. For music enthusiasts, here are some of the best responses to come from that challenge.

The #JoleneChallenge has attracted younger audiences to show off their voices

Could not pass up this challenge! I Love you Dolly!! Please retweet and use the hashtag #JoleneChallenge and share! @DollyParton @juliannehough pic.twitter.com/wmR9LrXjeC

It seems no one can resist trying their hand at this catchy number. Self-proclaimed “small town girl with big dreams” Ansley Burns answered the call with a stunning rendition of “Jolene.” With no elaborate set except a fireplace and no music accompanying her, the focus is entirely on her voice.

RELATED: This 1975 Rendition Of ‘Jolene’ Is A Reminder Of Why We Fell In Love With Dolly Parton

It turns out Ansley is a powerhouse of vocal talent because her version of “Jolene” stands on its own with her voice alone. She’s already earned over 800 views!

Some singers show off multiple skills

Twitter user @YouTarzan68 offers a version of “Jolene” that is nothing short of haunting, even mournful. This suits the subject of the song just fine, as the idea of a woman losing her beloved is quite frightening.

Not only did this Atlanta native show off a strong voice but she also proved to be quite good at playing the guitar. Her own instrumentation accompanied her strong, somber singing for a very memorable performance. It’s no wonder commenters have voiced respect and joy at hearing this.

Art is all about creativity

#JoleneChallenge I wrote this today, Dolly you mentioned you wanted something creative so I wrote it from a mothers point of view. I am Laurie Danks and my musical buddy Will Chalmers on the guitar.@DollyParton pic.twitter.com/aWrT5kWY1b

The idea of a woman stealing away a man can be approached from multiple angles. Some might follow the path of a heartbreaking romance plot where the abandoned woman finds someone faithful. Others might see the perfect recipe for a romcom. Dolly Parton knows how powerful and universally relatable and enjoyable her song is. As a result, she and Hough asked singers to be creative with their approach.

Laurie Danks answered this call and then some, singing for the #JoleneChallenge as a mother watching her son fall in love and be swept up and away by the romance of it all. With Will Chalmers on the guitar, this entry into the challenge presented another interesting perspective that can fall into multiple genres, depending on the artist. Some might think of such a scenario and recall comedies like Monster-In-Law, while others feel a tender grief in their heart at watching their boys become men. Danks and Chalmers certainly put a creative twist into their performance.

It’s never too late to get in on the challenge

#JoleneChallenge
I just turned 65. You are never too old to do the things you have passion for. I sing because it makes me happy and hopefully others enjoy it. I am GWYNNE FREYTAG from WAPAKONETA, OH. Where 50 years ago a man dreamed of going to the moon and did. I sing. 🎶 pic.twitter.com/TQjUCIQztc

At 65, Gwynne Freytag proves anyone can and should participate in the #JoleneChallenge. Music seems to be built into her very DNA, as Freytag’s Twitter handle is @songbirdgf and her bio boasts, “There is and always has been a song in my heart.”

She shows off that love of music in her rendition of “Jolene.” The Ohio resident finds joy in singing and hopes others do in listening to her. It’s impossible not to, as this proud senior has a powerful, lovely voice that definitely does justice to the original song. Viewers expressed similar beliefs in their comments.

Partnering up just doubles the greatness

While many renditions are solos, or one individual singing and another playing an instrument, this duo teamed up and both song. Ultimately, the results gave us a very strong performance. The two young men sang while music played elsewhere.

This freed them up to focus on letting their vocals shine. Both have excellent voices and perfectly captured the lighter side of this song. Their version held plenty of emotion and levity in a remarkably well-balanced manner. The men’s performance even featured quite a bit of emoting and excited gesturing, just like an excited performer might do at a concert.

Sometimes you have to answer the call from anywhere

By far my favorite song to sing!! #JoleneChallenge ❣️🎶 pic.twitter.com/TiwnPFf9yM

Madison Terry responded to the #JoleneChallenge outside the comfort of her home. Despite being in a foreign, less comfortable setting, she and her musical partners had no problem performing “Jolene” with all the talent and nuance the original boasts.

Her hundreds of followers got a real treat when she shared her favorite song to sing. That passion is clear in every word sung and every chord played.

Lexi is an amazing artist and I can't wait to see where life takes her. @DollyParton if you haven't heard already, check my girl out. @_alexandrakay #JoleneChallenge https://t.co/YK6dqUE6Zj

The #JoleneChallenge brings a lot of joy to a lot of people. Listeners get some amazing content to enjoy. Performers can proudly show off their hard work. Even supporters observing from the sidelines have a lot to be happy for. Such is the case with young Alexandra Kay and her biggest fans.

Supporters took to Twitter to further share her remarkable performance. This girl has a powerful voice and presence and is clearly unafraid to perform with the song. We hope Dolly Parton sees this too, Danielle!

The amazing @DollyParton is asking fans to post a video of their rendition of “Jolene”. Y’all know that we’ve been playing our take on her classic since we launched Cloverdayle. So…here it is!! Retweet, share and do your social thang. ❤️ #JoleneChallenge pic.twitter.com/13yH4rShJM

Musicians of all backgrounds are giving it their all for the #JoleneChallenge. Whether they are aspiring artists or established performers, no one can pass this up.

Cloverdayle has a steady following who love the Nashville-based husband and wife duo. The married couple writes on their Facebook that they are not “in search of fame, fortune, or record deals.” Rather, they want to challenge themselves. Turns out all that hard work was well worth it, and a later tweet by them claims “the legend herself liked our post.” I hope that is indeed the case because these two deserve the recognition.

Singers be advised: emoting is also part of the performance

User @yelyah_77 shared a short but memorable #JoleneChallenge video. In it, her own “little dolly” proves that a successful music video requires more than a nice voice. When putting on a performance, the whole body must go into it.

For this reason, this little girl’s sassy expressions are absolutely perfect for the song and challenge. She has little gestures and even purses her lips. Years from now, Jolene better not steal her man, because this gal won’t stand for it!

All stories have multiple viewpoints

More people took Parton’s request for creativity to heart. We’ve seen versions sung by a solo artist, a couple, a betrayed lover, and a saddened mother. Twitter user @CraigRonson presents an unexplored perspective from the view of the man falling for Jolene.

While the fictional man’s disloyalty isn’t something to be praised, this man’s singing absolutely is. Inspired by the tale Dolly Parton wove with “Jolene,” this singer shifted the camera’s focus and provided an artsy video complimented by a smooth, tender voice no one is soon to forget. There are even more amazing performances populating the #JoleneChallenge hashtag, and you are advised to see them all. Through their own talents and creativity, Parton and Hough inspired hundreds of people to share their talents.

RELATED: Pink Tears Down the House with “Jolene” Paying Tribute To Dolly Parton