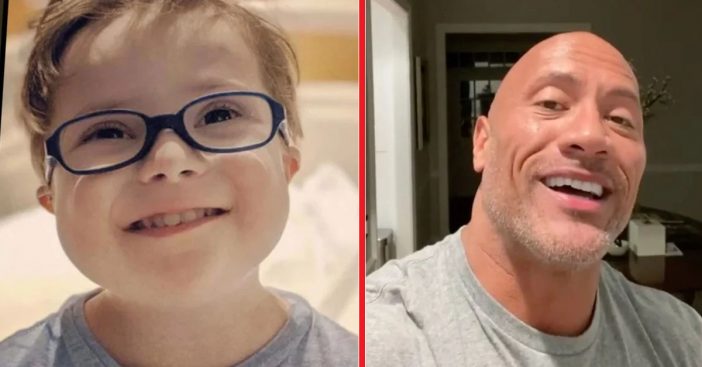 Dwayne Johnson, “The Rock”, recently surprised a three-year-old with cancer by singing a song from Moana. In Moana, Dwayne voices the character Maui. Dwayne shared a clip of him singing to the young boy and shared his story as well.

Dwayne captioned the clip, “This request came across my desk and punched me in the gut a bit. There’s a little 3-year-old boy out there named, Hyrum Harris. Diagnosed with acute lymphoblastic leukemia which is complicated by Down Syndrome. In the fight of his life right now and doing his best to stay strong – by watching MOANA up to 10xs a day because the character he loves, MAUI makes him feel strong.”

He continued, “According to Hyrum’s mama, his most important thing to say now is, I STRONG. Yes, you are big man. Yes, you are. Hyrum, I know I’m a complete stranger to you – who sounds a lot like your hero, MAUI (only with a very large head), but myself along with millions of other strangers who will watch this video are sending you so much love, strength, and mana your way. I STRONG. Love, the Rock aka the dude who sounds a lot like Maui.”

In the video itself, he also shared who the message was for. He introduced himself to Hyrum without revealing that he was the voice of Maui. He said, “I heard that you love a movie called ‘Moana,’ which is crazy, because I love that movie, too. And I also heard that you watch ‘Moana’ almost 10 times a day because the character you love, Maui, gives you strength.”

The Rock has a Heart as big as he is…

Dwayne then sang the song “You’re Welcome” from Moana for the little boy battling cancer. After he sent the video to Hyrum, his mother spoke out. She wrote on Facebook, “As a family, our hearts were touched when we received an email containing a video from Dwayne Johnson. Hyrum’s reaction was just as beautiful.

It was an intimate moment we were able to then share with our extended family and friends. Today we were blown away as Dwayne shared the video, he made for my sweet boy, on his social platform.”

Later, Dwayne shared an update. He said, “Look at this lil’ boy, Hyrum’s face. That’s some joy real right there. Thank you to the person who wrote this beautiful note. You’re absolutely right – joy and hope cost nothing and yet, is the most powerful gift we can give. That’s the real magic to life. #hopeforhyrum And thank you to my good buddy, Andy Fickman for texting me Hyrum’s story to begin with.”