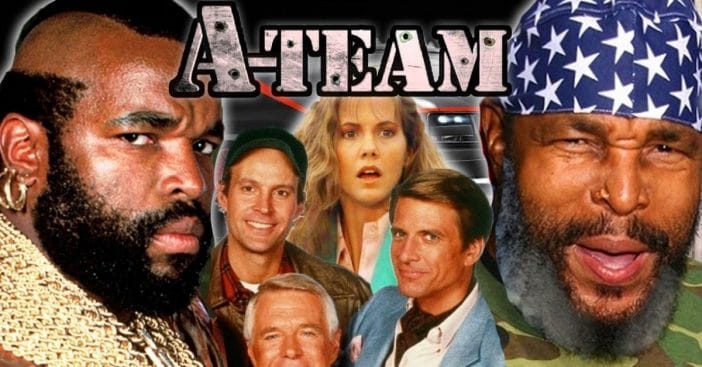 Gather round, team. From this day forth, everyone is a soldier of fortune. Today, that fortune is knowledge. In 1983, a team assembled to turn the tide on their own bad luck. Those men became known as The A-Team, a special forces unit united by  the crime they never committed. Luckily, the cast could live way more freely than their on-screen counterparts. But what exactly did they get up to after this iconic action show ended?

The A-Team cast made this show into a mixture of action and comedy, that in part helped rescue NBC in the ’80s. Constant bickering between B.A and Murdock, along with chemistry between all four characters, kept viewers enthralled for five seasons. And the show presented all these shenanigans in a remarkably family-friendly format despite the high levels of action. Catch up with this unique team here.

The show, like The Rockford Files and Wiseguy (among many others) was created by Stephen J. Cannell, who a;t one point before hie death commented, “I really hesitate to say that any of my shows influenced other writers. We’re all mining the same fields. It’s hard for me to look at someone else’s show and say, ‘Oh, that’s from The A-Team.’ I never feel that way, But once you put something like The A-Team on the map, it does become part of the DNA of television. People grab little pies of it. I certainly grabbed little pieces of other people’s shows when I was creating my own shows.” Well, whatever he may or may not have “grabbed” from other shows in the case of The A-Team, it obviously worked.

As to the origin of the show, he related to GQ, “The creation of The A-Team was interesting because it was [late NBC executive Brandon] Tartikoff’s idea. He said, ‘Remember The Road Warrior? It’s like that, but not that. Remember Belker that crazy guy on Hill Street Blues—that guy could be in the show. And you know that guy Mr. T in the Rocky movie? He drives the car.’ And that was the pitch. I was with [writing/producing partner] Frank Lupo. We went to the commissary and I said, ‘What the hell was that? I think he’s telling us break all the rules.’ I always wanted to do a show on soldiers of fortune and it was a midseason order and he needed it right away. Brandon’s pants were on fire then, they needed a script in 12-15 days. It was a real hurry-up job. Frank and I took every character we came up with and twisted it further. The pilot is insane, it has an invisible dog, and they’re on the run from the government.

“We put it together,” Cannell continued, “didn’t have much time to plot everything, so we ripped off the Seven Samurai/Dirty Dozen plot of a little Mexican village that’s being terrorized. Brandon hadn’t pitched me the show, but he pitched me the attitude, which was really clever. He was one of the best execs ever. That was a huge show, developing one hit after another and that was the start of the NBC dynasty. We lit up that time period and gave them a promotion base.”

When it came to plans coming together, John Hannibal Smith was one guy always at the ready. This proved exceptionally lucky for him since he and the team got into some outrageous stunts. Fortunately, Hannibal thrived on thrills, usually drawing on his iconic cigar, before spouting some highly quotable line of dialogue. When forming The A-Team cast, producers chose well with George Peppard who was actually a U.S. Marine in the ’40s. He even rose to the rank of Corporal. Additionally, Peppard studied to become a pilot after completing his service as Semper Fi, Corporal.

RELATED: Taking A Look At The Cast Of ‘Gunsmoke’ Then And Now 2022

This action icon was nearly an oil tycoon. Peppard was supposed to be Blake Carrington in Dynasty, but he thought the role was too much like JR Ewing from Dallas. But two years later, Peppard ended up a soldier of fortune with the A-Team. By this point, Peppard was a pretty big deal in Hollywood thanks to co-starring with Audrey Hepburn in Breakfast at Tiffany’s, but his ego took a beating as Mr. T began to take the reins of public popularity. Things only got worse after Peppard learned that Mr. T actually made more money than him, too.

This show still helped Peppard gain stardom again to a degree he hadn’t really reached since Tiffany’s. It paved the way for the TV movie Man Against the Mob, while his 1994 episode on Matlock was supposed to serve as a backdoor pilot for a series about a father and his estranged daughter working as private investigators. Unfortunately, Hannibal’s love for cigars in addition to Peppard’s cigarette habit led to the actor dying from pneumonia just eight days after that Matlock episode aired. Rest in peace, Colonel.

After getting into as much trouble as the A-Team cast got into, a smooth-talker became pretty important, correct? Naturally, The Faceman had the face to charm anyone while his silver tongue kept the con going. At his core, he had a good heart though; he respected faith, though that was all he’d ever commit to, to the dismay of all the ladies. That’s probably why he’s the team’s second in command, even if his rank doesn’t support that.

Actor Dirk Benedict really took flight early in his career, First, he got used to being in a helicopter thanks to second billing for the short-lived 1974 show, Chopper One. However, his big break came in 1978  as Lieutenant Starbuck in Battlestar Galactica. Shortly after, he jumped from a space warship back to a helicopter with The A-Team. They even got to make a reference to his time on Battlestar Galactica when he spots a Cylon walking around Universal Studios.

Benedict penned an autobiography: Confessions of a Kamikaze Cowboy. After that, he kept writing, including a positively scathing review of the new Battlestar Galactica reimagined. Not much after the A-Team has been noteworthy, but in 1996 he was in a decent family adventure movie titled Alaska, which also starred Charlton Heston. Benedict received another surprise in the ’90s: a surprise child from a previous relationship that had been put up for adoption without his knowledge.

As of late, he hasn’t been acting much, but did make a cameo in the 2010 A-Team reboot film. Today in his mid-70s, he plans to participate in a mini-series that’s in its early stages of planning titled After Hell.

Was Howling Mad Murdock actually mad? That’s tough to say. But Hannibal always knew he could count on this flying ace, which proved beneficial because a chopper can be a great escape vehicle. Interestingly, his actor, Dwight Schultz, started his career in 1981 with some scattered roles, including an episode of the cop show CHIPS. But it was Howling Mad that proved to be a big breakthrough, allowing Schultz to really stand out. Actually, he stood out so much, that he nearly was fired for being too big on the show, but luckily for viewers they kept this livewire as part of the A-Team cast.

After that, fans could keep seeing him in some favorites, as Lieutenant Reginald Barclay in the Star Trek franchise. He also co-starred alongside Paul Newman in the 1989 film, Fat Man and Little Boy. Then Dwight began an extensive voice acting career, including playing Eddie the Squirrel on Nickelodeon’s Catdog. He’s worked constantly with cartoons and video games since the late 90s. Most recently, viewers could hear him as the villain in 2020’s Happy Halloween, Scooby-Doo! Tune in to that mystery to figure out who the culprit is!

Today at 74 years old, he regularly attends conventions along with The Faceman. Additionally, he’s been married since 1983 to actress Wendy Fulton, who played Jean Hackney on 23 episodes of Knots Landing. The couple has one daughter, Ava, who is currently in the Marines.

I pity the fool who ever doubts the team’s Mr. Fix It, the unmistakable Bad Attitude Baracus simply known as B.A. Just be sure to have some spiked milk on hand if flying with Bad Attitude. He’s really not fond of choppers, Murdock, and Murdock flying a chopper.

Even though he had a lot of fun with The A-Team cast, Mr. T still had a few hiccups on set. When filming the season 4 premiere on a cruise ship, Mr. T experienced a loss in the family. He overcame Baracus’ fear of flying to get helicoptered off the ship before sending a whole list of demands to the producers for his return. And so Mr. T went through a very brief unemployment spell of one episode before they patched things up. Good thing, too, because Bad Attitude was already a cult icon.

Mr. T. got his A-Team job because of his other memorable role: In 1982, Sylvester Stallone cast him as a rival boxer in Rocky III. There, fans got to hear the start of that most iconic line: “I don’t hate him but… I pity the fool.” It’s also where producers spotted the opportunity to create a show just for him, and the T was actually the first piece of the A-Team. The tough guy battled cancer in the ‘90s, specifically T-lymphoma, laughing off its name as “personalized cancer.” When Hurricane Katrina hit in 2005, he rushed down to assist, and ditched all his signature gold jewelry; the amount of suffering and loss he saw was humbling

Just because he’s a career bruiser, doesn’t mean he’s not a softy with a big heart under that muscle, and that actually made him a bit critical of the 2010 film version of the show. The original A Team always had this running joke where they always showed people escaping some big explosion or crash. It was all for spectacle, not actual death or gore. So, when Mr. T saw more explicit stuff in the movie, he wasn’t a fan, saying it took away the family fun from it. Recently, he teamed up with fellow wrestling personality Hulk Hogan to host SNL and even showing off his musical moves on Dancing with the Stars. He didn’t even need any milk to pull that off! Today at 69, he’s a born-again Christian with three children, really living life to the fullest. Cause there’s never been a camera Mr. T didn’t like.