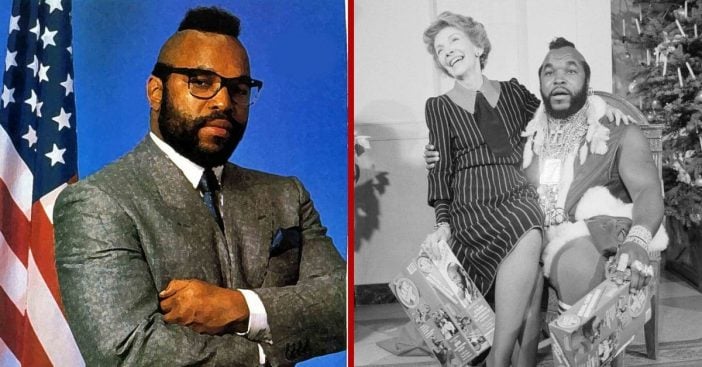 What does a former first lady have in common with a bouncer and actor? A remarkable friendship. Mr. T was friends with none other than former first lady Nany Reagan. In fact, they were on such good terms that Mr. T was on the invite list to her funeral in 2016.

Mr. T first crossed paths with Nancy Reagan when the latter approached him for an important task. She was pushing the drug prevention program Americans know today as Just Say No. She wanted him to get involved in promoting the movement. But, the actor actually stated, their history stretched further even than that.

The White House has a lot of big traditions that stretch back decades. And some are simply unique to each presidency. ABC News reports that the Reagans liked to have actors come to the White House and dress up as Santa Claus for the holidays. In 1983, Nancy Reagan invited Mr. T to be Jolly Old Sant Nicholas.

“I was one of the wildest Santa Clauses they ever had,” Mr. T reminisced. “I had my cut-off sleeves. I had my combat boots on.” Nancy Reagan fully engaged in the fun approach Mr. T took. The first lady at the time hopped onto his lap and kissed his head. The resulting picture is now one of the most famous of the two and really sums up the mutual closeness the two shared.

…That was the highlight of my career to be asked to work with the First Family on such a great cause. It wasn’t political because…

At the age of 94, Nancy Reagan passed away from congestive heart failure. Her funeral included a sweeping guest list of remarkable figures. But Mr. T stands out both for their surprising friendship and the profound gratitude and respect he had for his late friend.

“I am not a Republican nor am I a Democrat,” he tweeted while reflecting on their work with Just Say No. “But I am just a Christian Brother from the Hood trying to do some good! I will truly miss First Lady Nancy Reagan.” He concluded his solemn remembrance, “I will continue her work in trying to keep kids from the Dangers of Drugs. GOD Bless You First Lady.”