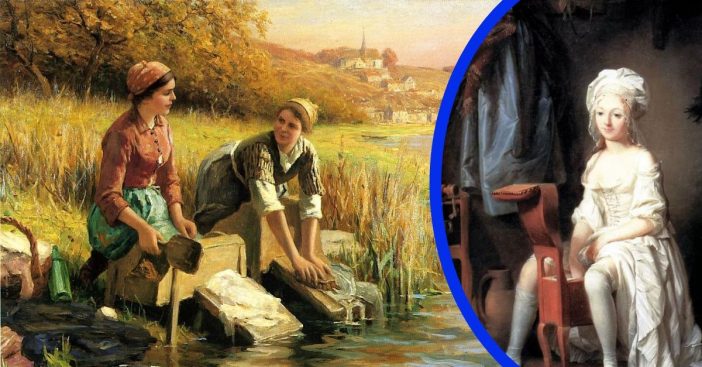 Values and practices vary from place to place. Sometimes there are even more divides within one area based on geography and social status. Time periods also tell us a lot about how cultures have changed, as we compare standards today from those of years ago. A modern-day American would find practices from centuries ago – say, during the time of the French Revolution – to be quite different from now. After taming worries of beheadings, gunfire, and spontaneous musical numbers, hygiene, in particular, offers some stark differences between then and now.

Based on social status, a person might have not only different values but also different access to tools to take care of themselves. This can ultimately explain the way certain people lived centuries ago when everyday practices today felt like luxuries back then. Sometimes, accessibility wasn’t the only problem, though. On some occasions, even when something was accessible, the quality will show its influence, ultimately making an activity hazardous. Like many other practices tied to social status, they became tools of expression. Here is how hygiene evolved in the years of the French revolution.

Bathing was desirable but not always considered safe

Rumors relentlessly hound royal families no matter where they’re from. People develop misconceptions over time and solidify incorrect facts about rivalries and mutual disdain. Sometimes a misconception becomes so popular, it overrides the truth completely. People think of hygiene during the French Revolution as a rarity, shunned by commoners and royalty alike.

RELATED: 5 French Things That Are Not Actually From France After All

The truth is, though, that many members of France’s nobility did appreciate cleanliness. In fact, France’s most austere nobleman pursued it quite a bit; King Louis XIV quite enjoyed his Turkish bath at Versailles. His people, however, did not get to enjoy this cleansing practice. After all, most people do not have access to safe, clean water that doesn’t leave them as dirty as they were to start with. People actually felt wary of bathing altogether, believing it to be unhealthy. Sure, they had a film of unhygienic dirt on them, but that was considered a protective layer. Better to fight the enemy you know than the one you don’t, right?

At first, when people did bathe, they did so sparingly, washing their hands, face, and lower half to preserve that protective layer around the rest of them. Gradually, word from abroad made its way to France that bathing actually could be quite beneficial. Scottish native William Buchan published the 1769 book Domestic Medicine, which emphasized the importance of baths. Eventually, France caught on, though among those who did, only the rich could act on this information. Without running water yet, the labor required to bathe could be downright exhausting.

Eventually, however, proper hygiene was deemed a human right just in time for the French Revolution – one of them, anyway. The National Convention’s Committee on Salubrity declared as much in 1793. As you can imagine, combined with other grievances centered on living conditions, this actually became an overlooked but important driving force behind the revolution.

Unhealthy, protective, or otherwise – not bathing still had consequences

Some even today argue in favor of embracing the day’s bacteria as a familiar and protective barrier from worse pathogens. But no matter the validity to this, not bathing had the same consequences that as it does now: the susceptibility to stinkiness and lice. When they could not always get consistent hygiene, even through elevated social statuses, many Frenchmen turned to perfumes with some truly shocking ingredients. Even some fountains contained perfumes splashing about in their basins.

But perfume did not make them any less accommodating to the lice. Whether it’s their real hair or elaborate wigs, lice becomes as present as any other family member in a French household. Except usually family members don’t contribute to exponential outbreaks of deadly diseases, including typhus. Initially, those who could afford them turned to wigs, after shaving their heads, to avoid lice. But still, the pests flocked to the artificial hair. Ingredients applied to wigs to try and fight them off ended up encouraging them to stay. Poor hygiene ended up creating a cyclical and deadly problem even for those with wealth.

Because of the persistent diseases and lack of sanitation, many French citizens ended up in hospitals. They carried their uncleanliness with them, making those places of healing into dangerous hotbeds of bacteria. Today, we associate hospitals with strict procedures to keep everything clean and safe for patients, at the same time aware of how it is still possible to get very sick there. Imagine not having any of those guidelines and safeguards.

And while people of every walk of life found themselves in hospitals, the palaces still found ways of being unclean too. This didn’t just come from the people, though, no matter how many lice hitched a ride on their wigs. Construction kicked up a lot of dirt, dust, and debris. All of that accumulated in the air, swirled onto surfaces, lingered over builders. Unfortunately, with all that work, the roughly 700 rooms had only nine with any restroom analogs. Adding in the thousands of people traipsing the halls, the bathroom situation got pretty… creative. And when they did use a chamber pot instead of a secluded alcove, those basins were dumped unceremoniously out whatever window was nearby.

Today we can easily look back with shock at how little our distant ancestors had or understood with regards to technology and biology. Of course it’s important to wash your hands before a meal! Naturally, you need proper toiletries and medicine to take care of those private areas! We can easily list science-backed cures and grandmother’s tried-and-true tricks to staying healthy. Unfortunately for our ancestors, their methods were not so elegant and streamlined.

Today’s women have a variety of differently-sized hygienic items for their monthly and a wide selection of clean healthcare facilities to check for infections. Around the time of the French Revolution, this hygiene was not so easy to obtain or understand. Members of the court spoke about menstrual cycles primarily in terms of when their queen might finally produce for them an heir. Otherwise, the subject is under wraps. Meanwhile, those who contracted syphilis had not just the disease to worry about, but the treatment as well. For a while, the primary approach was to use mercury. They either consumed it, inhaled fumes, had it rubbed on, or else inserted into the affected area. If, after all this volatile treatment, you wanted to gussy yourself up, you and your partner might use makeup… made with lead. This wore away at tooth enamel, swelled the eyelids, provoked hair loss, and could even risk the person’s very life. In fact, dental hygiene overall was considered so awful, people found it insulting if you smiled and showed your teeth. Being an Instagram makeup artist would be a very dangerous profession if we used those standards today!

Not all hope was lost, however!

Though washing machines were by no means wide-spread after their invention in the 1780s, people still took care of their clothes when they could. Though still teeming with bacteria and microorganisms, rivers at least provided an abundant source of deep, moving water.

Additionally, people could also turn to soap. Soap at the time, because of its ingredients and methods of formation, was sometimes too rough to use on the skin often. But it did the job well when used on clothing. Today, even after a long day without showering, we can appreciate how powerful a set of clean clothes can be in the meantime.