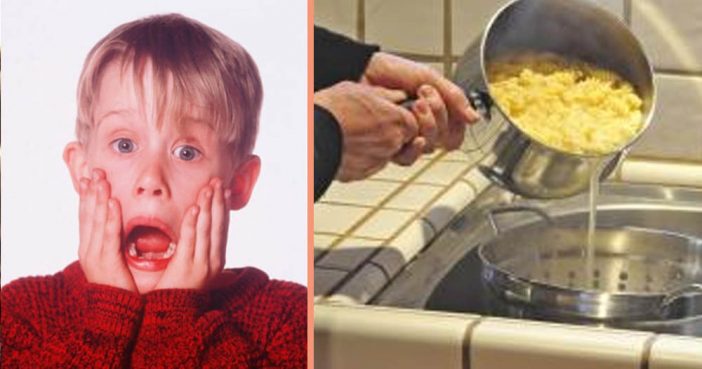 Cooking perfect pasta is an art, and everyone seems to have their own way of doing it. Some people like to salt their water, others drop in a little olive oil, while others leave the pasta water as plain as possible.

There is one thing almost everyone agrees on, though: the best way to drain pasta. Most people put a strainer in the sink and dump the pasta into it. Even if you use the pot lid do strain your pasta, chances are you still pour it into the sink.

So what I’m about to tell you might shock you: you should never drain your pasta in the sink.

No, it’s not because it’s unhealthy or dirty or anything like that. The reason you shouldn’t drain your pasta in the sink is because you should actually save that water!

Why? Because it can make your pasta sauces so much better.

I know, it seems like adding water to pasta sauce would just thin it out, but it actually does the opposite. Since pasta is made of flour, it releases starch into the water as it cooks. That’s why the water can look cloudy before you strain it out.

The starchy water can help thicken a sauce, and it can function as an emulsifying agent. According to the Huffington Post, “Emulsification is the process of blending two liquids that would otherwise repel each other ― in the case of pasta, it’s oil and water ― into a smooth, inseparable mixture.”

Obviously, you don’t want to dump all the pasta water into your tasty sauce, but you should save a little bit of it! As you’re making your sauce, you should spoon in some of the water. It can work for any sauce: tomato, pesto, wine, or even Alfredo.

If your pasta is made out of something other than flour — like potato, corn, rice, or lentils — it still releases a similar starch when cooking, so it works the same way.

Now that you know the best way to make pasta sauce, you can have a tastier and more fulfilling meal. And here’s another cooking tip: never rinse your pasta after draining it. The starch that clings to the pasta helps sauce stick to noodles.

Are you going to try out this pasta trick? Don’t forget to share this clever hack with your friends!