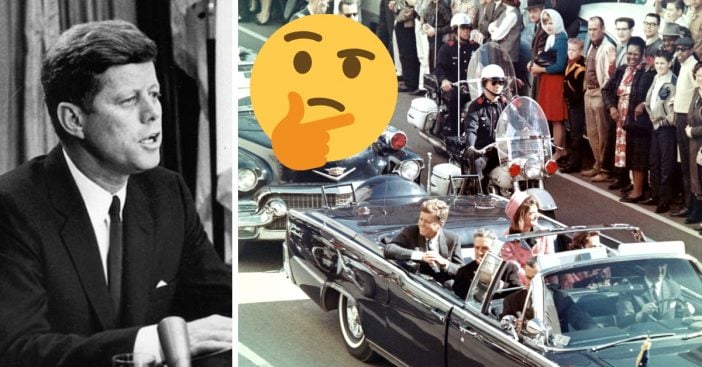 The assassination of the 35th President of the United States, John Fitzgerald Kennedy, still ranks as one of the most memorable and hard-hitting presidential assassinations to take place in U.S. history. The JFK assassination occurred on November 22, 1963 and to this day there remain so many questions with no answers. As recently as October 2021, the White House announced the delayed release of secret JFK assassination records, allegedly due to COVID-19, so we are still awaiting answers so many years later.

An 888-page report from the Warren Commission in 1964 concluded that Lee Harvey Oswald acted alone, which is pretty much the only thing about the assassination that stands undisputed. There is so much that has been left unsaid, untold, and remains a mystery ever since. Here are some unanswered questions from JFK’s assassination we still all wonder about today.

On November 22, 1963, JFK and his wife, former first lady Jackie, rode through downtown Dallas in an open convertible when gunshots fired at around 12:30 PM. The president was hit in the neck and head and died soon after. But what else happened?

RELATED: An Abandoned JFK Terminal From The 1960s Is Being Transformed Into A Hotel

The Warren Commission’s report finds no evidence that Lee Harvey Oswald was part of any conspiracy to assassinate the president. They concluded that all gunshots were by Oswald himself and he was working alone. However, Oswald was murdered by nightclub owner Jack Ruby before he could be of use to provide insight. What else could have been said?

3. Everyone was questioning the truth

There was a year-long investigation that went into the JFK assassination, and even then people were still questioning what the truth was. Despite the Warren Commission’s report concluding that it was an act committed by one man, the American public feels that something is just off. Subsequent investigations cast doubt on this report, raising additional questions regarding what information has been disclosed and what has not.

4. The Warren Commission’s report vs. the entire investigation record

The 888-page report of the Warren Commission is actually very short of what the actual investigation record was, despite reaching a whopping 5 million pages. It’s now known as The John F. Kennedy Assassination Records Collection maintained by the National Archives. A 1992 law requires that any and all assassination records release to the public, but America is still waiting for full disclosure.

Americans don’t settle for lack of transparency. A law requires assassination records for public release, and some information has been, but not all. There’s no guarantee when the rest will be made public. Why is this information being withheld? What else is there? Why?

What makes things even weirder is that despite attempts to keep the assassination information closed away, recently declassified documents point to a real-life conspiracy by CIA offers to hide evidence from the Warren Commission. If there’s a chance that the Warren Commission didn’t have all the vital information, what else are we missing? What do they not want us to know?

The House Select Committee on Assassinations (HSCA) came together to investigate the assassinations of JFK and Martin Luther King, Jr. They even concluded that JFK’s assassination was the result of a conspiracy. The report was never successfully refuted and is allegedly no more credible than the Warren Commission’s report. This clearly still raises the question of a possible conspiracy that has not been fully disclosed to the public.

Now, with all of this information, there’s clearly a high probability of conspiracy that, for whatever reason, is being kept out of the public view. One of the reasons the HSCA’s report failed to present a clear argument was due to the fact it didn’t include a logical explanation for the events. There was absolutely no evidence to suggest who may have been behind the conspiracy, which is where the situation becomes even more confusing. It’s a game of ‘who done it’?

There are other theories out there besides the “conspiracy” and “more than one man” ideas. One of the theories that the HSCA actually refuted was that the Cuban government was somehow involved. Another strange fact? The HSCA does not get to review this theory, meaning they never receive the option to open an investigation towards any promising leads. Again, more information being withheld, not only from the public but also from actual government officials.

Many conspiracy theories are “too crazy” or “not plausible”, but this is what happens when information is withheld from the public. Toni Glover, Ph.D., an associate professor at the University of Scranton, is just 11 years old when she witnesses JFK’s assassination. She claims she saw a second shooter, not Oswald, on the side of the road. This was the shot that ended up taking JFK’s life. This still stands as yet another theory.

11. The “bullet from behind” theory

Former Washington Post reporter Jefferson Morley has written several books on the assassination and avoids the term ‘conspiracy theory’. Despite this, Morley still doubts that the fatal shot came from Oswald, mainly due to JFK’s head flying backward when he was shot. Morley feels it makes a lot more sense for the fatal shot to come from in front of JFK, rather than behind, in this case. Despite this idea, reports have claimed that a shot from behind can cause the head to fly backward. So, it’s not a case of which way the bullet came from. The 1991 Oliver Stone JFK offers up its own theories about the so-called “magic bullet” that had an adventure all its own.

Reporter Jefferson Morley also pointed out that a paraffin test (an early test using hot paraffin wax to take a cast of a suspect’s hand) on Oswald suggested he did not have a rifle on him. Despite this, the test’s reliability has been questioned since and there has yet to be a final ruling on what is true or false. This, again, raises the question about if Oswald was even part of the scheme to kill the president.

This is definitely one of the most common theories among pretty much any type of murder, whether it’s an assassination or a mass killing spree, “The government did it.” Many believe that the government is hiding so much information from us, because it was actually an inside job and they have been trying to hide it for decades. CIA leaders were apparently pretty frustrated with JFK over the Bay of Pigs Invasion, so could that have pushed them over the edge to get rid of JFK once and for all?

RELATED: The House Where JFK And Jackie Kennedy Honeymooned Is On Sale For $135 Million

Previous article: ‘Elf’ And ‘National Lampoon’s Christmas Vacation’ Are Getting All-Day Marathons
Next Post: The Rain Bonnet Is Making A Fashionable Comeback From A Surprising Source