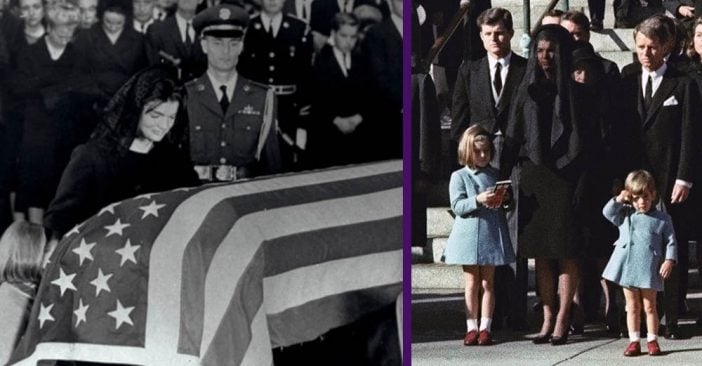 What is known as one of the most important days in American history is also remembered as one of the saddest days as well. Clint Hill states that there must’ve not been one dry eye in the entire area of JFK’s funeral in 1963. Part of that emotion was evoked by JFK Jr. He was 3 years old at the time, saluting his father’s casket.

When all the military presidents saluted as JFK’s casket was brought out, JFK Jr. followed suit. Clint Hill reveals that prior to the toddler’s salute, Jackie Kennedy had leaned down and whispered something to the toddler of which is unknown to this day, but it may have been a gentle nudge to salute his late father. The photo is absolutely tear-jerking yet beautiful.

John F. Kennedy was assassinated on November 22nd, 1963 in Dallas, TX. He was fatally shot by former U.S. Marine Lee Harvey Oswald. Clint Hill, who is previously mentioned, was a secret service agent who has worked under five presidents, including John F. Kennedy. He was present for the assassination of the 35th president and is known for his act of heroism and bravery during the incident in an attempt to keep the president safe from any more additional injuries.

JFK was pronounced dead in the emergency room and his funeral took place just three days after the assassination. It has been several decades since the death of JFK and a number of conspiracy theories have been processed over the years insinuating that Oswald may have not acted alone. Former Los Angeles District Attorney Vincent Bugliosi revealed that a total of 42 groups, 82 assassins, and 214 people have been accused of JFK’s assassination (in theory).

The tragic loss of JFK Jr.

John F. Kennedy Jr. was born on November 25th, 1960, making his 3rd birthday the same day as his father’s funeral. JFK Jr. was well known for his work in politics, following in his father’s footsteps as they both identified as members of the Democratic party. However, JFK Jr.’s time on Earth was unfortunately short-lived.

He was on his way with his wife Carolyn and sister-in-law Lauren Bessette to attend his cousin’s wedding at Martha’s Vineyard, MA. They were traveling by way of a light aircraft. However, the plane was reported missing after they failed to arrive on schedule. All three bodies were discovered on the ocean floor a few days later by Navy divers. JFK Jr. was 38.

It is no secret that the Kennedy family has dealt with loss and grief most of their lives, at least what it still left of their family. There are so many moments in time that only simple photos can remind us of and JFK Jr. saluting his father’s casket will always be one of them.

Don’t forget to watch the full news coverage of Clint Hill’s interview below, talking about the historic toddler salute.

Previous article: Psychologists Warn That Listening To Christmas Music Too Soon Is Bad For Your Health
Next Post: FAO Schwarz is Back And Has An Official Opening Date