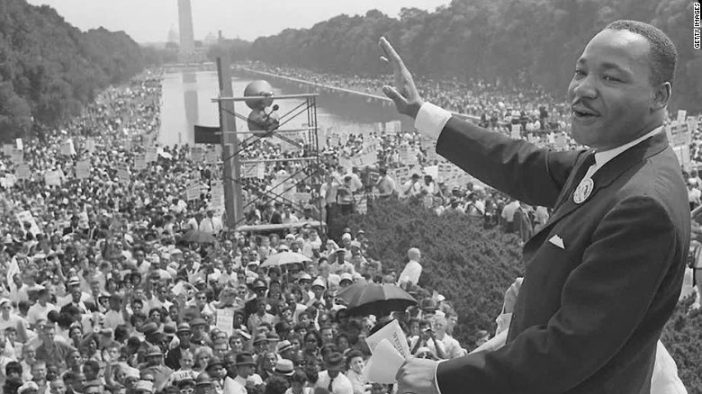 A minister, father, civil rights leader, humanitarian and husband—Martin Luther King, Jr., assumed myriad roles throughout his brief, prolific lifetime. Though he was born Michael King on January 15th, 1929, his father changed his name in honor of German reformer Martin Luther, setting the tone for his son’s remarkable career. Skeptical about Christianity growing up (and renouncing Jesus during Sunday school), he nevertheless decided to enter the seminary. Dr. King graduated from Morehouse College, obtained his bachelor of divinity from Crozer Theological Seminary in Chester, Pennsylvania, received his Ph.D. in theology at Boston University, and became pastor of the Dexter Avenue Baptist Church in Montgomery, Alabama, near wife Coretta Scott’s hometown of Heiberger—all by the age of 26.

Dr. King’s Christian beliefs propelled his activism, and he became involved in the civil rights movement very early in his career as a minister. In 1955, he led the Montgomery Bus Boycott, a peaceful protest against ongoing racial discrimination on the part of the city’s public transportation system. It was the same year that Rosa Parks was arrested for refusing to give up her seat on a bus. The boycott continued for 385 days, becoming so fraught with tension that Dr. King’s home was bombed. His arrest during the protest set in motion legislation that ended racial segregation on all Montgomery public buses As the founding member and leader of the Southern Christian Leadership Conference (SCLC), Dr. King sought to harness the organizing power of black churches to embark on peaceful civil rights reform.

From the group’s creation in 1957 until his death in 1968, Dr. King led the SCLC in intense activism: a non-violent attack on segregation occurring in Albany, a campaign against social injustice in Birmingham, demonstrations in St. Augustine, and a partnership with the Student Nonviolent Coordinating Committee (SNCC) in Selma, Alabama. Among his loftiest endeavors with the SCLC was 1963’s March on Washington.

WATCH HIS FULL SPEACH ON NEXT PAGE