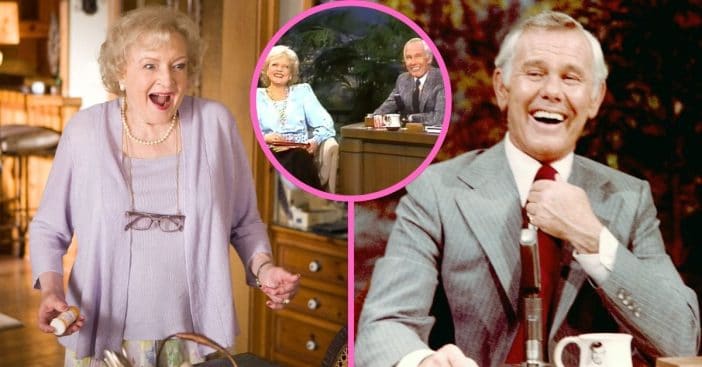 As host of The Tonight Show, Johnny Carson crossed paths with numerous memorable guests, but perhaps one of the most legendary meetings came when he spoke with Betty White, who passed away at the age of 99 on New Year’s Eve.

White of The Golden Girls fame appeared in an interview with Carson in the late ’80s. During their back-and-forth, viewers got a special look into a unique friendship between two titans in their field, especially considering the nature of their jokes with one another, which included flirting and some extreme comparisons.

The year was 1987 and things had changed dramatically in the lives of both Johnny Carson and Betty White. Carson had divorced his third wife in 1985 and was single for a brief stint until marrying his fourth wife in 1987. It is reported that this period as a bachelor was uncommon for Carson, who had been married to someone since the ’40s and each year a divorce occurred so too did a new wedding. White, meanwhile, had lost her second husband, Allen Ludden, in 1981; the two tied the knot in 1963, and White famously never remarried.

RELATED: Betty White Honored By US Army For Her WWII Volunteer Efforts

When she appeared on The Tonight Show for an interview, she and Carson fell onto the topic of relationships. Carson noted, “I’ve known you a number of years, but I’m [not] sure I really know you.” He went on to say that White gave off a wholesome persona but seemed to harbor something very different underneath. White fired back, “If you hadn’t gotten in such a rush to get married we could have arranged something.” The crowd whistled appreciatively, prompting Carson to conclude, “You’re somewhere between Mother Theresa and a call girl. And I’m not quite sure where it is.”

The kind of friendship that defines television

Johnny Carson and Betty White shared more than a powerful presence in their respective fields; they also shared a famously strong friendship nurtured in the early days of their careers. Both found themselves populating game shows throughout the 1950s and ’60s and there their paths crossed – repeatedly. They can both be seen, much younger, next to one another on To Tell the Truth. When the trajectory of Carson’s career saw him become the host of The Tonight Show, he still got to see his colleague as White became a frequent guest.

“We grew up together,” White said during that banter session between herself and Carson about relationships. It might not have been a literal shared upbringing, but the formative days of their careers saw the rising stars working together frequently. Similarly, when White was on The Mary Tyler Moore Show, Carson also made an appearance, though in voice alone. This friendship remained in place until Carson’s death in 2005 followed by White’s own recent passing, both leaving behind vastly impactful legacies still enjoyed today.