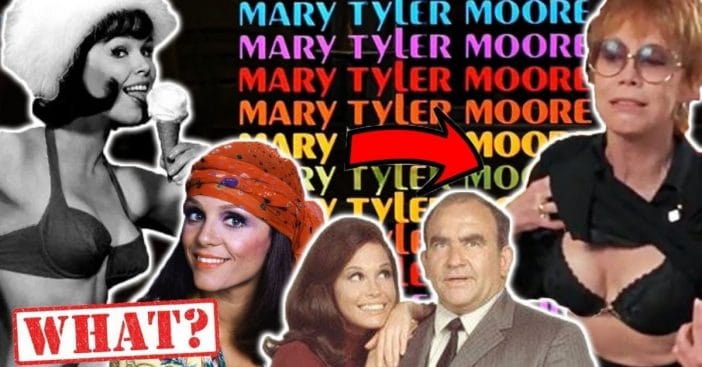 Mary Tyler Moore once said, quote, “I’m not an actress who can create a character. I play me.” Well, I’d watch ‘Her’ any day. From her start on The Dick Van Dyke Show to her rise to fame and lasting effects on the entertainment world, Moore was a force to be reckoned with. But for all the years of watching Mary Tyler Moore apparently play herself, there was much we didn’t know.

Did you know her legs were famous before she was? Or the heartbreak she suffered from private tragedies? Let’s learn a little more about a true Hollywood star.

A Leg Up on the Competition

Before she became famous on Dick Van Dyke — Moore’s career began as “Happy Hotpoint”, a tiny elf dancing on Hotpoint appliances for ads during the 1950s series Ozzie and Harriet. Her narrative debut came in 1959 when she played the mysterious & glamorous secretary for six episodes in the series Richard Diamond, Private Detective.

But if you don’t remember her face from the show, that’s because they cleverly shot only her legs for one episode, and then cut out her face in another – to keep the mystery going. Another gig was the total opposite. MTM was a reliable model for record covers, remember when she graced the cover of the Cha Cha Cha LP? OLAY!

When Moore tried out for a role on The Danny Thomas Show, she didn’t get it. But she made her mark and luckily had a memorable name, too. Danny Thomas couldn’t forget the woman with three names, and he called her just that when he recommended her to Dick Van Dyke for the mother part of his new sitcom. So the lesson is, be adorable, talented, and have a name that matches.

Jump back in time with me. It’s the early ‘60s, It was a different America back then with some very old school norms still in place, including women expected to wear dresses for school, at work, even while at home.

And so, early visions of Laura Petrie had her as a traditional mom modeled after June Cleaver from Leave it to Beaver, dress and all. But that’s where Moore put her foot down. Her pants-wearing leg, foot and all. With the country in the midst of social change, Moore demanded her character be allowed to wear pants, arguing THAT was a truer picture of an American housewife. She based her vision on real friends of hers and In the end, she got her way. A current glimpse of the American housewife.

Few outfits are as memorable as that green dress, you know the one, from season five’s “You Try to Be a Nice Guy.” It was kind of a huge deal, those holes showed WAY more skin than anyone had ever seen on primetime TV, and on the exquisite Mary Tyler Moore. More than a few people probably reacted like Ted. The dress was thanks to prostitute Sherry, played by Barbara Colby, who we first met in “Will Mary Richards Go To Jail?” She was such a hit, they brought her back as a good citizen just trying to obey her parole. Her new passion project was fashion design, and so the green monstrosity was born.

But this amazing actress actually met a horrible end. Colby had just gotten a new co-starring role in the Phyllis spinoff and filmed three episodes. Then, on July 24, 1975, she and a friend were leaving an acting class in Venice, California, when a van pulled up and shot the pair without warning. Colby died at the scene and her friend lived long enough to describe the attackers before dying as well. But sadly, the case was never solved. We can only hope that changes someday…

The original vision of Mary Richards was pretty different. Of course, we remember Mary as the strong, independent woman who read the writing on the wall and made her own choice to change her life’s course. But originally, they pictured a 30-year-old divorcee who moved out because her husband left her.

That’s when CBS network researchers swooped in and shut that down. They said viewers wouldn’t invite divorced women, people of a different faith, New Yorkers, or guys with mustaches into their living rooms. Tough crowd.

It can’t be stated enough: Mary Tyler Moore made history. She’s the woman behind a show that broke records and shattered the glass ceiling. Mary Richards gave viewers their first glimpse of a televised, successful and independent woman.

The show won 29 Emmy Awards. 29. And the leading lady? MTM won 3 Lead Actress Emmys, an Actress of the Year honor, as well as being nominated the other years she didn’t win. And Candice Bergen who also took home her share of trophies said there would be no “Murphy Brown” without The Mary Tyler Moore Show.

Win some, lose some

If there’s one thing Moore’s career should teach us, it’s to keep getting back up on the horse. After she and husband Grant Tinker started MTM Enterprises, Moore wanted to try her hand at more shows of her own. And…they flopped. The show Mary lasted all of three episodes, Moore saying afterwards she asked CBS to pull the program as she was unhappy with the direction of the show – Then The Mary Tyler Moore Hour made it to 11 episodes before its untimely end. But then Moore took Broadway and the big screen by storm in 1980 and netted herself a special

Tony Award for Whose Life Is It Anyway?, and a sought-after Academy Award nomination with a role that really hit close to home, playing an emotionally distant mother in Robert Redford’s Ordinary People. It’s a beautiful yet heartbreaking tale if you’ve not seen it. And yes, the MTM logo cat has a name: meet Mimsie the shelter kitten, a deliberate reference to MGM’s lion mascot. Small company, small logo, small cat.

Mary Tyler Moore loved the joy she brought others. In fact, she said it was her greatest blessing, that humor was her job, a job she loved. But for all the laughter, she suffered some major heartbreak.

Moore’s sister Elizabeth died when she was just 21 from a mix of painkillers and alcohol. Things with her brother took an equally dark turn. John Moore was seven years younger and battled kidney cancer. So, he asked Mary to help him commit suicide with ice cream laced with drugs. The attempt failed and he ultimately died three months later of kidney cancer at just 47 years old.

The King and I

The hound dog Elvis himself has had a lot of ladies vying for his heart on the big screen. Of course, there’s the famous affair between him and Ann-Margret, and who could forget Linda Thomspon. And the final love interest on his list of films, Mary Tyler Moore from Change of Habit, where her character, a nun, has to basically choose between Elvis and God. And whew, that’s a tough one.

Moore ended up there when she enjoyed unexpected success with Thoroughly Modern Millie. Moore felt a bit out of place in an Elvis Presley flick, but it worked out for both of them because they were actually huge fans of each other’s work- maybe even more on Elvis’ side as he apparently had a crush on Mary, if we go by Moore’s autobiography. I’ll believe it.

Very first at the very last

The year is 1977 and the Fonz is speeding up to jump the shark, but go back a few months and- what’s this? A show ending on a high note and leaving it at that? She and then-husband Grant Tinker weighed their options and wanted to conclude The Mary Tyler Moore Show while it was still loved and hadn’t overstayed its welcome, hence a finale unlike any other in March 1977.

And at the end, Moore did some firsts for sitcoms. Her show was one of the earliest to give the characters themselves a chance to say goodbye to each other, with an in-show reason. And then Mary’s program made more history by being the first to have a curtain call. Before the final credits rolled, Moore announced her colleagues so they could all take a final bow. Certainly, one of the best trends to start on TV.

Moore seemed like an unstoppable powerhouse, and that makes her private battles even more remarkable. Behind the scenes, alcohol shaped a lot of her pain at nearly every stage of her life. In the mirror, Moore saw a slightly uneven face that she always wrote off as being the child of an alcoholic mother. She begged her mom to stop and she refused. And her father never showed emotions like love or affection in a way that a daughter craves. So then Moore turned to the stuff, too. Then, when she was flying high in Hollywood, she became what she hated about her youth: becoming an absentee mom.

At the age of 33, she suffered the grief of a miscarriage, but that day’s shock wasn’t over. Normal blood sugar levels are 80 to 120. Hers that day was 750; Moore had Type 1 diabetes. But she kept drinking and kept drifting from her son, Robert, and like his mother and his grandmother before her, he too became an addict. Until one day in 1980, she received a phone call saying he’d accidentally shot himself and died. The gun model was later taken off the market because of its “hair trigger.” Then, finally, she started slowly picking herself back up, feeling ashamed, but also inspired. It helped that First Lady Betty Ford started a clinic that took away some stigma of being a young socialite as well as an addict- back then, the two just weren’t compatible, and Moore had a lot of self-reflection to do. And she did it all in private so that she could be the woman who could light up a room in public.

Calling Mary Tyler Moore revolutionary wouldn’t be an overstatement. She filled all our living rooms with laughter and made the days easier, while her own was sometimes very dark. So, let’s toast to Mary… what tv show did you enjoy watching this incredible actress on? Did she deserve to win the Oscar for Ordinary People, that she lost out to Sissy Spacek as Loretta Lynn in Coal Miner’s Daughter? Let us know in the comments below.

Click for next Article
Previous article: This ‘I Love Lucy’ Photo Can’t Be Unseen, Plus Other Crazy ‘Lucy’ Facts
Next Post: 10 Vintage Sweets That Are No Longer For Sale