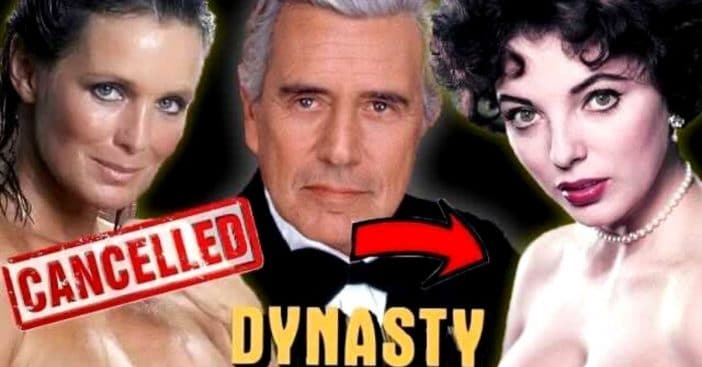 I’m not a gambling man, but I’m willing to bet a show like Dynasty has some shocking secrets to uncover. This drama really struck gold – or, I should say oil, black gold is the term – between giving even Dallas a run for its money, and literally shaping American fashion in the 1980s, Dynasty was a powerhouse program with lots of secrets to reveal.

Today, we’re sharing all the inside details about the famous and infamous. Without further ado, let’s seek our fortunes with Dynasty.

Dynasty pits the Carringtons against the Colbys in a turf-war, a scheming sabotage-fest for power and wealth and more power. And the title Dynasty is clear, with the families the rulers of their own dynasties, but the show nearly tapped even closer to its roots with the proposed title Oil. Jump back a decade before Dynasty, and America suffered a major oil crisis and energy shortage. Originally, Dynasty took place during that oil crisis and showed both low-level workers AND the wealthy oil magnate families. But after a bit of audience testing, producers learned that people didn’t want low-level stories, those were common to blue-collar America; People wanted a look behind the palace walls.

Producers also took inspiration from I, Claudius, a book-turned-series about the Roman emperor with the same name. Game of Thrones writer George R. R. Martin would be inspired by the very same for his brilliant betrayals, and I can definitely see the similarities with Dynasty. For example in Dynasty, they modeled Alexis directly after Livia. Finally, they made one final tweak by changing the family names from the Parkhursts and the Corbys to the Carringtons and the Colbys.

Famous TV Rivalries, enter Bewitched and Jeannie, The Munsters and Addams Family, well Dynasty hit a similar niche as its own rival Dallas. One of the ways it tried to stand out isn’t what you’d expect: Dynasty tried for an especially glamorous wardrobe, and to do that, the show recruited some creative minds in the fashion world. One was costume designer Travilla, famous for dressing Marilyn Monroe in that infamous potato sack to prove, yes, she looks great in everything.

As for the jewelry, designer Nolan Miller made those, whenever the show didn’t use gems from Tiffany’s. A lot of the jewelry Miller made… wasn’t real! He designed them himself to simply appear dazzling. Then, of course, there’s the revolutionary shoulder pads. Think back to ‘80s fashion, and you couldn’t go into any office without seeing them. That’s partly thanks to Dynasty. Miller took inspiration from Joan Crawford’s wardrobe back in the ‘40s. Oh, and he also personally designed 3,000 different outfits, so no character ever wore the same outfit twice. All that work required a wardrobe budget of a mere $35,000.

Case of the disappearing cast

During its nearly ten-year run, Dynasty went through some cast changes which is tough for fans who must watch their favorites move away, or worse, fall off a cliff. Well, we lost Lee Bergere as Joseph the majordomo because of a fight with producer Aaron Spelling. His crime was wanting more screen time for his character and better pay for himself. Also, Catherine Oxenberg’s Amanda Bedford, the secret daughter of Alexis and Blake, leaves after Catherine also had similar contract disputes.

Dynasty was pretty revolutionary for its time for having one of the first prominent gay characters in the cast, played by Al Corley. But when they misstepped with a “cure” storyline, Corley quit out of protest. This departure reshaped the plot, now having Steve Carrington get into the accident which required plastic surgery, so new-Steve aka Jack Coleman’s different appearance would slide.

There were some big-name guest stars on Dynasty, too. We got to see Rock Hudson in Season 5, as the horsemaster and almost-lover of Krystle, but his Daniel Reece would sadly be Hudson’s last role. When Dynasty was filming, the AIDS epidemic was in full swing, and still not fully understood. None of the Dynasty crew knew Hudson had AIDS, and Linda Evans was confused when they never shared passionate kisses. Sadly, Hudson’s health deteriorated, forcing the off-screen death of his character, as Hudson himself passed away and his secret was revealed.

Back then many people thought AIDS was transferred through saliva, so many fans worried for Evans’ health. As a direct result of this fallout, the Screen Actors Guild instilled a rule requiring performers to get notice before any open-mouth kissing scenes, and recommended against kisses between at-risk groups.

If there’s one thing fans love between characters, it’s tension, especially romantic tension. Believe it or not, producers entertained the idea of having Blake and his ex-wife Alexis get back together… while Blake was still with Krystle! Not sure how that would have gone down, but John Forsythe was sure he wanted nothing to do with it. He didn’t want to even act like his character would cheat. In fact, Forsythe frequently put his foot down on plots he didn’t approve of.

He refused to have his or his characters morals shaken, just to save a show’s declining ratings. As Dynasty started dying, they wanted a plotline where Blake gets amnesia and again falls in love with Alexis. That was vetoed, too.

Keeping the actors in suspense

Being a series regular doesn’t always equal job security, and Dynasty had no problem offing some of its cast. And if Game of Thrones reminded you of Dynasty, the similarities run deeper than you may realize. While Game of Thrones shocked the world with the Red Wedding episode… Dynasty had the Moldavian Massacre, where terrorists sprayed bullets into the crowd at Amanda and Prince Michael’s wedding. Heck, they even had military planes lighting the place up. It was one of the cliffhangers of the decade for viewers! But… not JUST for viewers.

Even the cast had no idea who survived. The closest hint was how much blood the makeup team put on you. SO, if you were really bloody, you called their agents to start the job hunt again. The event gave the famous Dallas “Who Shot JR” cliffhanger competition, and people everywhere started wearing shirts that read “I survived the Moldavian Massacre.”

Keep it secret, keep it safe

Dynasty prided itself on intrigue and cliffhangers. In a surprise twist, Dynasty shocked viewers when Dominique says she’s a Carrington. Then, right on cue, the season ends and everyone has to wait for the fallout. But Dynasty wrote out and filmed several different plot twists for the finale, so not even the cast knew which was the actual ending. In one ending Dominique says she’s Cecil Colby’s ex-wife, and in another ending, she says she’s Kirby Anders’ mother. Pretty genius way of keeping literally everyone on their stiletto toes.

Of course, anything with parent-child dynamics gets pretty surprising when you realize Joan Collins and Gordon Thomson, who were supposed to be mother and son, were just 11 years apart in age.

The set designers went to unbelievable lengths to make the whole place feel real; they didn’t leave one corner ignored.

That meant producers used real fresh flowers for all those fancy mansion displays. But authenticity costs, and when the show reached peak popularity, it cost up to $25,000 per episode just for those flowers. When they realized this was just plain unsustainable, the producers cut back and finally switched to silk flowers, just one casualty of the budget cuts in later seasons.

Dynasty is also famous for its rivalries. Who can forget the hate Krystle and Alexis would throw at each other? All that escalated into a gown-wearing catfight in a lily pond. A real brawl for the ages. It looks easily like they could push each other deep under the water and never surface, but they filmed in shallow water at a Pasadena manor. Joan Collins and Linda Evans were on their knees duking it out in water that was only 2 and a half feet deep.

They had a hard time making it look real, and when the director set them free, everyone laughed and clapped. The shot took all day, but Evans wasn’t complaining because the brawls were her favorite, while Collins loved the arguments. If you’re going to fight, might as well have fun with it!

By audience demand, Dynasty made heroes out of the greedy and had people rooting for their favorite cut-throats among the elite. So, it’s almost too fitting that, in a move, Blake Carrington himself would have loved, the show capitalized on a LOT of merchandise. Dynasty had its own beauty and clothing line. Fans could get $3 pantyhose, Forever Krystle perfume selling for 150 bucks, or collectors’ dolls of Alexis and Krystle for the low price of $10,000 smackaroos. Super dedicated fans could even get a $200,000 coat in style with all the Carrington’s flashy getups. And people DID buy this stuff. Selling over $400 million dollars worth of merch.

Even though Dynasty took place in Denver, they shot some parts in San Francisco’s Filoli Estate. The mansion is 36-thousand square feet with 43 rooms, 17 bathrooms, and 17 fireplaces. Only 17? Residents can visit the property. For everyone else, they need to wait for special events, like when the former Dynasty house hosted the Filoli Flower Show. Instead of deep oil veins, the house had 50,000 tulips and 15,000 daffodils.

If you can’t make it there, you can also see the gorgeous estate in the 1978 film Heaven Can Wait.

A lot of plotting went into digging up all these fun tidbits, but it was worth it. So, what surprised you the most? Did anyone out there have some Dynasty Merch, a lunch box, or Alexis doll still hanging around anyone’s spare room? Let us know in the comments below, and let’s all share our favorite episodes or story arcs of this legendary prime-time drama!

Click for next Article
Previous article: ‘Days Of Our Lives’ Veterans May Be Returning To The Show
Next Post: Tensions Were High Between Chevy Chase And John Belushi On ‘SNL’