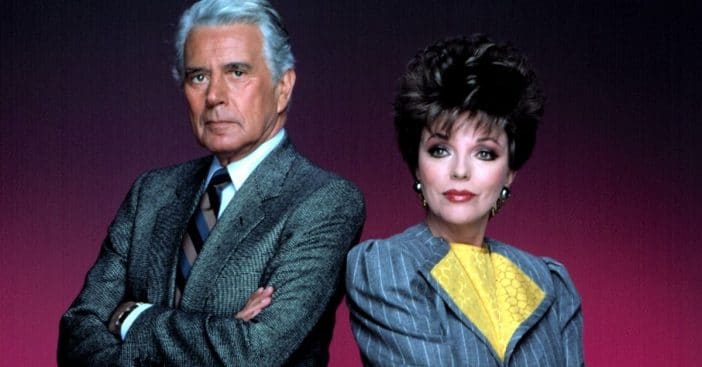 Dynasty famously followed the cutthroat and gritty drama between the Carrington and Colby families. Reportedly, tensions existed between the cast members playing these characters – even ones in the same family – as Joan Collins shares that she found co-star John Forsythe to be “misogynistic.”

In fact, she shared with Piers Morgan during one of his Life Stories on Sunday, Collins outright said “I didn’t like him.” Collins, 88, had a lot more to say on working with the voice of Charles Townsend from Charlie’s Angels.

Joan Collins claims John Forsythe was a misogynist – among other names

She further revealed, “He also had it in his contract that he always had to have $5,000 an episode more than anybody else in the cast.” This was not the first time a male star received significantly more than a female counterpart, and Collins felt, “They were so misogynistic they allowed this to happen.” She also called Forsythe himself a “misogynistic pr*ck.”

Reportedly, Collins had good advice to prepare herself for situations like this with Forsythe, from none other than Marilyn Monroe, who she says warned her, “Beware of the wolves in Hollywood, honey, because if they don’t get what they want, they will cancel your contract.” Indeed, when Collins rewatched some Dynasty herself during lockdown, she felt, “I was impressed by myself. Quite frankly, I think I should have got more [money].”