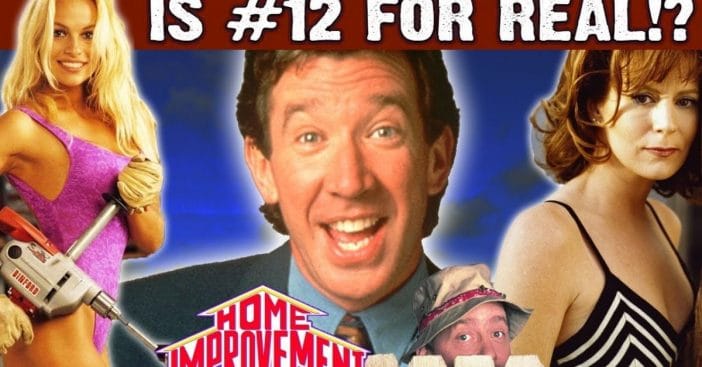 The hit sitcom, Home Improvement showed the world the glorious comedic styles of Tim Allen. The show aired on ABC from 1991 to 1999 with a total of 204 half-hour episodes spanning over eight seasons. In the ’90s, Home Improvement became one of the most-watched sitcoms in the United States, winning multiple awards.

While thousands of fans sat to watch the sitcom starring Tim Allen every week for 8 years, there is a lot that they may not know about the show. Let’s take a look into the deeper secrets behind the hit sitcom.

Home Improvement is a cheerful quirky sitcom with inspiration grounded in some surprising bits of reality. At 25-years-old, Tim Allen was arrested for selling cocaine to an undercover cop in his home state of Michigan. In the 8 months between his arrest and official sentencing, Allen performed standup comedy in the Detroit club, Comedy Castle. He kept up performing even after the fallout from his drug crimes, this time in Los Angeles. That’s where Walt Disney execs Michael Eisner and Jeffrey Katzenberg saw one of his sets and knew he was primed for a show. Where should the production location be? None other than Walt Disney Studios.

Jump to the actual show itself. Tim Taylor sometimes mentioned working as a salesman at Binford, a fictional tool company. Binford was the sponsor of the show within a show Tool Time and has its logo plastered everywhere. Turns out, Binford actually comes from the name of one of the writer’s old high school friends!

Any Toy Story fans out there? You can see another piece of Binford merchandise in the first movie as a toolbox that’s keeping Woody trapped underneath a crate. Of course, Toy Story also features the voice of none other than Tim Allen as Buzz Lightyear.

Additionally, the brand even lives on now in Tim Allen’s latest sitcom, Last Man Standing. His character works at a sporting goods store but that hasn’t stopped it from sporting the Binford brand all over! Who doesn’t love discovering hidden easter eggs!?

The Truth About Wilson

Wilson carries a lot of secrets with him, and not just his unseen mouth, which was one of the longest-running gags. For one thing, he’s based on a real person. When Tim Allen was young, he could never see over his fence, so as far as he could tell, his neighbor was just the upper half of a face. Because it was such a huge part of Wilson’s humor, actor Earl Hindman went to all sorts of lengths to stay hidden even when an episode ended. During curtain calls, he kept his face hidden with a little portable picket fence to hold over his chin.

For someone not a core part of the Taylor family, Wilson managed to become extremely popular. In fact, IMDb ranked all the unseen characters fans wanted to fully meet, and Wilson scored number 4! He’s in good company with Robin Masters from Magnum PI, Howard’s mother on The Big Bang Theory, and the Ugly Naked Guy from Friends.

Considering Wilson has a Ph.D. in forgotten languages and cultures, it’s no wonder he’s always able to dole out cherished wisdom for the Tool Man. And finally, fans could solve the biggest mystery of all when they got to see his full face during the series finale’s curtain call. The reveal was 204 episodes in the making.

Everyone knows Tim the Tool Man Taylor hosts Tool Time. Try saying that five times fast. It could have actually been easier if the producers kept their original plan for the show, naming it Hammer Time.

Of course, the song’s already stuck in your head. The title would have been a nice tribute to MC Hammer, but producers couldn’t touch the popular name and decided to change titles when the rapper’s popularity exploded, to avoid confusion. Then, they debated calling both the overall show and Tim Taylor’s program Tool Time. In the end, they went with Home Improvement to represent the main themes of the show, specifically Taylor’s house itself.

The whole setup for Tool Time was meant to be a loving parody of the PBS home-improvement show This Old House. This Old House ran for a mind-boggling 41 seasons, so it was definitely a good place to grab inspiration from.

The Cast That Never Was

Home Improvement nearly looked different. First, the original pilot was first shot with a different Jill. Producers originally shot a pilot starring Frances Fisher, better known for dramas like Unforgiven and Titanic. Yet, audiences didn’t quite feel the chemistry, so she bowed out, and in came Patricia Richardson just days before filming a second pilot.

Additionally, the man in plaid was nearly Stephen Tobolowsky, cast as Al the dry-humored Tool Time assistant. However, Tobolowsky wanted to keep his options open for his film career and family life, and a busy sitcom wouldn’t allow that. Good move too cause he booked Groundhog Day in ‘93 among many others. So how did Richard Karn nail the job? Well, he was on his way to Macbeth rehearsal when he ran through a stop sign. Except, it wasn’t actually bad luck for Karn because he met an agent at traffic school who told him about Home Improvement. Turned out, Karn actually knew a few people involved and secured an audition.

Another possibility for the role was John Bedford Lloyd, who was seriously considered for both Al and the wise Wilson. Producers actually cast him as Wilson, but Lloyd didn’t want his face kept hidden the entire show’s duration and dropped out just one day before filming the pilot. Producers scrambled and thankfully nabbed Earl Hindman.

Even the Tool Time girl went through some changes. Lisa was the original Tool Girl, ultimately played by Pamela Anderson. Ashley Judd was considered as well, but her agents persuaded her to try and get some film roles, being a newly recognized talent. She’d end up booking another sitcom that same year in Sisters. And when Anderson left the show for Baywatch, she was replaced with the longest-running Tool Time Hottie, Debbe Dunning as ‘Heidi Keppert.’

An Audience For The Ages

Giving It The College Try

Tim Allen was born in Colorado, but Michigan became his home after his family moved there when he was a teen. So, Tim Taylor only sported clothing from Michigan colleges. Whichever particular university’s gear he wore got free advertising. So, naturally, the colleges picked up on this trend and started to flat out send the studio free apparel for Tim. All of his outfits through 204 episodes, included those donated, were Michigan college ware.

Well, almost all. Jump to the 1996 episode “Al’s Video,” and the Tool Man is wearing a Wofford sweatshirt. Wofford is in Spartanburg, South Carolina. Costume supervisor Valerie Levin-Cooper later said, quote, “Someone is supposed to double-check and verify the school is in Michigan. Obviously, someone didn’t do their job. Wofford got lucky.”

Did you know in 1994, Nintendo released an action platformer called Home Improvement: Power Tool Pursuit!. Tim Taylor’s Binford power tool line has gone missing and it’s your job to get it back! The game features four worlds with four levels each, mostly made up of soundstages. The show landed among the top 10 in the Nielsen ratings. The game landed in the Top 5 of worst games based on TV shows.

Except for the game actively discouraged doing that. The game mechanics may have missed the mark, but they still had a great sense of humor. Whole pages of the manual are blocked out with a huge sign “Real Men Don’t Need Instructions!”

Home Improvement never had to jump the shark. It was still popular even after season 8 ended. They could have kept going and fans wouldn’t have complained. So why didn’t they? Money.

Patricia Richardson wasn’t making anywhere near Tim Allen’s salary. Producers offered the 9th season with Richardson’s proposed salary bumped up to $25 million, while Allen was then offered $50 million. Patricia declined and Tim would not do the show without her.

Home Improvement was hugely successful, but behind the scenes, there was some fallout. Jonathan Taylor Thomas, who played middle child Randy Taylor, started resenting being a teen heartthrob. So, he bowed out before the show ended. JTT said he was going to focus more on his education, and even though he did a few other acting gigs, he did make good on his scholarly promise. And recently he even reunited with Tim Allen for Last Man Standing, even though Allen wasn’t happy about his early departure, but he’d probably be even more upset with what his other TV son got up to.

Zachery Ty Bryan, who played the oldest son Brad, got into some serious trouble with the law. In 2020, Zachery was arrested for allegedly trying to strangle his girlfriend. Ultimately, he pled guilty to domestic violence and assault charges. Charges like that usually warrant three years and the completion of a batterers intervention program. Never the track you want to see anyone take.

I think we could add more power to this project, but I’m told the whole roof might pop off. So let’s just salute the tool man. What was a great episode of Home Improvement you remember? Did you have a favorite Tool Girl? What about a great Tim Injury?