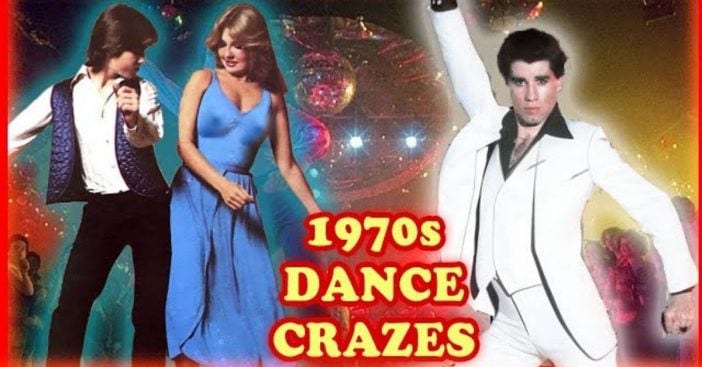 The 1970s were a crazy time. Pet rocks, polyester, shag carpeting, & Meat Loaf – the decade was certainly far out. But nothing in the ’70s was quite as out there as the dances! Waves of outrageous dance crazes took the nation by storm, making everyone think they were cut out to dance professionally.

Whether it was bumping hips, spelling words, or just flat out pointing, people from coast to coast couldn’t help but get down to these funky moves. Today we’re counting down some of the 1970’s weirdest and wackiest dance crazes!

If a worldwide organization focused on using Christian ideals to help at-risk youth seems like a bizarre basis for one of the 1970s most iconic dances, that’s because it is. Very bizarre. But this 1978 single Y.M.C.A. is just that. In the late 1970s, Y.M.C.A.’s had become one of the only places LGBT people could safely be themselves in New York City – so much so that gay icons The Village People wrote a loving ode to them. The song became a smash hit and inspired the famous dance where people form the letters Y M C A with their arms above their heads. But the band didn’t invent those sweet moves by themselves. During an appearance by The Village People on American Bandstand the audience mistook the band’s overhead claps for a “Y,” and started doing the familiar dance we all know. The band adopted the dance into their choreography, and the rest is history. The Y.M.C.A. remains popular to this day, even being performed by a record 41,000 people at halftime of the 2008 Sun Bowl. That’s a lot of letters!

What list of ’70s dances would be complete without the iconic Disco Finger? Also known as the “point move,” or sometimes just the “Travolta,” the dance is so easy anyone can do it. Just point your finger into the air in time to music, and voila! The origins of the Disco Finger are murky – it’s impossible to say who was the first person to point at things. But the move was made famous by John Travolta in the movie Saturday Night Fever – a pointer finger never looked so good! And as the easiest dance on this list to do, I’m sure it’ll be popular forever.

HI-YA (as big as possible)! With Hong Kong action flicks dominating the box office, a wave of kung-fu fever swept the nation in the mid-1970s. America was so obsessed that the single “Kung Fu Fighting,” which was recorded by Carl Douglas in a mere ten minutes as a “B” side, quickly shot to #1 on the charts in 1974. The song inspired dancers all over the country, and although it’s hard to believe, soon literally EVERYBODY was kung fu fighting their way across the club. The dance was really very easy to pick up: just watch any kung fu movie and do your best, or most likely worst, the impression of the fighters in time to the beat. With kicks as fast as lightning and expert timing, these dancers terrorized the clubs of the 1970s and were more than a little bit frightening.

Do the hustle! Do do do do do do do do….. The opening notes of Van McCoy and the Soul City Symphony’s single “The Hustle” immediately make you want to jump up and dance. McCoy was inspired to write his 1975 #1 hit after watching dancers perform some new moves at New York disco The Adam’s Apple. Invented by Puerto Rican teens in the South Bronx, The Hustle has similar steps to swing or salsa, except danced 50% faster! It can be done either as a line or a partner dance, and both versions were famously portrayed at the height of their grooviness in the movie Saturday Night Fever. The Hustle became so popular in America that it even got its own television show, Disco Step-by-Step, which featured dance instruction and hustlers trying to out-hustle each other. While the dance has faded in popularity, the song is one of the most popular one-hit wonders of all-time – and you better believe it made our 1970’s One-Hit Wonder Countdown!

“Everybody come out to the dance floor” because we have one of the 1970s most famous line dances – The Electric Slide. Choreographer Ric Silver set the dance to Bunny Wailer and Marcia Griffith’s 1976 single “Electric Boogie,” and people haven’t stopped dancing since. Ubiquitous at weddings, family reunions, and school dances, The Electric Slide is polarizing – you either love it or you hate it. The dance originally consisted of 22 steps, but today there are several different variations. But be careful which one you do – in 2008 Ric Silver began suing anyone posting an 18 step version on YouTube! Talk about touchy! The dance has never gone down in popularity, and due to the dance’s inclusion in many grade-school P.E. curriculums, I’m sure that people will be boogie-woogie woogieing for years to come.

Sometimes a parody is so good that people forget that it was ever satire – which is exactly the case with our next entry. Originally written for The Rocky Horror Picture Show, “The Time Warp” is a dance song mocking the dance crazes of the 1970s. Meant to be nonsensical and vaguely insane, the song is about a dance so catchy you are powerless to resist it. The song lays out its peculiar moves step by step, making fun of the rigid line dances so popular in the ’70s. But in an ironic twist, the song caught on, madness took its toll, and the dance is still performed at weddings and proms today. It must have been the pelvic thrusts driving everyone insane!

When is a dance not really a dance? When it’s basically an excuse to rub butts with someone. Which is really what The Bump is. The Bump has no set steps, it’s a “dance” done by two partners gently bumping their hips together in time to music. The move swept the country after The Commodores released their 1974 hit, “The Bump,” and soon people all over America were bouncing their booties together – oddly even including singer Tony Orlando and First Lady Betty Ford. A saucier version of the dance had the two partners bumping crotches rather than hips, which evolved over time into the modern erotic dance of “grinding.” And the dance has never gone away – MC Hammer exhorted us to “all do the bump” in his 1990 hit “U Can’t Touch This.”

What’s the best way to fill your time while waiting for the bus to come? Dancing obviously. Which perfectly explains the name of the next dance on our list, the Bus Stop. The Bus Stop gained notoriety when it was featured in a 1975 Rolling Stone article about disco dance crazes, but it didn’t reach its peak until the dance arrived in Chicago and fell into the hands of Charlie Green. Imagine strutting down the street – you swing your arms, while at the same time doing a little foot shuffle. Add in some butt shaking, and a Real Big Clap = and boom, a perfect ’70s dance. Almost nobody dances the Bus Stop anymore, but next time you’re waiting for the Partridge Family Bus to roll up I challenge you to boogie down!

Out of all the dances on this list, The Funky Chicken might be the weirdest. Wait, you say. I know how to do the chicken dance – I’ve been doing it all my life. But The Funky Chicken is different than the polka inspired chicken dance we’ve all known forever. Rufus Thomas improvised the lyrics to his 1970 hit “Do the Funky Chicken” during a live show, and his spur of the moment words were bizarre, goofy, and impossible not to dance to. Thomas started the song with his insane impersonation of a cackling hen, before telling people to flap their arms like wings and kick their feet – because that’s how you know you’re doing the funky chicken! Unfortunately, the Funky Chicken was a short-lived fad, because I’d sure love to squawk my way across the dance floor!

And there you have it – some of the wackiest dance crazes of the 1970s. Have you done any of these dances? Which are your favorites? Which will you never, ever do?