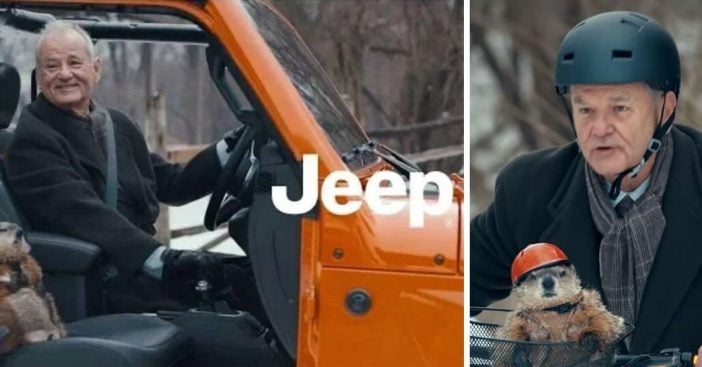 Bill Murray has appeared in his first commercial, and what he says will be his last. Jeep’s Super Bowl ad featured Bill as Phil Connors from the movie Groundhog Day. The ad was a nod to the fact that the Super Bowl and Groundhog Day were on the same day this year.

In the ad, Sonny and Cher‘s song “I Got You Babe” plays as the alarm clock says 6 am. Bill, as Phil, realizes he is in the world of the film Groundhog Day. He keeps saying, “Oh no,” as he encounters the same things. However, he sees one thing that is different: the new 2020 Jeep Gladiator.

He then kidnaps the groundhog, jumps in the Jeep and continues to live each day with his new animal friend. This time, he is excited to start each day over in his Jeep. Bill’s character Phil and his groundhog go to a local arcade, off-road in the snow, and engage in other fun activities.

At the end of the commercial, he says, “Not a bad day,” while Jeep’s tagline reads, “No day is the same in a Jeep Gladiator.”

Groundhog Day was originally released on February 12, 1993. It has been a popular film ever since. There is even a Broadway musical based on the movie! Reportedly, Bill was very hard to get in touch with to see if he would even consider appearing in the commercial.

Finally, he agreed, but he admitted, “This is my first commercial. I’m glad I did it with you (Jeep). And I’m glad that this is my last commercial, as well.” Watch the funny Super Bowl ad below:

Click for next Article
Previous article: ‘The Young And The Restless’ Has Been Renewed For Four More Years
Next Post: Rush Limbaugh Announces That He Has Advanced Lung Cancer