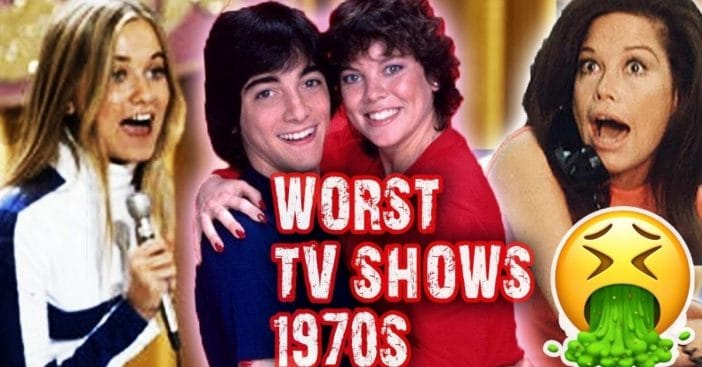 Who doesn’t love watching a bad movie now and then? Similar to that inability to tear your eyes away from a car wreck, there’s something fascinating about watching a film go up in flames. Terrible tv shows, on the other hand, are a different situation entirely.

Poorly executed tv shows require viewers to commit every single week to watch something awful. This repeated pattern is similar to circling around the block to drive past that car wreck again and again. So while bad movies live on in the cultural zeitgeist, terrible tv shows are often immediately forgotten. For guilty pleasure fanatics, here are some of the worst shows to come out of the 1970s.

Despite sounding like an idea invented by a group of rowdy six-year-olds, Me and the Chimp was in fact a real tv show that aired on CBS for one season in 1972. The show revolved around the Reynolds family and their pet chimpanzee, Buttons. Each episode showcased Buttons invariably getting the family into some sort of trouble. Whether he turned off an alarm clock or ruined a hand-drawn map, Buttons was a character of mischief.

And that’s it. That’s the basis of the whole show. If it seems like a rather thin premise to base an entire tv show around, you’d be completely right. The show was almost titled the more grammatically correct The Chimp and I, but lead actor, Ted Bessel, objected.

After a mere 13 episodes, audiences could take no more of that damned, dirty, yet admittedly adorable ape, and the show was canceled. Creators Gary Marshall and Thomas Miller would go on to make the iconic hits Happy Days and Laverne and Shirley. Lucky for fans, Marshall and Miller got all of their terrible ideas out of the way early.

“I pity the fool.” Sometimes having a brilliant comedic actor as your lead isn’t enough to save a sitcom. Just ask Pat Morita about his ’70s flop Mr. T and Tina. Focusing on a kooky inventor and his free-spirited nanny, Mr. T and Tina was one of the first tv shows to have a predominantly Asian-American cast. Unfortunately, there was nothing else redeemable about this dumpster fire of a tv show.

The show’s writing was just plain awful and relied on clunky stereotypes that seemed racist even back in 1976, which is really saying something. Critic Lee Winfrey might have said it best by saying “I feel like suing ABC for damages. If I ever watch it again it’ll be when I’m bound and gagged.”

Mr. T and Tina was so awful that ABC pulled the plug after only 5 episodes— which means that four unaired masterpieces are still out there for all of you masochists to discover!

Take one of television’s most beloved sitcom families, add in songs and dance, with some skits, and boom! A recipe for small screen magic. Except for the only magic produced by The Brady Bunch, Variety Hour must have been necromancy because it definitely seemed populated by the walking dead.

This shameless money grab attempted to capture the chemistry and popularity of its namesake sitcom. However, this wild miss was dead on arrival. First off, only one of the original Bradys was actually trained to sing and dance— a big problem when over half your show consists of musical numbers. Secondly, only papa Brady himself, Robert Reed, was enthusiastic about the show. This was interesting considering Reed often had problems on the original show.

Finally, the original Jan didn’t even participate! Another actor filled the role, and will forever be known to fans as “fake Jan.” Somehow an untrained, uninterested cast wasn’t able to connect with audiences, and the show was canceled after only 9 episodes.

In 1978, the movie Animal House was released and changed comedy forever. The era of the “gross-out” comedy was here, and everyone rushed to rip it off, including tv execs. Unfortunately for humanity as a whole, what they came up with was the atrocious sitcom Co-ed Fever.

The show was about the formerly all-female Baxter College starting to admit its first male students. Cue hijinks. Except, due to terrible writing and the increased censorship that goes with being on tv, Co-ed Fever was reduced to a string of tepid and overtly misogynistic fart and sex jokes. Gone was the humor and underlying pathos of the source material it was trying to capitalize on, and audiences could tell.

Eight episodes of this travesty were made, but after episode one was previewed in February 1979, the show didn’t even make it to its original time slot. CBS canceled Co-ed Fever after that first episode, citing low ratings and audience complaints. At least we were all spared the remaining seven.

Sometimes you wonder why a show was ever made in the first place. Supertrain was a tv show that focused on the social lives of people aboard the eponymous vehicle. The vehicle was a supermassive train that had swimming pools, shopping centers, libraries, and of course a disco. Basically a cruise ship on tracks.

The train would take 36 hours to travel between New York and L.A., which makes the speed of the train roughly 80 mph. At this speed, the vehicle moved slower than many Amtrak trains. So now we’re talking about what’s essentially The Love Boat on a cool, but really not that cool, train. Did we mention that this was a pricey hot mess? When it aired, Supertrain was the most expensive tv show ever— NBC paid over $10 million for models of the train alone!

With the train as the main character, the plot and storyline went to the caboose, and the show ended up being a boring mess. Supertrain was canceled after only 9 episodes, becoming one of the priciest flops in tv history.

Modern storytellers are always finding inventive new ways to tell the story of Sherlock Holmes. The modern BBC version is transcendent, and everyone loves The Great Mouse Detective. Then there’s the ’70s sitcom Holmes and Yoyo.

The show focuses on bumbling detective Alexander Holmes who, after injuring multiple partners, is assigned to android Gregory “Yoyo” Yoyonovich. Yoyo has super strength and is able to speed read and analyze clues expertly at the scene of the crime. However, he also has several foibles that reveal themselves in a most unamusing slapstick fashion. Bullets make Yoyo spring uncontrollably into dance, and a punch to the nose results in polaroid pictures shooting from his breast pocket.

Despite the inventive flipping of the traditional Holmes and Watson roles, Holmes and Yoyo suffered from horrible writing and was canceled after 13 episodes.

What if we took the wildly popular The Newlywed Game, and instead made it into a contest to see who knew a man better, his wife or his secretary? Sounds like a recipe for disaster, not to mention pretty darn sexist.

For one short season in 1979 this disaster happened. 3’s a Crowd started with a man answering a series of questions referencing his wife and secretary that was seemingly designed to upset marital harmony. The two women were then brought on stage and whoever matched the most answers with the man would win $1000. It was literally painful to watch marriages being torn apart in real-time, with each question and answer more cringeworthy than the last.

It was obvious that the contestants were having no fun— having your life ruined on national television can’t be that enjoyable. The show was unsurprisingly not brought back for a second season, saving countless future marriages.

Man oh man were those some not-great tv shows. How many of these do you remember actually seeing an episode of? Did we leave out any truly heinous ’70s fare? Or did we tear into something that you secretly loved?