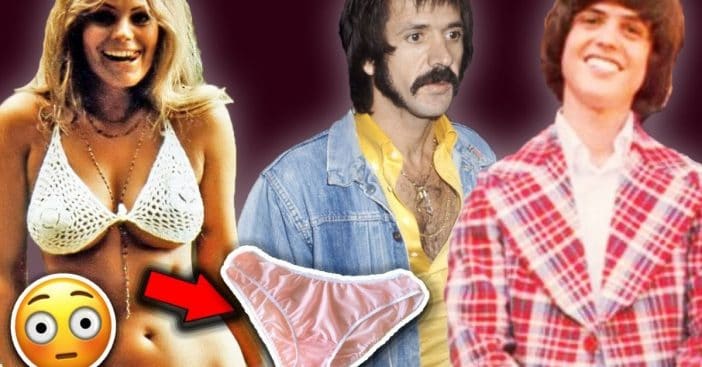 Sometimes we remember the past and what people wore with reverence, worshipping the fashion gods that came before us. But just as often we glance back in time and think, what the absolute hell were we thinking? Poodle skirts. Leg warmers. And so many trucker hats. People saved up money to purchase these specific fashion fads. And Every decade has its own fashion faux pas, but the ten-year period where fashion really spiraled out of control, the decade when people truly lost their minds has got to be the 1970s.

Today we’re going to venture down the rabbit hole of terrible ’70s fashion. Alright, tie on your ascots, zip up your jumpsuits, and pop some tops, because here we go!

If you hear the term “terry cloth” and think, “I’ve got no idea what that is…,” think again. Find your nearest washcloth, nuzzle it close to your face, and Boom!, chances are you’ve had a close encounter with the terriest of cloths. And guess what? Terry cloth makes a great hand towel. Its unique weaving on special looms allows it to absorb more liquid than the average fabric – great for cleaning up spills. Now imagine the same fabric encasing from head to toe a slightly sweaty, slightly overweight, very hairy, middle-aged man. Not exactly a pretty picture. And yet in the ’70s full terry cloth jumpsuits were all the rage. Maybe people were attempting to multitask?

Alright. I think we all need to take a second to reminisce about pop-topping because I feel like people who experienced this fashion disaster have bottled the experience up way deep down inside them. Before the introduction of today’s stay on tabs for beer and soda, the world was forced to make do with pop-tops – in which the ring used to open a can of delightful beverage would come all the way off. Naturally, someone in the ’70s had the grand idea to fashion these pop tops into clothes, and the results are exactly what you would think. Sometimes you looked like a knight who would soon meet a tragic end, other times an attendee of the Kentucky Derby in the post-apocalyptic future. Needless to say, this recycling fashion trend did not last. Oof I need a cold one.

Plaid from Head to Toe

Plaid. Plaid is fine. Plaid is great. Whether on a lumberjack deep in the woods or a Brooklyn hipster deep in his espresso, plaid shirts serve their purpose. But plaid pants? We’re starting to tread on some dangerous territory here. And combine the two? The result is the 1970s horror show that was the plaid suit. But, maybe the plaid suits of the ’70s were subtle and classy? Hard stop: I’m afraid not my friends. Back in the day plaid suits went in one of two directions: either so garishly loud that they became your whole personality or so bland and boring they looked as if a sofa store with leftover fabric suddenly pivoted into the world of fashion. A trend that hopefully remains buried in the couch cushions of the past.

Quick, picture someone wearing a suit. You probably have a pretty classy image in mind – don Draper from Mad Men perhaps. And for most of fashion history, that’s exactly what a suit has been – a super chic piece of formal wear that made you look damn good. And of course, the 1970s invented the leisure suit and ruined the look for everyone. With newly invented synthetic fibers becoming widely adopted in the fashion world, suddenly suits weren’t super expensive, only on special occasions items for the middle and lower classes. You could afford to dress like those big wigs on Madison Avenue all the time! Unfortunately, these appropriately named leisure suits traded silk for polyester and often came in horribly loud & ugly patterns. Ultimately people who were trying to look classy ended up epitomizing horrible ’70s fashion, and the leisure suit has fortunately turned into a punchline.

Someone who didn’t live through the ’70s can be forgiven for not knowing what the hell Shrink Tops are because they sound like something used to keep food fresh. So let’s introduce our younger viewers to the tasteless terror that seemed awful even back then. Shrink Tops were extremely tight, fairly tacky short sleeve sweaters knit from brightly colored yarn. They were meant to fit snugly over a blouse. Coming in a wide variety of patterns and colors, Shrink Tops certainly made a bold fashion statement. Please, please don’t let this ’70s fashion trend go the way of tie-dye and make a comeback today….just shrink away now.

One of the most insidious fashion trends of the 1970s was the gradual widening of, well, everything. We’ll start with collars. Throughout the decade, suit and shirt collars – especially for men – grew wider and wider until it looked like they could just start flapping and fly you on down to the disco. Efficient, but not a great look. Moving on to ties. Say bye-bye to the narrow, classy ties of the ’60s, replaced instead by fat, squat ribbons of cloth. Because as we all know, short and stubby just oozes chic. Finally, we have bell-bottoms. Now, I have nothing against a little flare around my ankles. But when you can use your pants to safely jump out of a plane, that’s where I draw the line. Fortunately, fashion has shrunk back to normal widths these days – (SHRINK TOPS INCHING BACK INTO THE FRAME LIKE THEY WERE BECKONED) – No shrink tops, NO!, we’re done with you. God, those things are persistent.

Now, let’s move on to one of the worst mash-ups ever, or as I like to think of it, the pineapple on pizza of the fashion world. The turtleneck and Blazer combo. And if that analogy is a bit confusing let me explain. Blazers, like pizza, are super cool. Good in any situation, they never fail to make you feel good. Turtlenecks, like pineapple, are perfectly acceptable. Both have their time and their place. Maybe your neck is cold, maybe you’re a beatnik poet from the ’50s, maybe you’re making a fruit salad. But bring the two together, and all you’re left with is a gross mess. Seriously. Even Steve McQueen couldn’t really pull this look off. Jack Nicholson in The Shining rocked it, and the combination of turtleneck and blazer obviously drove him insane and he tried to murder his family. So you should probably stay away from this fashion faux pas.

Vinyl you say, isn’t that what records and that couch in my great-aunt Sally’s basement is made of? In other words, plastic? Yes. People in the 1970s thought it was a great idea to bedeck themselves from ankle to neck in shiny, unbreathable plastic. I’m no expert, but that seems like it would make the hottest thing in the disco, not the beats or the dancing, but a person’s body temperature slowly rising to dangerous levels. Puts a whole new meaning to the Bee Gees Stayin Alive.

Ah, the ascot. A silly name for a silly piece of clothing. The ascot is a type of neckwear that evolved from the even more complicated and pretentious cravat in the 19th century. Think basically a looped, floppy tie. Although the ascot had disappeared from men’s fashion by the dawn of the 1900s, British hipsters in London during the swinging ’60s brought the tie back, and it unfortunately last way past its sell-by date. By the mid-70s it was basically a handkerchief tied around the neck, usually paired with some other hideous garment – leisure suits and ascots worked beautifully together to completely neuter the human sex drive. Fortunately, by the end of the decade, only Fred from Scooby-Doo was still plugging away on the ascot train. And hopefully, no one except Austin Powers rocks them in the future.

And there you have them. Some of the most atrocious fashion trends of the 1970s. Which did you used to tool around town in? Did we leave out any terrible trends that you remember? Let us know in the comments below – we read every one!