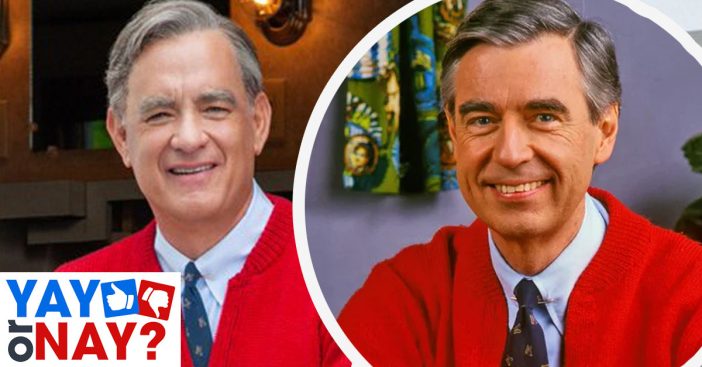 To start, this isn’t a paint-by-numbers biopic, ya know, starting with birth and ending with the inevitable. If you want to see that, I can refer you to an excellent documentary about Fred Rogers released by HBO last year. The Biopic format has been all the rage, with releases such as Rocketman, Bohemian Rhapsody, and Lincoln.
I imagine that the storytelling aspect of creating such a film is much easier when you just follow the biographical data. Although informative, these types of movies can come off like a shot list, which mirrors a Wikipedia entry on the person. By doing so, the film can miss capturing who the person really was.

Not Just Any Biopic – A Mister Rogers Biopic

This film did quite the opposite. It wholly captured the essence of Fred Rogers, while not really focusing on specific dates and events. In fact, Mister Rogers is not even the main subject of the film and by a quick ‘google search’ I learned that many of the details in A Beautiful Day in the Neighborhood were not accurate. This would make any moviegoer cry foul! Right? It shouldn’t. It’s near impossible to capture a lifetime of achievements by an accomplished individual in 2 hours. Even mentioning this brings back the childhood nightmare of watching Jesus of Nazareth in my basement every Easter, that movie has a 6-hour 21-minute runtime. The details of the Mister Rogers biopic carefully added or taken away, further illustrated more concisely Rogers’ essence and core message.

There’s a lot of half-brained biopics and remakes out there trying to make a quick buck these days. So when a ‘Mister Rogers’ movie was first announced, my knee-jerk was, “No, leave Mister Rogers alone!” Is nothing sacred!? Although, upon a further glance, I saw that the one and only Tom Hanks would be starring in it. This is an important detail, Tom Hanks is a bit of a historian, on top of being one of the most compelling actors of all time. It didn’t hurt either that he looks like Fred Rogers and is actually related to him. Mr. Hanks exceeded expectations, uncannily matching Rogers’s kind demeanor and calming voice.
Again, In opposition to a typical biopic or “nostalgia piece” of this era, the film does not feel like a cheap grab at “remember that” and “remember this.” You know the bit, a stupid one-liner everyone remembers said by one of the main characters. Proceeding with a “third-wall break” and a look at the camera. “You remember right?” Nope, not in this film, thank goodness.
Every bit of nostalgia is treated with due respect and subtlety, as our most vulnerable childhood memories should be. Characters like ‘Daniel the Tiger’ and ‘King Friday’ we’re elaborated on, rather than simply used as cheap “remember me” gags. A testament to the lack of kitschiness is seen by the director’s decision to leave out “Elaine Fairchild.” Sure, they could have done a quick nod to one of the most memorable and to some, most frightening characters, but maybe it just didn’t fit in right and I’m okay with that.

The film feels like a dream. If you remember the show, it had a similar effect. Particularly when Rogers would go to “The Neighborhood of Make-Believe.” The movie fluctuates from very real detailed scenes to ones that seem like a figment of the main character ‘Lloyd’s, imagination. And isn’t that sort of how our memories feel? A set of erroneous details, lucidly pieced together.

A Moral to the Story, Transcending the Individual and TV Show

Great stories generally carry a message that goes well beyond the plot, setting, and characters. Mister Rogers was a remarkable man, and the movie further illustrates a strong case for this fact. But we’re constantly reminded throughout the movie, that this is not what this story is about. Mrs. Rogers told the director “Don’t make Fred into a saint.” If he was canonized as a Saint then he would be robbed of his humanity. Being a perfect person would negate his faults and daily efforts in becoming a better person. In one scene Roger’s is exfoliating childhood details from the hard-nosed main character Lloyd. In defense, Lloyd brings up Rogers’ own children and the adverse effects his fame may have had on them. A bit taken back, Roger says, “I never thought of that.” This was one of many examples throughout the film that highlights Roger’s humanity; an ability to learn and grow. This Mister Rogers biopic shows us the deepest parts of not only our humanity but his, too.
By the closing credits, we are convinced Mister Rogers is not only a TV show character but a man that embodied what he preached on and off-screen. He reminds us we are good and bad people at times and it’s about how we channel emotions and practice forgiveness. Sometimes you have to travel back into your own childhood and grapple with some of your most hurtful memories. Mister Rogers challenges you to journey into “The Neighborhood of Make-Believe,” slay your childhood demons, and come back a better person.
RELATED: 7 Things You Never Knew About Mister Rogers
Click for next Article