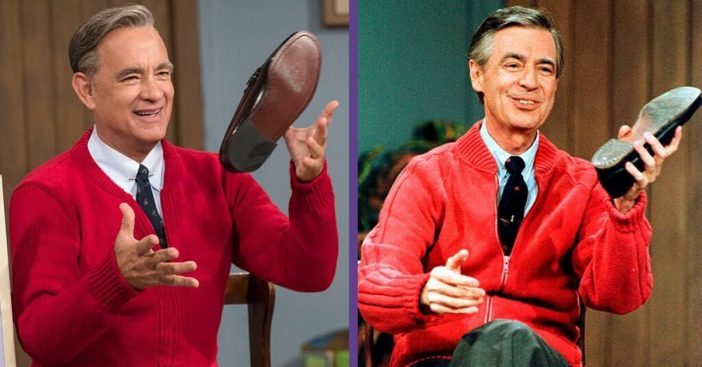 Ancestry.com has revealed that actor Tom Hanks is actually related to Mister Fred Rogers! Hanks is apparently his 6th cousin. It’s like it was meant to be, considering Hanks is portraying the beloved children’s TV show host in a new film. A Beautiful Day in the Neighborhood we’re even more excited about it!

Tom Hanks and Fred Rogers are each other’s 6th cousins

Moreover, Hanks’ great-great-great-great-grandfather allegedly fought in a skirmish at the Chesapeake Bay. “So, Rogers and Hanks not only share the same ancestor, they also descend from two brothers who fought for America’s independence,” Ancestry says in their statement.

Access Hollywood approaches Hanks and his wife, Rita Wilson, and asks about his family tree as they walk the red carpet. “No, impossible. No you’re pulling our leg!” Rita says in response to the news about Hanks being related to Rogers. “This is crazy!”

Hanks portraying his distant relative… What Are Critics Saying?

Hanks seemed not too surprised at this news. “It all just comes together, you see,” he says. “I’d like to see if Johnny Depp is related to Fred Rogers, can you find out from Ancestry.com?”

It warms our hearts to know that these two fine gentlemen are actually related! The new film about Mr. Rogers is already showing in some places, and will be released nationwide by Friday, the 22nd. The film actually won’t just focus on Rogers alone, but primarily on the close relationship he had with a reporter who was doing a profile on him. The film already has a 96% rating on Rotten Tomatoes from critics. In conclusion, check out one of the movie trailers for the film below!