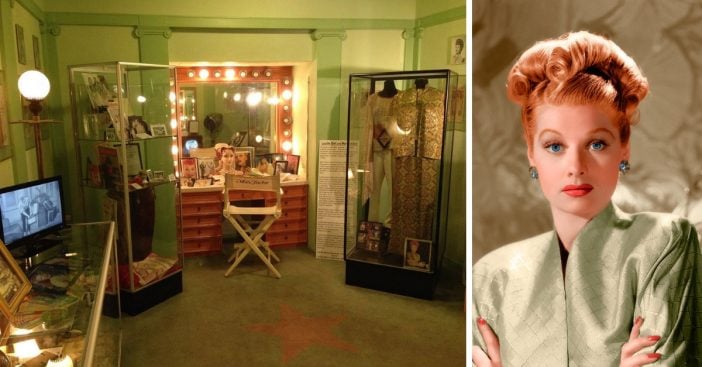 The Hollywood Museum recently launched a new exhibit to pay tribute to Lucille Ball and her iconic television series I Love Lucy. The world lost Lucille on April 26, 1989. 30 years later, the museum decided to share some items to remember her by. Over 200 people came to the exhibit’s launch, including Lucille’s granddaughter.

Donelle Dadigan, the museum’s president announced the launch of the exhibit called “The Lucille Ball Lobby Tribute.” They added items special to Lucille in her personal life and career in the lobby and created a “Redheads Only Room.”

Photos of the ‘I Love Lucy’ Exhibit

One of Lucille Ball’s Emmys is on display. She won several Emmys for her performance on I Love Lucy. For instance, she won an Emmy in 1953 for Best Comedienne, then 1956 for Best Actress – Continuing Performance. Later she won two Emmys for Outstanding Continued Performance by an Actress in a Leading Role in a Comedy Series in 1967 and ’68. The year she died, she received the Governor’s Award.

Some of Lucille’s costumes are displayed

Some of Lucille’s costumes are also on display. One, in particular, is from the film The Long Long Trailer, which she starred in with her then-husband Desi Arnaz. It was interesting to see them act together, but not play Lucy and Ricky!

There is also a “Redheads Only” room that pays tribute to Lucille’s signature look. The room also displays more of her costumes and jewelry. There is also a script from the movie Mame, which was Lucille’s final appearance in a film. Photos of Lucille are also scattered around the exhibit.

According to Closer Weekly, Kathy Garver (best known for her role as Cissy on Family Affair) said, “What a wonderful tribute to Lucille Ball at the Hollywood Museum! I so enjoyed the exhibit of memorabilia, costumes, and photos which were all beautifully presented. The experience is truly a ‘family affair.’ I love Lucy!”

Geoffrey Mark, who wrote “The Lucy Book,” said “Where else but at the exceptional Hollywood Museum could you find an extraordinary salute to Lucille Ball, and then find exhibit after exhibit showcasing the entire breadth of classic Hollywood history? A visit to the Museum is a must for anyone interested in the best that Hollywood had to offer, curated in the lovingly restored and iconic Max Factor building!”

Lastly, Bob Bergen (voice of Porky Pig from the beloved cartoons) shared, “There is so much to love about Lucy at The Hollywood Museum. The tribute to the red-headed legend was a memorable night of career highlights as well as loving stories of how she touched the lives of friends, colleagues, and family. To the nation, she was a TV treasure. To her family, she had the starring role of mom and grandma.”

Here’s a glimpse inside the museum’s exhibit!

Would you want to visit the I Love Lucy exhibit at the Hollywood Museum?

Get inspired with six of Lucille Ball’s most incredible quotes.