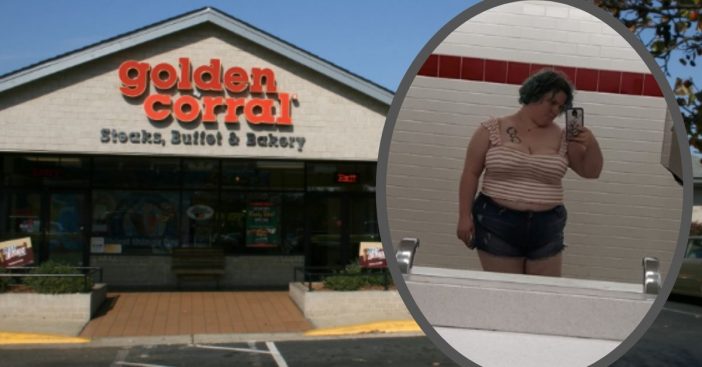 One woman is now claiming that a manager asks the removal of her out of a Golden Corral restaurant because of her outfit. Some restaurants have dress codes, but Golden Corral seems like one of the many who don’t. Sueretta Emke, a 25-year-old, says that the Golden Corral in Erie, Pennsylvania wrongfully tells her to leave because of what she was wearing.

Sueretta drives an hour to this Golden Corral that features an all-you-can-eat buffet with her husband and son. It is to celebrate her son’s birthday with his friends. When she went to get food, Sueretta says a manager tells her she is dressed “too provocatively” and has to leave.

What the Golden Corral manager had to say

Additionally, she says that the manager says he receives a complaint about her outfit, which is what prompts him to ask her to change or leave.

Sueretta spoke to NBC News about the situation. Allegedly, when she asks the manager if they have a dress code, he says no, “but it’s a family restaurant so if someone complains, we step in.” She then follows up with “So what if I am in there and if I have a problem with someone’s religious attire, would you make them leave?”

The manager apparently has no response to that. Sueretta apparently went to the franchise owner afterward to complain about what happened, but he defends the decision made by the location’s manager.

A Golden Corral executive reaches out

Golden Corral did not issue a comment when asked by NBC News. Sueretta stated that she did see other customers in the restaurant with more revealing clothing than her. She believes they discriminate against her for her size. “I really do believe something was said to me because I’m not thin, so it’s not considered sexy,” she said.

Thankfully, Sueretta was able to update everyone that a Golden Corral franchise business consultant reached out. They went on to deeply apologize for what happened. She explains in a Facebook comment on the original post.

In the letter from the Golden Corral consultant, they say, “Please be assured that the Franchise and I are looking into your concerns and taking whatever corrective action is appropriate.”

Sueretta explains that in the top she was wearing at Golden Corral, that it was her first crop top ever. She has become confident enough to wear one in public despite her size and the beauty standards of today. After what she experiences, she says, “I really felt cute in it and now I never want to wear that shirt again.”

This wouldn’t be the first time someone got kicked out of a place for a stupid reason.

Take a look at this story where two teens got kicked off a flight because the airline would not accommodate their peanut allergy!