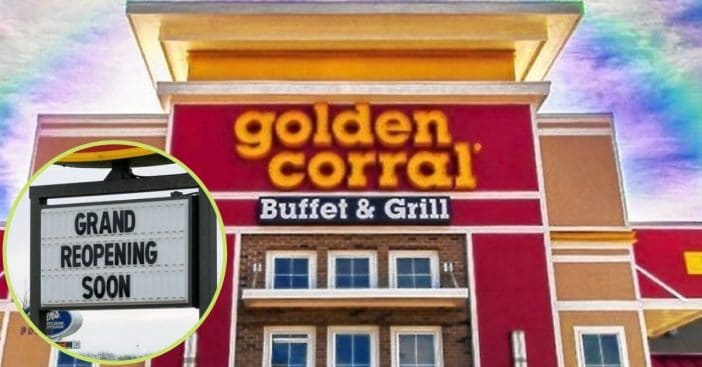 At the start of the pandemic, buffets were ordered to close in Georgia and Florida, which brought uncertainty to Golden Corral franchisee Eric Holm. He thought they would be okay with the cashflow they already had, but fast-forward about a year and a Chapter 11 bankruptcy filing later, it wasn’t looking too good.

“You sort of have a tidal wave of bills when your cashflow is $150 million and that suddenly stops,” he admits. But, they’re now getting a second life as 21 of the 33 stores he was operating pre-pandemic are now open. Bonus, at least one more is slated to open with a chocolate fountain!

RELATED: Iconic American Food Chains Are Filing For Bankruptcy As Sales Are ‘Hemorrhaging’

“Our Golden Corral business is going to recover fully and we’re going to be better. I expect we’ll be up 15, 20% in the third quarter.” Holm was the biggest Golden Corral franchisee at the start of the pandemic, and it’s safe to say there’s a large possibility he will reclaim that title.

Headaches of the pandemic

This whole process didn’t come without a lot of headaches and possible setbacks. He was dealing with banks, landlords, and more… and they all wanted their money, regardless of a pandemic. He had initially agreed to sell his Golden Corral holdings and expand the operation for the buyer, and this deal was struck just mere weeks before the pandemic hit. “I was carrying $48 million on a non-recourse loan. The banks wanted their money,” he says.

He even remembers telling one landlord, “Hey, have you heard of something called the pandemic? We have it here in Georgia, and it’s really something. We can’t even operate.” With this being said, it’s no wonder bankruptcy began looming, and ultimately was the final answer. “The banks got everything they wanted,” Holm says. “It is what it is. [But] we got the repayment terms we wanted.”

With the help of certain programs being rolled out during the pandemic, Holm was able to take advantage of Paycheck Protection Program funds and renovate all of his stores inside and out to get them ready to reopen. “We waited six or seven months until we reopened,” Holm says. “We bounced back to 80% on day one.”

And now that things are returning to somewhat normal, buffets are back in business and actually getting a second life. “The buffet is very relevant—it’s in high demand for our customers,” he says. “That’s why they come back.”