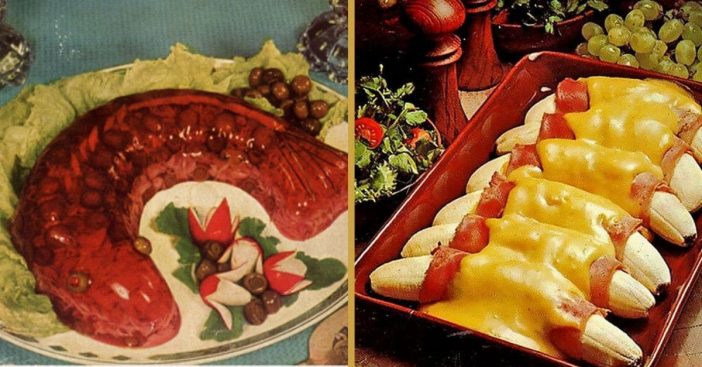 Growing up, we were all familiar with the picky-eater and most of us had a phase. You know the routine: imploring all the old tricks, spread your food around the plate, pretend to take bites, give a fake “Mmm… that’s good,” capped off with an “All done, may I be excused?” Yeah, Mom never did fall for it, but it was worth a try.  And for those that were critical of the choosey eater, we want you to hold that thought, because today we are counting down the most disgusting dishes from the past. No, we’re not talking about Brussel sprouts, creamed spinach, or Aunt Fran’s mysterious casserole with raisins. Sorry, Aunt Fran, we’re taking it a step further.

Today, we’re naming the foods that would even make the most adventurous open-minded diners think twice. From a Glace Fish Mold to a Ham and Bananas Hollandaise, the creators of these dishes must have been outright cruel, or perhaps they were picky eaters making us all feel their pain.  We can’t even imagine trying to stomach some of these now! What’s even more fascinating is that a lot of these dishes are still being made today, either vintage-style or with a modern twist. Whether the dish was for a special occasion or ‘just because,’ we are left with the same question “What were we thinking?!” Do you remember these disgusting foods?

Fair warning, the Monterey Souffle Salad looks nothing like a salad. This eye-of-the-dragon looking salad was created in part, by Star-Kist Tuna. They put out ads in 1955 containing this recipe. So check your cabinets now, and see if you can prepare one today. Look for lemon gelatin, tuna, preferably star-kist; mayonnaise and vegetables.

RELATED: Instagram Is Helping To Bring Back Nostalgic & Retro Food

And yes we honestly have no idea how any of that goes together. The veggies specified are chopped cucumber or celery, some sliced olives, chopped pimento, and of course grated onion. Because if we cry when we cut onion, just imagine the tears that’ll stream as you grate the little sucker.

The recipe also suggests Hellmann’s mayo, but personally being from South Carolina, the preference is for Dukes. Granted, Dukes has not been tried in this tuna jello, but maybe next year. A supporter messaged us saying her family would add a can of undiluted cream of tomato soup to spice it up.

To be honest, we have made a dish similar to this, just sans the jello: a Tuna Rice Salad. Brown rice, tuna, celery, lemon, and tomato — simple and cheap dish. However, not as exciting as this mold of fun. This jiggly dish was often made in a 1950s casserole dish. So, it could suffice for virtually any occasion. We’re not entirely sure it would’ve made the Top 10 list at any special event, though.

Honestly, this one doesn’t sound too bad, but definitely might not be the healthiest.  Similar to the Star-Kist promoted Souffle, this recipe is brought to us by a product. An original ‘60s ad for this sweet treat says “Holiday Candy Favorites made better with Karo (CARE-O) Syrup,” which is basically a sweet corn syrup with added salt and vanilla.

This was probably a hit back in the day during Christmastime, but we’re not sure it would still hold up today against Limited Edition Peppermint Bark Oreos, for example! Yum! This is a vintage recipe that has been adapted for modern convenience. Most recipes online now abandon the sculpting into a tree, and just have the delicious peppermint popcorn plopped in a bowl. And I for one appreciate the recipe modification.

The recipe itself is quite simple; popcorn, white chocolate candy coating and peppermint candy. For a twist, you can substitute dark chocolate for the white, you just won’t get the ‘White Christmas’ snowy effect.

Here at DoYouRemember? we’d like to take a moment to acknowledge the many things that go well together. Laverne & Shirley, Bert & Ernie, Milk and Cookies and, of course, 7-up & Mayonnaise… Okay, maybe it’s just me, but I don’t think mayonnaise, 7-UP, and Jello go together.  The recipe is as basic as it sounds. Mayo, 7-UP soda, diced fruit, marshmallows, cream cheese, and of course, gelatin to make this less-than-appetizing concoction.

Just look at that texture, folks. Can you say, “Yum?”  This ‘salad’ is traditionally served for the holidays and has a tropical flavor due to the pineapple, cherry, and lime flavors. This recipe gained some popularity a few years ago when Ellen highlighted a comedian named Kalen, who gained fame by live-commenting those popular overhead-shot recipe videos.

Apparently this dish isn’t as crazy as it sounds, tasting somewhere between a key lime pie and a citrus cheesecake. Why is the mayo even in the recipe? Is it to cut down the sweetness? Is it to gross out my brother Pat, who cannot touch the stuff? But we’re gonna leave it in, because it’s been in the recipe for almost a century.

Ever felt the need to take flaked fish, chopped pimento, and throw it in a gelatin mold? Nope, neither did we. Hey, it’s shaped like a fish, that’s pretty cute, isn’t it? Nope, not at all. It definitely makes the list for our Top 10 disgusting foods.

Now, this one actually might take the cake (or the jello) for the most jaw-dropping dish on this list. I mean, just look at it. This recipe is basically a Jell-O’d fish that is often completed with ‘olive eyes.’ You start out melting the gelatin with sugar, salt, and lemon juice. Then fold in the fish — you can use any type of fish or even shellfish. Along with the flakey seafood, add green pepper, cucumber wedges, onion rings, pimento, and celery. And that’s it. Pour it into your fish mold that we all have handy and serve with a bowl of mayonnaise on the side, because, why not? Finally, the garnish and, for the greatest touch, place the olives for eyes to give off the appearance of the fish actually being alive. That way, you can meet your jiggly fish before you devour it. Ummm… Bon Appétit? Mmm… Maybe not!

Nothing screams perfection like the sight of this bad boy. Another ‘salad’ on this list that doesn’t actually look anything like a salad — noticing a trend here? This one can be added to the ongoing pattern of foods being made with Jell-O back in the day.

Again, you would start by melting the gelatin and stirring in the apple and Lemon juices, along with vinegar and water. Next step is adding all the ‘Perfection.’  Add in the carrot, celery, cabbage, green pepper, and pimento before pouring into a mold. Any type of fish mold or other would do. And you guessed it, serve alongside this perfection the perfect bowl of miracle whip or mayo to add more excitement. Apparently, it’s a very lemony sweet and sour coleslaw. I’ve also heard of people using shredded apples and lime flavoring to give it a different twist. I also wish I could go back in time like Marty Mcfly, not to bet on sports, but to buy stock in pimientos and mayonnaise, because they were in everything!

The 42 Cent Lunch. I’ll take it. This one is so close to being delicious if it wasn’t for that raw egg. Because I know from my father yelling at us to ‘stop eating the raw cookie dough or you’ll get sick,” that raw eggs are a no-go in my household.  Also, poking out the center of the bread and injecting an egg, feels like a last-minute science fair entry.

Egg Nests, also known as Cloud Eggs, are nearly as popular today as they were back in the day. You’ll need some basics: eggs, bread, butter, and salt. That’s it! First, toast your bread. Then separate your egg whites from the yolks. Beat the heck out of the egg whites until stiff. It only takes a minute with an electric beater. Now, it’s time to assemble.

Take out your mayo and pimentos — just kidding. Butter the toast, dollop the egg white on each slice and make the indention in the middle for your prized yolk. Now you just bake it for 15 minutes and serve with salad, milk, and fruit for an entire lunch display!

An Apple Pie without the apples? Blasphemy!  Hey, it was invented during the depression. And you know what they say: “When life gives you Ritz Crackers, make apple pie.” That is the saying, right? While it still looks like a tasty Apple Pie, don’t be fooled! It’s called a “Mock” Apple Pie for a reason, as it’s made with Ritz Crackers instead of real apples.

However, according to recipes, it tastes just like regular Apple Pie. First off, bring to boil water, sugar, and cream of tartar before dropping in whole crackers to boil for five minutes.  Then pour all into a pie crust and sprinkle with cinnamon and lemon juice. Top with additional crushed crackers, brown sugar, and cinnamon and, bingo, an apple pie sans apples! So, if you can get over the fact that it’s made with Ritz Crackers on the inside, then this might be a go-to dish for any special occasion. And maybe fool some people while you’re at it. Not!

Banana Hollandaise is perfect for any brunch occasion, and commenters on these recipes actually say this is delicious. And you can cheat with a jar of hollandaise instead of the mix packets. But just don’t leave off the sauce, as it cuts through the sweetness of the banana while the mustard pairs with the ham to add saltiness. Well, I’ll be damned… some people actually enjoy this.

This one was popular in the 1960s and consists of many different layers of filling and ingredients from mayonnaise — of course —  to pickle relish to ground cooked ham and horseradish. While the dish gives a ‘frosted’ appearance, do not be fooled — surely isn’t sweet as you’ll be biting into a savory loaf you will never forget. Even old advertisements for the loaf show a cake-cutter being used to slice through it, so the taste may come as a shock to some who are expecting a carrot cake.

The frosted loaf holds a surprise in every layer, so this is technically one of the more advanced dishes on our countdown.

It’s nice to end the list with something that isn’t so repulsive-looking: the Frozen Fruitcake Salad! It’s more of a sweet treat with pretty basic ingredients. Blend together sour cream, sugar, lemon juice, and vanilla followed by all the fruits and nuts you desire. Such choices can be pineapples, diced bananas — no mustard this time — cherries, and grapes. Don’t forget the walnuts! Complete with lettuce leaves in the middle for garnish, it may not look super tasty, but with all those ingredients, it sure sounds like it!

Do you remember your grandparents whipping any of these up for a special event or to punish someone’? I sure do! Is there a twist on one of these classics that makes your recipe book? Or did your grandma make something entirely different yet completely off-the-wall for special occasions? We want to know what your disgusting foods were!