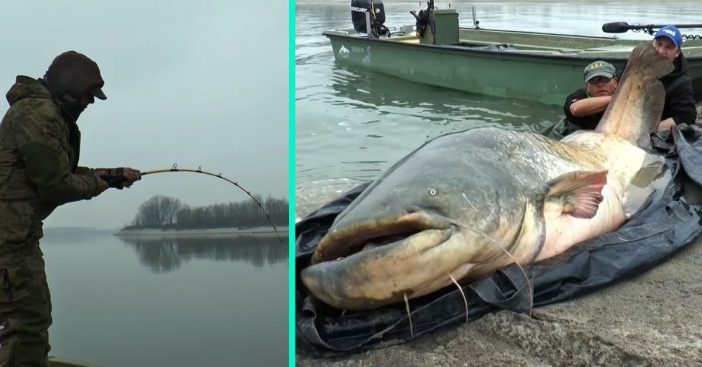 Roughly two years ago, one man made history. Often, when thinking about underwater wonders, the ocean comes to mind. But freshwater creatures can be as impressive as their saltwater peers. For an example, look no further than the 9-foot catfish caught by Benjamin Gründer. At the age of 37, Gründer made history with this massive catch.

The fisherman reeled this colossus in at River Po, Italy. Already, the place boasts a reputation for having massive catfish. Gründer, though, caught the biggest fish there – and around the world, setting a new record. Coming in at 8.8 feet, the catfish weighed an estimated 284 pounds. Looking at the size of those fins, that’s entirely believable.

When it’s time to reel in a big catfish, leave it to the professionals

Benjamin Gründer, 37, is described as a professional fisherman. With this experience, he likely knew how other ambitious fishermen held River Po, Italy in high regard. And, with his knowledge and skill, he managed to reel in the biggest and best there was…that we know of so far.

The catfish Gründer reeled in came to about 8.8 feet in length. Weight estimates put it at around 284 pounds, though, again, that is an estimate. At the time Gründer caught it, there were no scales available and Gründer intended on throwing the catfish back into the river, which he did do. Before that, though, he and friends posed with the massive catch, and the sense of scale really emphasizes how gigantic this catfish was.

The historic catfish in question had fins bigger than Gründer’s head. And it’s body overall appeared bigger than his very boat. This proves you don’t have to be chasing sharks with Chief Brody to need a bigger boat. Gründer had to fight for 45 minutes to reel the catfish in, realizing quickly that his line had not, as he originally believed, just caught on a tree root.

History changed that day; plenty of sizable fish call Po River, Italy home, but none had appeared quite as big as the one Benjamin Gründer caught. His posting on Facebook quickly gained media attention and all sorts of outlets wanted to showcase the accomplishment.

Click for next Article
Previous article: The Cast Of ‘The Courtship Of Eddie’s Father’ Reflect On Show’s 50th Anniversary
Next Post: Throwback Photos Of Jennifer Aniston Before ‘Friends’ Are Circulating