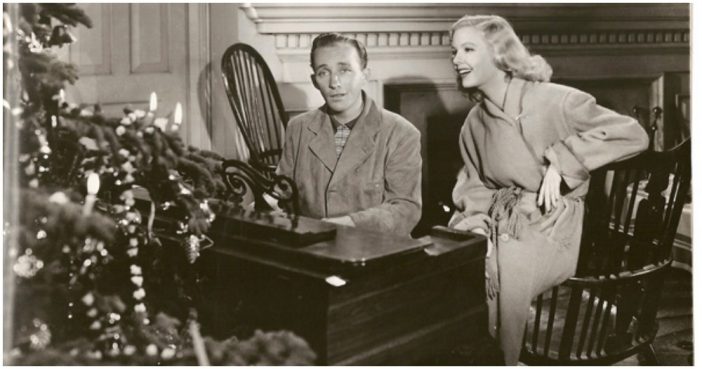 It’s a typical sunny day in Jupiter, Florida and Nathaniel Crosby, the seventh son of Bing, is fresh from the golf course. Far from a White Christmas.. It was a habit, and later a profession, he picked up from his famous father who passed away when the younger Crosby was 16.

While Bing charted an astounding 386 songs between 1927 and 1962, there’s one track above all that’s more associated with the legendary singer than any other. “I think people identify him with Christmas just as much as Jesus and Santa Claus,” Nathaniel jokes. “We have some downloads of dad’s stuff we play, and if I have a couple of tequilas you’ll hear me try to chime in.”

When Crosby’s iconic “White Christmas” came out 75 years ago this year, it was welcomed as readily as a sleigh full of gifts, becoming one of the most successful songs in the history of recorded music. (With 50,000,000 copies sold, the Guinness Book of World Records dubs it the best-selling single of all time.) Arguably helping launch an entire genre of Christmas music, its melancholy lyrics and memorable melody have been covered by an immense array of artists, with its sentiments soothing a grieving and terrified nation navigating its way through a bloody, far-away and all-consuming war. But despite its subsequent stature and accolades, it was all originally conceived as a simple joke.

RELATED: A 1972 Video Of Neil Young Catching A Store Selling Bootleg Copies Of His Records

“I discovered [Irving] Berlin began writing the song as a parody,” explains Jody Rosen, who penned the 2007 book White Christmas: The Story of an American Song about the track’s history and impact. “It started as kind of comic novelty song, lampooning sentimental 19th-century ballads. It was only after Berlin wrote the song’s famous chorus that he realized that he’d struck gold: his ‘satirical’ sentimental ballad worked great as a straight-up sentimental ballad, played straight. ‘White Christmas’ was the accident, in other words.”

The ironies of the song’s success only grow from there. Not only was Irving Berlin Jewish, but Christmas was anything but a happy time for the man who would gain a reputation as one of the greatest songwriters in American history after writing everything from “There’s No Business Like Show Business” to the nation’s theme song itself, “God Bless America.” An immigrant who grew up dirt poor in New York’s Lower East Side, his first son, Irving Berlin Jr., died a month after birth on Christmas Eve 1928, which (as legend has it) led to Berlin visiting his grave every Christmas. It was during the writing process of the 1942 film Holiday Inn when Berlin first wrote “White Christmas” for Bing Crosby, then a major movie star. Mary Ellin Barrett, Berlin’s daughter, simply boiled down the original goal of the song to Rosen: “She once said to me, ‘It was a song sung to a blonde by Bing Crosby.’”

For Crosby and his team, recording and releasing “White Christmas” played into what became a wider plan to shape Crosby’s image. “His identity with Christmas was a strategy, I think, of Jack Kapp’s,” explains Nathaniel of the iconic founder of Decca Records, who fostered Crosby’s success. “Just like having dad sing national identity songs or anthems, whether the Irish or Hawaiian or Hispanic songs. He recorded songs that were basically intended to last forever.”

Ironically, recorded in May 1942 and released in July as part of the soundtrack of Holiday Inn, “White Christmas” later struck a chord with a country in the heart-wrenching throes of World War II with millions of American troops relating to its famous lyrics and dreaming of being home for the holidays. Explains Rosen, “The narrator is recalling a Christmas in the past, ‘merry and bright’ days that are now remote and not quite attainable. The song distills the feelings of nostalgia and longing that surround Christmas. For many people Christmas is a melancholy, disappointing time; it’s an anticlimax.”

The track sat pretty at  No. 1 on the charts for 11 weeks, and at the 15th Annual Academy Awards in March 1943 won the Oscar for Best Original Song, later returning to the No. 1 spot that December, repeating the feat again in 1944, America’s last holiday season in WWII. Later re-recorded in 1947, the track became so ingrained with Christmas culture that an eponymous smash film was later fashioned around it, which saw Crosby star alongside Danny Kaye. That, too, became a holiday classic. “The movie wasn’t until 1954 which was towards the end of dad’s career in film,” says Nathaniel. “After that, it was played every year on national television before Christmas, when TV was just three stations. At the same time, his radio show was getting millions of listeners a couple times a week.

So he had a captive, undivided audience, which led to him (and the song) having a direct relationship with most of the country.” In addition, Crosby’s annual televised Christmas variety specials became an American tradition and garnered Super Bowl-sized ratings from the ’50s to the ’70s. “I was in them from age 5 to 15 and for the finale, we’d always sing ‘White Christmas’ and wear all of these silly outfits. I’d have to pretend to sing, so I’d be mocked and teased by fellow jocks in school the next day. I was also probably the first guy to have his mic turned off on live television.”

Aside from Nathaniel’s experience, throughout the intervening seven decades “White Christmas” holds the distinction of being one of the most covered songs of all time, a virtual must for an artist crafting a holiday album. Among them, The Drifters put a doo-wop spin on the track in 1954 (peaking at No. 2 on the R&B Best Sellers in Stores chart), Ella Fitzgerald belted its lyrics in 1960 and Otis Redding posthumously had a bluesy version in 1968. In the ’90s, the sax stylings of Kenny G had success with the song, while Garth Brooks’ country version was a hit, too. Destiny’s Child released their take on the track in 2001 and Taylor Swift dropped acoustic version in 2009. Even this year, Gwen Stefani’s album You Make It Feel Like Christmas featured a bubbly version.

“I think it’s great that you have newer stars who are doing renditions of the song,” says Nathaniel of the song’s resonance. “But I think dad’s version will always be synonymous with Christmas.”

Click for next Article
Previous article: Here’s How ‘My Favorite Things’ From ‘The Sound of Music’ Became A Christmas Song
Next Post: George Michael Remembered A Year After His Death