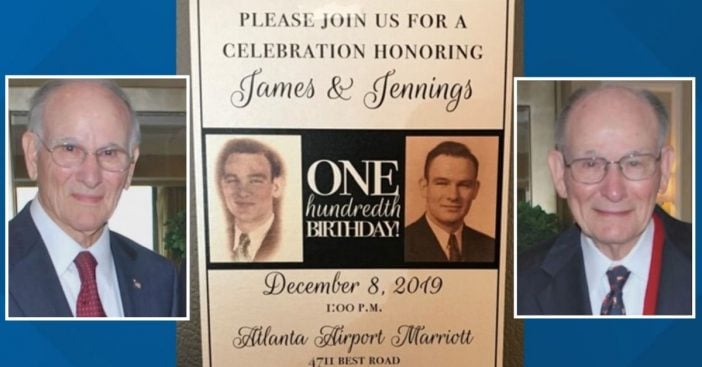 James and Jennings Watkins served in World War II and just turned 100 years old! “It don’t feel any worse than being 99,” James says. A celebration for the twins’ birthdays was held Sunday at Atlanta Airport Marriott. “When you’re 100 years old you lose most of your friends, but we’ve got a lot of family and friends here and we appreciate them being here,” Jennings chimes in.

Both of the brothers say they have a lot to be grateful for as they reach a new life milestone. “The Lord’s been good to me,” James says. “I’ve had a lot of friends. That’s what keeps me going.” Jennings adds, “So we’ve had a wonderful life, really… Good parents, good family, and good friends. We were in business together for 43 years and was very successful.”

James and Jennings Watkins talk about secrets to longevity

As mentioned previously, the twins served in WWII together. “I started the business and he joined me when he got out of service,” Jennings says. “I was discharged before he was.” As for their secret to living a long life, they credit something reasonable and realistic. Eating healthy! At least that’s what James thinks. “He and I just use to eat a lot of vegetables, we still do,” he says.

Jennings says he’s still trying to figure out what his secret to a long life is. “I don’t know what the  secret is but, I think God’s not through with us yet.”

Check out the incredible footage below of the Watkins brothers talking about their life, turning 100 years old, and more. Happy birthday to these two great men and a huge ‘THANK YOU’ for their service!