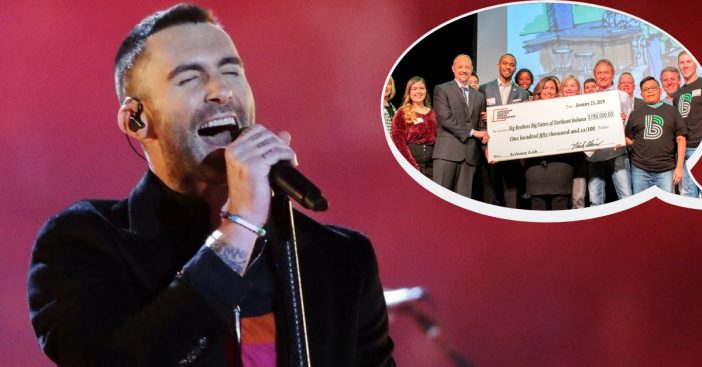 The Super Bowl is one of the most highly-anticipated events of the year, as is the Super Bowl halftime show. Most people actually tune in just in time for the musical act to perform and this year’s act included Maroon 5, Travis Scott, Big Boi, and a special cameo cutaway from Spongebob Squarepants in honor of the cartoon’s creator passing away last year.

The fee that performers earn for doing the halftime show is $500,000, and instead of putting it in their pockets and leaving, Maroon 5 decided to donate the money to Big Brothers Big Sisters of America charity.

Adam Levine, frontman of Maroon 5, spoke in an interview about the opportunity to play the Super Bowl.

“Playing the Super Bowl has been a dream of our band for a long time,” he said, “We thank the NFL for the opportunity and also to them, along with Interscope Records, for making this donation to Big Brothers Big Sisters, which will have a major impact for children across the country.”

Big Brothers Big Sisters of America’s mission, according to their official website, is to “provide children facing adversity with strong and enduring, professionally supported one-to-one relationships that change their lives for the better, forever.”

Pam Iorio, the non-profit’s President and CEO, spoke to E! News about the contributions that Maroon 5 and the NFL have made towards the charity. “We believe that all of our nation’s youth need someone who believes in their potential, and we are so honored that the NFL, Interscope Records, and Maroon 5 are supporting Big Brothers Big Sisters of America in our important mission.”

The Big Brothers Big Sisters program ensures a general growth and improvement for both individuals involved. A ‘big’ and a ‘little’ are paired up from a match specialist, coming from diverse backgrounds and different walks of life. It’s up to you to spend time with your big or little, and the charity actually encourages spending more time with each other than spending your own money.

There are plenty of community-based programs as well as school-based. There are also special programs for children of military families and children with incarcerated parents, so being able to give back to these children who may endure some struggles in their upbringing.

Be sure to SHARE this article if you support Maroon 5’s donation to Big Brothers Big Sisters!

Check out the video below of Maroon 5’s performance at the Super Bowl halftime show: