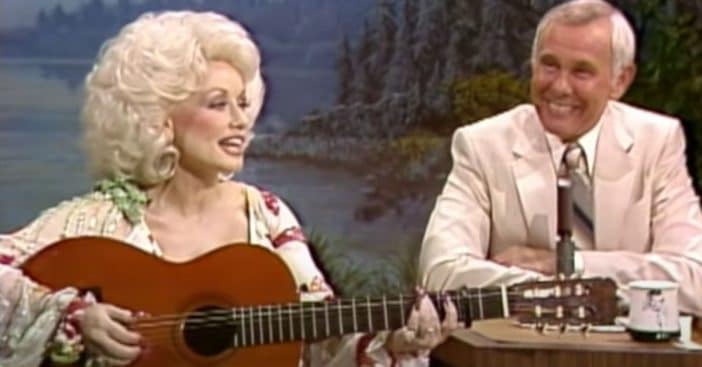 Dolly Parton once appeared on The Tonight Show back in 1979 to perform a hilarious song she wrote for Johnny Carson. Parton is sporting a stunning blonde bob, gold hoops, and a white dress with sequins as she chats with Carson for part of the 15-minute segment. “But I wrote a song for you or about you and about the show so whenever we get through talkin’,” Parton says, to which Carson follows up asking if it can wait until after the commercial break.

Well, Carson then hilariously pulls out a box of cereal to do a mock advertisement: “Quaker Corn Bran. The first bran cereal with the great taste of corn,” he says in place of an actual commercial segment.

Eventually, Parton is able to introduce her song. “Well I wrote this song because it’s been real good for me ever since I started on your show and you said one time once I got to real famous I probably wouldn’t come back on the show but I always will. I’m here about as much as you are,” she jokes. “I only really like to [watch the show] when you’re on. I don’t call it The Tonight Show, to me it’s The Johnny Carson Show.”

“Now I have dreamed of stardom since I was just a kid / Me and dollar dream beneath this $13 wig / and my bell bottom jumpsuits with my rhinestones all aglow / I became an overnight success from The Johnny Carson Show.”

After the performance and joking about how that song will one day become Parton’s next hit single, she said, “Well, I just wanted to do something nice for you, because I really do feel like you’ve helped my career.” So sweet! Check out the full segment below.

Click for next Article
Previous article: How John Wayne Almost Went Broke During The Height Of His Career
Next Post: Reese Witherspoon Changed Her Name When She Became Famous