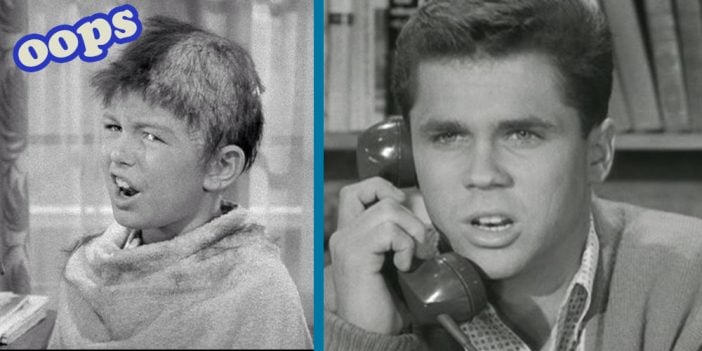 Leave it to Beaver aired from 1957 to 1963 and quickly rose in popularity as the archetypal suburban family of this wholesome era (or at least some sort of idealized alternate universe).

Despite its cheesy quaintness from today’s point of view, the iconic family show imparted some solid life lessons to multiple generations of viewers around the world and has earned its place in TV history. It was one of the first primetime sitcom series written from a child’s point of view, and it is still a fan favorite today. Here are some facts about the classic show you might not have heard before.

1. THE SHOW HAD THE FIRST “SERIES FINALE” WITH FLASHBACKS

Prior to Leave it to Beaver only one show ever had a designated “series finale” to finish it off, which was Howdy Doody in 1960. Leave it to Beaver ended with a retrospective flashback episode called “Family Scrapbook” where all the characters gather to reminisce about old photographs.

It was a nice way to wrap up a series rather than just ending abruptly with some random episode. Flashbacks are now a commonly used device on TV sitcoms and dramas, and most long-running series cap off with a grand finale.

The pearl necklace was ever present in June, but that was not a character choice either.

Actress Barbara Billingsley made that choice herself since the necklace was good at covering up a surgical scar that she had on her neck.

June Cleaver was always seen in heels from a certain point in the show on, but it wasn’t just because they looked nice or fit into her prim and proper character description.

The producers actually suggested the wardrobe choice when her TV sons started going through growth spurts and were threatening to tower over her.

There is one episode where footage of Mayfield is shown, which was shot it in Skokie, Illinois.

None of the actors were there for this filming.

5. IT WAS NEVER REVEALED WHAT STATE THE CLEAVER FAMILY LIVED IN

Many people tried to figure out where the Cleaver’s lived but it was never specified. One time Beaver wanted to buy a surfboard which led people to believe that they might be close to the beach.

Another time Wally mentioned the governor living in Madison which led people to believe that they were in Wisconsin. They left it vague so it could be anywhere (kind of like The Simpsons Springfield).

6. HE ALSO COULDN’T GET ANY ROLES AFTER THE SHOW ENDED

Frank Bank was so typecast from the show that he ended up quitting the business. He was once offered a role in a pilot about the Archie comic books, but it didn’t work out.

A rep for one of the potential sponsors of the show said: “I love the show, but I can’t get it out of my head that that’s Lumpy on screen, not Archie.”

7. FRANK BANK CLAIMED TO BE A LADIES MAN

Frank Bank played Clarence “Lumpy” Rutherford, on of Wally’s pals, and he made sure to let people know that he did not have the same troubles with the ladies that his character did on screen.

He wrote in his autobiography that he had slept with over 1,000 women. Good to know.

8. BUT JERRY MATHERS HAD PLENTY

Jerry Mathers began his professional career at the age of two and a half. He was shopping with his mom at the Broadway Shopping Mall in downtown Los Angeles where he was spotted by a store employee who wanted him to model in their catalog.

Things just took off from there, including commercials and multiple movies.

Click ‘NEXT’ to see how Tony Dow got the role of Wally with zero acting experience!