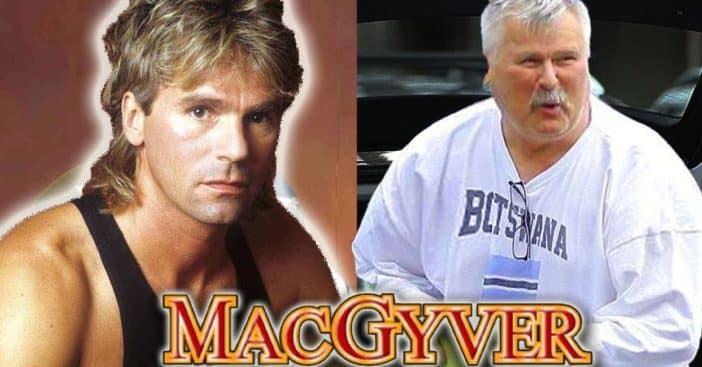 His mind is the ultimate weapon. The guy who once said, “If I had some duct tape, I could fix that,” that’s guy who people tuned in to watch for seven years, from 1985 to 1992. MacGyver followed secret agent Richard Dean Anderson as  the titular MacGyver, who used his scientific knowledge and inventive thinking to solve complex situations. This show taught young people the importance of science and creativity over the colorful violence so often used in media. With the Fonz himself as an executive producer, he and his partner John Rich hit the jackpot with this one, aided by a strong cast for MacGyver.

So, today we’re checking out the cast of the original MacGyver series and seeing what they got up to after the show ended. Be prepared for some creative facts about your favorite stars along the way. But quickly, come on we have to go, the bomb ticker is counting down fast!

MacGyver is a resourceful secret agent with a knack for using everyday objects to create innovative solutions to complex problems. Despite his impressive skills, MacGyver is a humble and down-to-earth person, always ready to help others, even if it means putting himself in danger. So that’s why when the casting director saw Richard Dean Anderson audition, he won the part because being nearsighted, he was unafraid to use his personal reading glasses during the take, showing a lack of pretension that the creative team wanted.

RELATED: The Cast of ‘Conan The Barbarian’ Then And Now 2022

Born in Minneapolis, Richard dreamed of being a professional hockey player, until a three-month stint in the hospital with broken bones convinced him to try other things. Like the road; he hit the open road via a nearly six thousand-mile bicycle trip from Minnesota to Alaska. Although he was accompanied by friends at the beginning, he traveled the final thirty-three days alone. The experience gave him a much more centered sense of direction in his life – and not just toward Alaska.

His big break came in 1976, being cast as Dr. Jeff Webber in the popular soap, General Hospital. Then he was one of the seven in Seven Brides for Seven Brothers – the TV version, specifically, which also starred River Phoenix as the youngest McFadden boy in his first-ever acting role.

Besides his iconic MacGuyver, for which Anderson produced the two TV movies that followed the series, Richard is also well-loved for starring in Stargate SG-1, a hit series based on the 1994 Kurt Russel film.

Never married, he dated many high-profile women including actresses Teri Hatcher and Lara Flynn Boyle. More on Teri Hatcher shortly. But since 1996, his partner has been Apryl A. Prose, mother of his only child. Today at 72 years old, Anderson has retired from acting and now focuses on his family and his philanthropic work, including aiding several environmental organizations around the world.

Pete Thornton is the head of the Phoenix Foundation and works as MacGyver’s boss. He is a former government agent and is highly skilled in espionage and covert operations. He has a close relationship with MacGyver and is always there to offer advice and support. Similarly, Richard Dean is always there for Dana, as Dana originally only appeared as a guest star in the pilot episode until Anderson recommended to the producers that he join the show playing a different character. He did exactly that in the eleventh episode as Pete.

Dana’s TV debut was in 1952 on Guiding Light but his first recurring role was as Sheriff George Patterson during the end of season one of Dark Shadows. He was also in the 1968 Of Mice and Men TV show playing Carlson. That starred George Segal and Will Geer from The Waltons.

Sadly, during MacGyver, you’ll remember his character slowly going blind during the sixth season episode titled “Blind Faith.” That was due to the fact that Dana himself was going blind due to glaucoma. He required special computer equipment to read printed text for the rest of his life, and his blindness was also written into a guest appearance on Law & Order in 1993. We can’t forget to mention one of his 40-odd film roles, which just happens to be one of my favorite films of all time. He played FBI Agent Polk in Newman & Redford’s The Sting in 1973.

Dana would eventually succumb to pneumonia in June of 2005 at the age of 77.

Jack Dalton is MacGyver’s best friend and partner in crime. He is a former Special Forces soldier and an expert in demolitions and firearms. Naturally, that makes him best friends with Angus MacGuyver. Bruce McGill provides some comic relief in his 18 episodes, usually trying to swoon whichever ladies are in the chosen episode. Pete hates him, so what else could you possibly want?

Bruce McGill is perhaps best known for his role as Daniel Simpson Day, better known as “D-Day,” in the 1978 comedy film Animal House. This guy has had a great career, with huge parts in blockbusters like The Legend of Bagger Vance and then playing a guy who’s about to be duped in 2003’s con artist flick, Matchstick Men. Both fantastic films, if you need some movie recommendations. And all Jean Claude Van Damme Van fans must remember Dalton from 1994’s TimeCop.

Most recently you could find him on the 2022 Amazon show, Reacher, which takes the Tom Cruise film and shuffles it up with an actor who is not 5-foot-5, but instead is a beefcake of a man ready for the role.

Today, Bruce is 72 years old and has been married to his wife Gloria since 1994. When he’s not acting, which he’s still very much doing, he is sailing, playing piano, and guitar. Maybe not all at the same time, however.

Wilt is a friend of MacGyver’s and is often seen helping him with his various projects. He is a skilled mechanic and is able to provide MacGyver with the tools he needs to get the job done. Mossley was born in Vancouver and joined the cast in season three after Henry Winkler had successfully moved production from LA to Canada to lighten the load of costs.

Robin Mossley has been married to Helen Jarvis since 1995. Both he and Helen worked on the movie Dudley Do-Right in 1999, as Helen is a successful art director, supervising huge projects like Justice League in 2017.

These days he keeps a pretty low profile at 67 years old. He hasn’t acted since 2011 in an episode of R.L. Stine’s the Haunting Hour. However, he still does interviews from time to time, like this one from 2021.

Nikki Carpenter is the girlfriend of MacGyver, beautiful and smart and always there to help with MacGuyver’s latest mission. She joined the show in season three as well and completed eight episodes total.

Other guest appearances include Hawaii Five-O and her five-episode stint on How the West Was Won back in the ‘70s. That was her start but you may also remember her from three episodes of Matlock – or her five-episode arc on the second season of Life Goes On, playing Doreen Gillespie.

She was previously married to Jeffrey Rian Dunas and they had one daughter together. Alexa Davalos followed mom into acting and still works very hard to this day. From 2004’s Chronicles of Riddick, to leading the highly esteemed Amazon show, Man in the High Castle, as Juliana Crain, she is a talented actress for sure.

Today Elyssa is 65 and last acted in 2007 in the Emma Roberts-led Nancy Drew, but she’s produced a straight-to-video chihuahua movie and a travel show called Coin’s World in 2016. So it appears she’s not quite done with the movie business as of today.

Murdoc is a master of disguise and an expert in assassination. He often uses his skills to manipulate those around him and gets satisfaction from causing chaos. He’s pretty much MacGuyver’s main rival – menacing but with a bit of humanity still.

Michael Des Barres began acting in 1960 with a small role on the show Whack-O! We’d also see him in films such as the classic 1967 To Sir, with Love, and opposite Clint Eastwood in 1989’s Pink Cadillac. Besides MacGuyver, Michael also appeared on TV with The New WKRP in Cincinnati and Melrose Place.

In addition to his acting career, Des Barres has also had a successful music career. Interestingly, he formed Chequered Past in 1982, and actually met the members of Duran Duran when Chequered Past opened for a few of their shows during their 1984 tour. In ’85, when Robert Palmer withdrew from the Duran Duran side project Power Station just before their American summer tour, Des Barres was chosen to take his place as lead vocalist. As a member of Power Station, Michael co-wrote “We Fight For Love,” the end-credit song for Commando. He did not, however, appear in the film. Recently in 2015, he released his own solo album The Key to the Universe.

You can listen to him 5 days a week, As he’s the host of Little Steven’s Underground Garage on SiriusXM, listened to by more than six million listeners a week.

Today he is 74 years old and the last time we saw him act was in the MacGyver reboot as Murdoc’s mentor.

After being Amy, the Love Boat mermaid for two years, Teri joined the cast of MacGuyver playing Penny Parker. She is Angus’ friend and they look out for each other, like when Penny is cast in a play for season four, MacGuyver fears it’s all a setup by his arch-nemesis to trap him.

The episode is titled “Cleo Rocks” and Mac’s archnemesis, Michael Des Barres, actually composed the lyrics for the song “Cleo Rocks” from this great episode.

These two were fantastic together, and that’s thanks to in part the fact that they dated for a while as well.

Teri’s career continued to climb way after this show. Highlighted by her Lois Lane from Lois & Clark: The New Adventures of Superman and of course her Emmy-nominated role on Desperate Housewives. Today at 57 years old, she still looks absolutely stunning, provnd by her 2021 Hallmark film, A Kiss Before Christmas. We’re sure to see more of this fabulous actress in the future.

Even though the show was held together with duct tape and paper clips, MacGuyver will never be forgotten. Heck, they even made a spoof movie and TV show called MacGruber.

So tell us, have you watched the reboot at all? Did you enjoy either of the TV movies after the original run? What episode of MacGuyver stands out as his best, or most inventive fix? Who is your favorite MacGyver cast member? Get in the comments and share your thoughts.