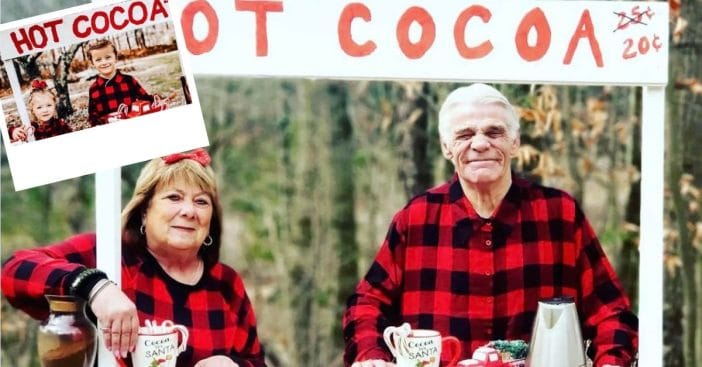 Not all presents end up under the tree. Some turn up in our mailboxes when family and friends send heartfelt Christmas cards, often including photos of themselves, kids, and pets. One couple, Carol and Michael Whalen, decided to put a twist on this fun tradition; the couple recreates their friends’ Christmas cards – using themselves in place of kids.

The idea came to mind after their friends sent a Christmas card with a photo of their child at one year of age. The youngster was pictured in a vibrant red car bedecked in a wreath and tree, while he himself wore a cozy knitted sweater. Seeing this, Carol, 68, suggested, “You know, we ought to replicate it.” And so they did.

This couple recreates the festive joy from the Christmas cards they receive, with a twist

Every year my parents recreate the Christmas card our friends send them of their kids, here’s this years! from MadeMeSmile

“She has a red car, and I have a knit sweater,” Michael, 72, noted after the couple worked out the logistics of having additional fun with this festive card trend. “We just sort of reenacted the photos and it received such a warm response from our group, next year we just continued the tradition.” Their friends supply them with great inspiration; cards now feature their five and two-year-olds. “It was just something that caught our attention because we have three children and we’re still waiting for a grandchild,” Michael explained.

RELATED: The Newest Chevy Christmas Ad Is Making Us All Emotional Wrecks

Their friend group now has a running joke that his and Carol’s idea was actually “plagiarized” by their friends, Ryan and Samantha Dominik. One of the latest photos of their kids features the siblings standing side-by-side at a hot cocoa stand, the softened whites in stark contrast to the festive red plaid of their outfits – and, of course, a miniature of the red car that started it all. And as for the Whalens? They responded to the very first photo by tossing a tree and wreath and tree on their distinctive red car – yes, with a cozy sweater on. And now the two are seen in a new photo manning a hot cocoa stand with an almost 1:1 recreation of all the decorations on the counter.

Carol and Michael are parents to Christopher, 37, a filmmaker and writer who was recruited to help ensure their pictures turn out perfect. He too recreates the Christmas cards. He loves the tradition and says it’s just characteristic of how the whole family – including the Dominiks, close friends to them all, behave. “We’re a family of goofballs, so it’s pretty much par for the course,” Christopher explained. “I think it will go on for as long as they’re alive, to be honest.” Michael and Carol have already shown readiness to go the extra mile. With the new Christmas card photo habit firmly set in place, Samantha felt bad about the cocoa stand being so elaborate, but though she offered to lend the Whalens the booth, they set to building one themselves.

While their photos and cards embody the holiday spirit, their conduct does as well. “Mike and Carol have been like parents to Ryan,” Samantha revealed, “and he has lived with them on three different occasions growing up. They have always played a huge role in his life, and our kids are lucky to have a third set of grandparents.” A post of one photoset exists on Reddit but upon request from friends, the Whalens’ other son, Jeromie, did not share anymore and removed additional photos except the original. This new tradition has just given both families something new to look forward to as the end-of-year holidays roll in, as Samantha shared, “Every year we mail our cards around Thanksgiving and we wait to see what they will respond with.” Do you have any special family traditions for this magical time of the year?

RELATED: This Is The Best-Selling Christmas Album Ever Made

Click for next Article
Previous article: ‘Miami Vice’ Star Philip Michael Thomas Is Now 72 And Voices A Popular Video Game
Next Post: The Top 10 Mind-Blowing Car Chases From The 1970s