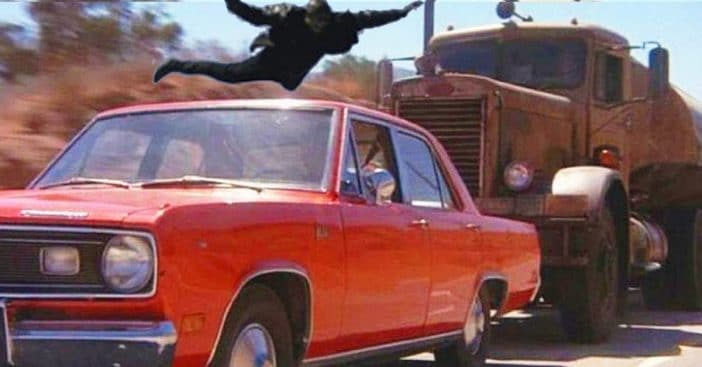 Vroom! Swerve! Crash! There’s nothing quite as exhilarating as watching the perfect car chases in a movie. Racing through the streets, at ever-increasing speeds, careening out of control, smashing anything in their path, or gracefully missing an explosive wreck by just a couple of inches. Either way, they make the adrenaline flow and set the heart a’racing, in ways that few other cinematic scenes can.

So let’s check some out. Today we’re looking at some of the best car chase scenes from the most rev-ed up decade of them all: the 1970s.

Yep, we’re gonna start with the granddaddy of them all, possibly the best car chase in history, the iconic scene in 1971’s The French Connection. Detective “Popeye” Doyle, played by the incomparable Gene Hackman, is pursuing a hitman on an elevated train in a car on the streets below – cue mayhem. The scene is shot partially with dashboard and bumper-mounted cameras, so you feel like you’re right there in the car with Hackman. The scene also involves stuntmen in cars who were supposed to narrowly miss each other but end up colliding, and was considered so dangerous to film that the movie’s director William Friedkin operated the camera in the car as he was single and the rest of the cameramen were married. All in all a heart-pounding adventure!

Long before E.T. and Jurassic Park wowed audiences, Steven Spielberg made his directorial debut in 1971 with the action thriller Duel. About a commuter being chased and terrorized through Southern California by a rogue truck driver, the whole movie features numerous exhilarating car chases. Spielberg beautifully paces the scene, reminding you that car chases don’t necessarily have to go fast. The scene where our hero, stopped at a train crossing, is being inexorably pushed towards the oncoming locomotive will have you on the edge of your seat! And perhaps the eeriest and threatening aspect of the whole movie is that Spielberg never shows the truck driver – the two-ton face of death remains a mystery the whole film.

‘The Man with the Golden Gun’

While any number of heart-pounding car chases from ’70s Bond movies could have ended up on this list, the chase scene from 1974’s The Man with the Golden Gun made the cut – not for the pursuit itself, but rather for one spectacular stunt. Roger Moore’s Bond, in a brilliant piece of product placement, has commandeered an AMC Hornet and gone tearing off after the baddies. But they, unfortunately, give him the slip, and Bond is left facing half of a rickety, broken wooden bridge. Which he promptly decides to jump. The Hornet revs up, hits the bridge, and does a remarkable 360-degree corkscrew in midair, landing safely on the other side. The stunt is incredible, was modeled on a computer beforehand in a first for Hollywood, and was nailed in one take at the first attempt. Then the producers decided to ruin the whole thing by putting the sound of a slide whistle over top. Silly.

Borrowing heavily from another iconic chase scene in Bullitt, the high-speed pursuit in 1973’s The Seven-Ups is sure to leave you breathless. The chase takes place on the streets of upper Manhattan between two Pontiacs – a Grande Ville sedan and Ventura coupe – driven by Roy Scheider and Bill Hickman. As the cars bounce up and down the steep grades of the roads, they shear off parked cars’ doors, careen through garbage, and generally treat New York like a giant pinball machine.  The scene abruptly ends when, in a tribute to Jayne Manfield’s death, Scheider’s car plows into the back of an 18 wheeler, tearing off his roof like a can of sardines. He survives, but the audience can be forgiven for any heart attacks that occurred at the sudden and horrific end of the chase.

Have you ever been watching a movie and thinking to yourself, “Hey, wait a second, there’s not enough adrenaline pumping through my veins right now. Must not be enough car chases in this movie!” If so, then boy do I have the movie for you. Cause 1971’s Vanishing Point is basically just one long car chase. The film is about a disaffected former race car driver delivering a souped-up Dodge Charger from Denver to San Francisco in under 40 hours while using enough speed to get the whole audience buzzing. As you may have guessed, everything does not go especially well for our driver, and he’s eventually pursued by the entire California Highway Patrol in a thrilling chase that ends in tragedy. A cult classic and a must-watch for fans of chases everywhere.

A movie with chase scenes galore in a post-apocalyptic Australia, directed by the great George Miller and starring a young, exceptionally handsome, Mel Gibson? Yes, please. And it’s the chase scene that opens the movie that really sucks you in and lands on this list. Gang leader Nightrider and his girlfriend have killed a cop and escaped onto Australia’s highways, evading or destroying numerous patrol units along the way. Enter Mel Gibson, the baddest cop this side of Brisbane, and Nightrider’s luck changes. Mel rams the back of the gang leader’s car at a crucial moment, distracting the murderer and leading to his magnificent, fiery explosion of death. A fantastic way to introduce the Road Warrior to the world, and one of the best movie opening chase scenes of all time.

Two bootleggers have to get 400 cases of Coors beer from Texas to Georgia in under 28 hours? Sounds silly but back in the day Coors was prized for not containing any preservatives, and couldn’t be found East of the Mississippi. So it makes sense that 1977’s Smokey and the Bandit was a massive hit, made Burt Reynolds and Sally Field into household names, and gave us one of the most memorable car chases in cinema history. Reynolds drove his iconic black 1977 Pontiac Trans Am as the “blocker” to distract the police from the illegal shipment and distract them he did. Reynolds led sheriff Buford T. Justice, played by Jackie Gleason, on a merry chase, culminating in the famous shot of the Trans Am leaping over a broken-down bridge, a stunt performed with the aid of a rocket strapped to the car. An awesome scene that blazed onto our list!

A movie about a silent getaway driver for bank robberies that starred Ryan O’Neal and was the inspiration for 2017’s hit movie Baby Driver? Yeah, it might just have a cool chase scene or two. And While 1978’s The Driver has many awesome, action-packed sequences, the scene that stands out the most happens about halfway through the film. Why this one you ask? First of all, the chase happens at night, which was unusual then and super cool now. Second, O’Neal is driving a red pickup truck, not your usual car chase car, and racing with a Pontiac Firebird with bad tribal tattoos. Third, the chase ends up in an industrial warehouse, so moments of intense speed are blended with periods of almost inertia – i.e. great pacing. The chase also ends in a high-stakes game of chicken!

Sorry all you Nicolas Cage fans out there, we’re not going to be talking about the terrible 2000 remake Gone in 60 Seconds, but in fact the 1974 original. And why, might you ask? Maybe because if the sheer volume is your bag, then it’s hard to beat the final chase scene in the first, best Gone in 60 Seconds. The chase scene lasts an astounding 40 minutes, yes you heard that right, 40 minutes. And in the process over 93 cars were wrecked. In the age before computer graphics, that’s a whole heck of a lot of crashes. The jump that ends the chase is also impressive, as the Eleanor, a souped-up 1971 Ford Mustang, managed to reach a height of over 30” feet over a distance of 128”, something that wouldn’t ever be attempted today without CGI or a gas-powered catapult. So go watch it.

And there you have them. Some of the most rip-roarin’, pulse racing, intense car chases of the 1970s. Which do you remember watching on the big screen? Which did we forget? Let us know in the comments below, we read every one!