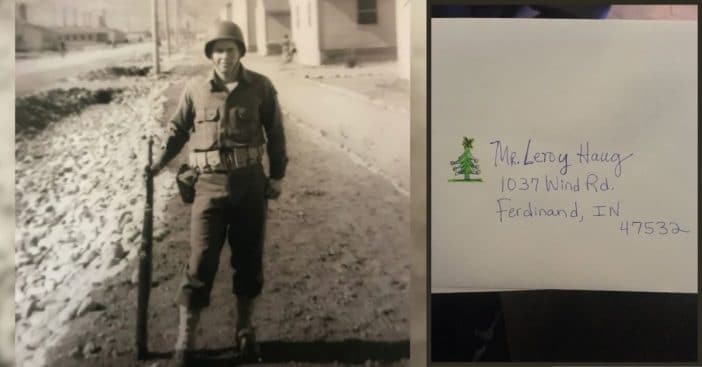 Leroy Haug, who is 99 years old, had his 2020 Christmas wish fulfilled as he received more than 1,000 letters from people around the world after sending a request to a local news station. He sent in a request to WEHC reporter Shelley Kirk earlier in December describing his time during WWII, specifically his deployment and his time fighting for General Patton’s Third Army.

He signed his letter with “A very lonely vet, L.V. Haug, Ferdinand, Indiana.” His wife died back in August and was asking the outlet if they could help bring him some Christmas cheer in the form of some Christmas cards. He got his wish!

His great-grand-nephew, Joe Gratz, was able to confirm that Haug received over 1,000 Christmas cards. He adds that Haug “was trying to open them all but had to take breaks because there were so many.”

RELATED: Couple With Down Syndrome Receives Over 100 Christmas Cards From Complete Strangers

People send cards, letters, and even drawings to Haug. “These cards have really lifted his spirits, especially the ones from children,” says Gratz. “And they have given him something to do to pass the time.”

Just saw this tweet and sending a card to your Uncle from Lake Mary, Florida so he might be getting it late. I’m sorry for the loss of his wife. pic.twitter.com/P5GdS2pb3H

In a statement to the news station, he was sure to thank the people who took the time to send him cards. “I want to thank everybody for being so nice to me and sending all these cards,” he says in his statement. He similarly asked Kirk to spread the same word for his upcoming 100th birthday in February.

He tells WEHC that he can’t wait to open every single letter and respond to as many as he can. For those who are still interesting in sending Haug a little something, you can send it to: