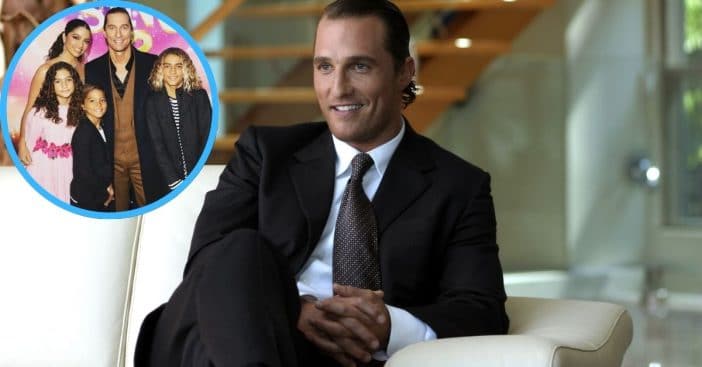 The Greek Theater in Los Angeles played host to a special photoshoot on Sunday in honor of the premiere of Sing 2. Actor Matthew McConaughey was joined by his family for his latest red carpet walk and his wife took to social media to express what a meaningful event it was.

The premiere-turned-family event included McConaughey, 52, his wife Camila, 39, and their children: Levi, 13, Vida, 11, and Livingston, 8. Everyone was all smiles celebrating McConaughey’s return to Sing 2, an animated musical due out in theaters on December 22.

Yesterday, Camila Alves McConaughey took to Instagram to share photos of her family attending the red carpet premiere of Sing 2. She shared two photos in two separate posts; one shows McConaughey and their two sons Levi and Livingston. This photo is accompanied by the caption, “The 3 most important male presence in my life… what a blessing to see the boys so big,” along with abundant hearts and excitement. Camila, herself Brazilian, added a Portuguese translation.

Next, the most recent photo posted shows the whole family of five: McConaughey, his wife, and their three children, including now daughter Vida in a flowery pink dress. “Now with the LADIES,” Camila captioned this version. “Look at Vida guys!!!! This young lady has changed my life,my partner in crime!!! One of a kind! This movie highlights so many important things in such a fun, joyful and entertaining way I can’t wait for you all to see.” Again, she then expressed these sentiments in Portuguese.

Love at next sight

The courtship between Matthew McConaughey and his wife is a bit different from the fairytale formula but ended up strong. Camila moved to the U.S. when she was 19 to pursue a career in modeling and has since acted in several films, including Snow Dogs and The Confidant. On top of that, she is a writer and entrepreneur, running the blog Women of Today and managing both a line of handbags called Muxo and the food company Yummy Spoonfuls, which provides organic meals to children.

She met McConaughey when the two happened to be at the same bar in Los Angeles back in 2006. “The first interaction, I did not know who he was,” Camila admitted. “At the time he had a really long beard, and he had this rasta hat. He was all covered up, and I didn’t really realize who he was.” It was the appearance of McConaughey’s friend Lance Armstrong that clued her in and Camila bowed out right then. McConaughey had to berate himself into approaching her; the two shared a conversation in Spanish and Portuguese, he invited her friends to gel with his, and the rest is history.

Now, she celebrates Sing 2 as an especially meaningful project of McConaughey’s, as it tells the story of a determined musical artist who shoots for the stars – literally.

RELATED: An Inside Look At Matthew McConaughey’s Eight-Year Estrangement From His Mother