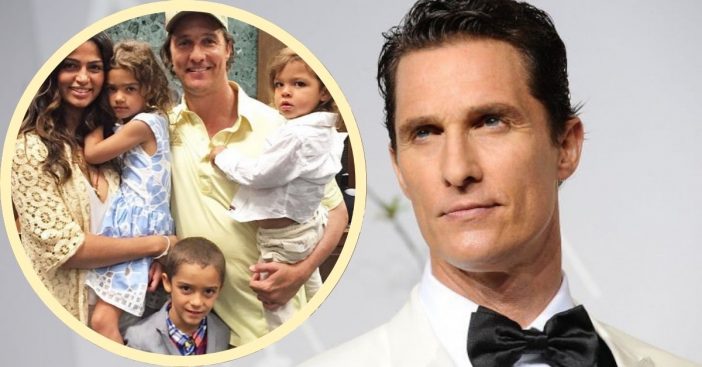 Matthew McConaughey has some specific thoughts about dynamics between dads and their kids; specifically, they shouldn’t be “buddies.” He shared his thoughts on what Yahoo! Life calls QCODE media’s kiddie podcast. Film director and screenwriter Jeff Nichols joined him because of their history.

The two worked together in the surpirse, quiet success Mud. Since then, they sparked something of a friendship that allows them to be candid together. Their joint philosophies on life blend into Mud and vice versa. Hear why Matthew McConaughey warns about dads being their kids’ buddies here.

Matthew McConaughey says dads shouldn’t be “buddies” with their kids

When discussing Mud (2012), which tells the story of an escaped fugitive, the topic honed in on parenting. In particular, he respects the approach used by Nichols and notes that it parallels his own. “Jeff is very, what’s the word, fairness is a big value for Jeff Nichols as a man and as a father,” he explained. “He’s not someone who intrudes on your space. He doesn’t enforce himself.” As a result, Nichols “creates a distance.” The actor went on, “He lets Sam become who he is. We’re similar in that we want to have autonomous, conscientious children.”

At the end of the day, this means “I’ve seen fathers be too much buddies with their child and not enough of a father. Jeff walks that line really well.” In response to the question of describing each other as a father, Nichols voiced a similar note of respect for Matthew McConaughey and his delicate “buddy” system. Nichols noted, “The first word that just popped in my head was thoughtful.”

Walk the line with all friendships too

Parenthood comes in a variety of packages and includes different family types, structures, and styles. To raise kids into well-rounded adults, some values vehemently promote teaching them to put hard work into earning certain treats. Then, those treats also come with a set of responsibilities. Both McConaughey and Nichols put compassion into their parenting and their friendships. But even then, they also maintain a balance.

“I have no trouble going, ‘No thank you. Thanks but no thanks.’” the actor and bourbon spokesman admitted. “We don’t B.S. each other. If we’re coming together creatively, we’ve really considered it and why.” Though, the answer to that why might not always be clear or designed for the public, because he also admitted, “Jeff and I are always looking for ways to work together. We work together on quite a few other things that aren’t even about real entertainment of any kind.”

Click for next Article
Previous article: Tim Allen Shares Photo He Found Inside An Old Toolbox That Got Him Emotional
Next Post: In An Era Of Streaming Services, Over Two Million People Are Still Getting Netflix DVDs By Mail