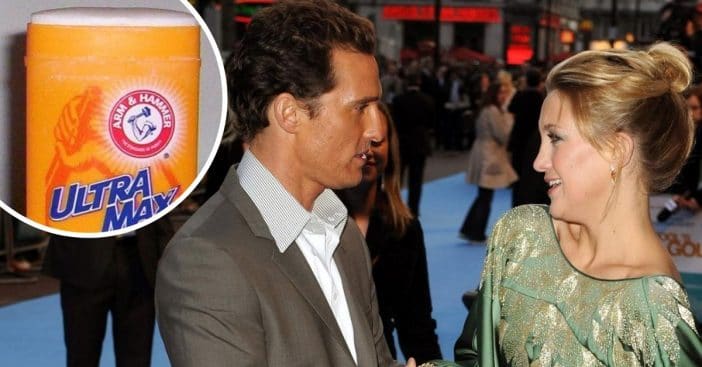 Matthew McConaughey and Kate Hudson have worked together in several films. While they reportedly got along pretty well, there was one big issue. Apparently, Matthew doesn’t wear deodorant or cologne!

Kate and Matthew first worked together in the 2003 movie called How to Lose a Guy in 10 Days. They were so great together and the audience loved them as a couple. Five years later, they worked on a movie called Fool’s Gold. Apparently they remained friends and have talked about making more movies together.

However, Kate did not care for Matthew’s “natural” scent! He has spoken out saying that he doesn’t like wearing deodorant or cologne. He also said his mother and other women in his life don’t mind. Kate did though!

She reportedly brought him some natural deodorant to wear, but he refused. Especially while filming Fool’s Gold, he had his shirt off a lot. Matthew admitted, “She always brings a salt rock, which is some natural deodorant, and says, ‘Would you please put this on?’ I just never wore it. No cologne, no deodorant.”

What’s your take on Matthew refusing to wear deodorant? He must be kind of stinky!