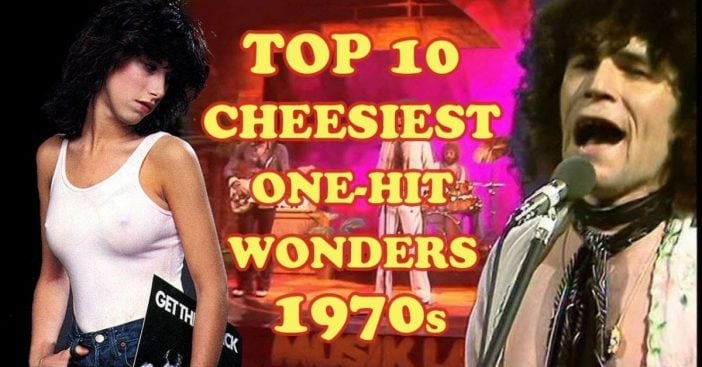 Today we’re bringing you the top then ’70s one-hit wonders. How did they come about? What were they about? And of course, where are they now? Dust off those bell bottoms, throw on a halter top, some hoop earrings, and get ready for some good times. Here we go.

Let’s start from the bottom to the top. Can you already take a guess at what one-hit wonder will fill our #1 spot on this list?

10. The first one hit-wonder… “Dancing in the Moonlight” – King Harvest

Although “Dancing in the Moonlight” can certainly be described as a happy song, its origins actually aren’t happy at all. In fact, the inspiration for this song is downright terrifying. Musician and writer, Sherman Kelly and his girlfriend took a schooner from St.Thomas to St. Croix. They decided to camp out on the beach under the moonlight. There they were brutally attacked by a local criminal gang. His girlfriend Adrien was raped and feared that she might be killed, but all of a sudden Sherman gained consciousness and made enough noise to scare the gang off, most likely saving both their lives. Sherman suffered from broken ribs and a fractured face and the doctors didn’t think he would make it. Fortunately for the world, he did.

Although he couldn’t play in a band for a long time, he was still writing and during his recovery, he wrote “Dancing in the Moonlight.” He wanted to write about a world that was pretty much the exact opposite of the night he experienced in the Caribbean. “Dancing in the Moonlight” is about a world where nobody “barks and nobody bites” the feeling is “warm and bright” nobody “fusses and nobody fights.” The song went on to chart at number 13 on the billboard, was covered by the Baha Men, and was hit all over again when it was covered by an English band Toploader. The song prominently features a Wurlitzer piano which you might recognize from some other famous songs.

“Brandy (You’re a Fine Girl)” was released in 1972 by the Looking Glass, from their debut album Looking Glass. It was written by Looking Glass lead guitarist Elliot Lurie. The song was originally released as a B-side to the single “Don’t It Make You Feel Good,” but was then released as a single itself because it was more popular than the A-side.

The song is about a barmaid at a busy seaport who falls in love with a sailor. Even though Brandy is a fine girl, they cannot be together because the sailor’s first love is the sea. A pirate’s life for him I guess. The story is remarkably similar to that of a Mary Ellis, a famous New Jersey spinster who waited until she died for her love to return from the sea, but the writer, lead guitarist of the Looking Glass, claims it’s just a remarkable coincidence and it is actually loosely based on a girl he knew named Randy. The song went all the way up to number one on the U.S. Charts, and was recently featured prominently in the blockbuster Marvel hit Guardians of the Galaxy series as the opening scene. He’s 71 years old now. Still performing, and still has a great voice.

Released on Knight’s 1971 debut album of the same title, it became a huge crossover hit. The song spent five weeks at No. 1 on the Billboard Soul Singles chart and peaked at No. 2 on the Billboard Hot 100 Singles chart. Knight performed the song on Soul Train on December 11, 1971, during its first season. “Mr. Big Stuff” became one of Stax Records’ more popular and recognizable hits. It was featured in the 2007 mini-series The Bronx Is Burning. It was nominated for Best Female R&B Vocal Performance at the 1972 Grammy Awards.

This is not her only time on the charts although it is her most notable. In 1985, she gained more recognition when she covered Rockin’ Sidney’s zydeco novelty hit, “My Toot Toot,” and found herself in a cover battle with Denise LaSalle. While LaSalle’s version reached the top ten in the United Kingdom, Knight’s version was the more successful stateside, reaching #50 on the pop chart. Knight was then given a chance to perform it on the TV variety show Solid Gold. The song also became her only hit in South Africa, reaching number 3.

This famous tune was written by Andy Fraser and Paul Rodgers. Paul Rodgers went on to front the supergroup Bad Company and even fronted Queen after Freddie Mercury’s death. John Mellencamp even called Rodgers “the best rock singer ever.” But there wasn’t always rockstar praise and fanfare for the band. In fact, according to the Bassist and songwriter, “All Right Now” was written after the band played a terrible gig.

They said, “This terrible gig we did at a college in Durham. We’d driven up there on a rainy Tuesday, it was cold and miserable and we got there in a pretty foul mood, to be honest. And then we saw the audience… it was a venue that could hold 2,000 people, but there were only about 30 people there. And those 30 were all off their heads on Mandrax… it was pretty grim. But of course, we went on anyway. Now usually, we could get up there on stage and it didn’t matter who was watching or whether they were getting into it… we’d just play for ourselves, basically, and have a good time. But this night, it just wasn’t happening… we absolutely sucked. Afterward, in the dressing room, there was just this horrible silence… a really bad atmosphere. So to try and alleviate the tension, I just started singing… y’know, ‘All right now, baby it’s all right now,” over and over, kind of like a parent trying to get their kids along! But it worked, the rest of the band started tapping along and so I thought, ‘We’re onto something here.'” They definitely were because the song went to number one in the UK and number four in the U.S. To this day, pretty much everybody has heard this song.

“The Hustle” By Van McCoy is the only instrumental song on our countdown but that doesn’t make it any less “wonderous.” In case you haven’t noticed yet, DISCO was a pretty big deal in the ’70s.  This song was actually conceived in New York City. One night Van McCoy was at a club named Adam’s Apple and he watched patrons doing a dance called “The Hustle.” That week he and his band recorded the song “The Hustle” and the rest is history. It went all the way up to No. 1 and was even sampled by the late pop sensation Selena, years later. McCoy has about 700 song copyrights to his credit. He has produced songs for many famous artists including Gladys Knight, The Stylistics, and Aretha Franklin.

This song has actually been recorded and released by a number of famous and successful artists including The Everly Brothers, Roy Orbison, Emmylou Harris, and even the iconic Cher. There are actually so many versions of this song. In 2006 Rod Stewart covered this song on an album that went to No. 1. There’s even a bluegrass version prominently featured in the hit Marvel movie Deadpool 2. Although Nazareth didn’t write this song, they did record the most successful version of it in the U.S. Their version reached the top 10 in the U.S quite impressive considering the competition.

Rap started in The Bronx in the early 1970s. Rappers and MC’s would rhyme over DJ’s looping certain parts of funk, disco, and R&B records. Rappers and DJs would battle to see who could rock the party better. The track was produced by Sylvia Robinson, who uses the bass line from the song “Good Times” by Chic and features the vocals of “Wonder Mike” “Big Bank Hank” and “Master Gee.”
Widely recognized as the first rap song, Rappers Delight introduced hip hop to the world charting in the top 40 in the US and reaching the top 3 in the UK and Canada. Nobody had ever heard anything like this before, but still, many thought rap was a novelty that would come and go. As we all know today, rap did NOT come and go and went on to become one of the most popular genres in America. For this reason, It is widely regarded as one of the most important tracks ever made and was entered into the Library of Congress in 2011 but The Sugarhill Gang never repeated the success.

This song received many awards including the Grammy for Song of the Year and is the only song on our list to have won an Oscar for Best Original Song. This song was truly record-breaking as it held the #1 position on the Billboard Hot 100 chart for ten consecutive weeks straight, which at the time, was a new record. Although it was originally written as a love song for a movie of the same title, Boone, a devout Christian, interpreted the song as more inspirational and claimed that it was actually about God lighting up her life. Although in 1980 Boone returned with a number on the country hit – “Are You on the Road to Lovin’ Me Again,” she would never repeat the record-breaking success she enjoyed for “You Light Up My Life.” Like other songs on our list, this song was covered by many famous artists including Johnny Mathis, Whitney Houston, and Kenny Rogers. It’s probably worth noting she is the daughter of Pat Boone, who According to Billboard, was the second-biggest charting artist of the late 1950s, only beaten by the king of rock and roll himself, Elvis Presley.

Released in 1970, “O Ooh Child” was a B-Side to a Beatles cover, “Dear Prudence” but the B-Side ended up overshadowing the A-Side going all the way up to #8 on the Billboard Hot 100. Another song on our list that was prominently featured in Marvel’s Guardians of the Galaxy series and yet another song on our list that inspired cover versions. From huge Artists like Nina Simone, Dusty Springfield, Hall and Oates, and Janet Jackson. Tre from Phish even covered it on The Tonight Show with Jimmy Fallon – Long live the 70’s.

“My Sharona” could be the number one-hit wonder of all time. Good luck finding anyone who hasn’t heard this classic of rock and roll. GET THE KNACK was actually the fastest-selling debut album for a group since MEET THE BEATLES. And of course the #1 selling single of 1979. The song has a pretty literal meaning, The lead singer Doug Fieger actually knew a girl named Sharona Alperin and used the song to win her over, needless to say, it worked!

At one point they were even engaged but they were never married. Fieger’s rock and roll lifestyle became too much to handle and they called it off. Not sure if muses get royalties for the songs they inspire but Sharona is doing just fine and is now a successful realtor in Los Angeles. When Fieger passed away Sharona wrote “From the time Doug and I first met, both of our lives changed forever. It’s very rare for two people to have such an impact on each other. The bond we shared is something that I will treasure as long as I live, he will always have a special place in my heart.”