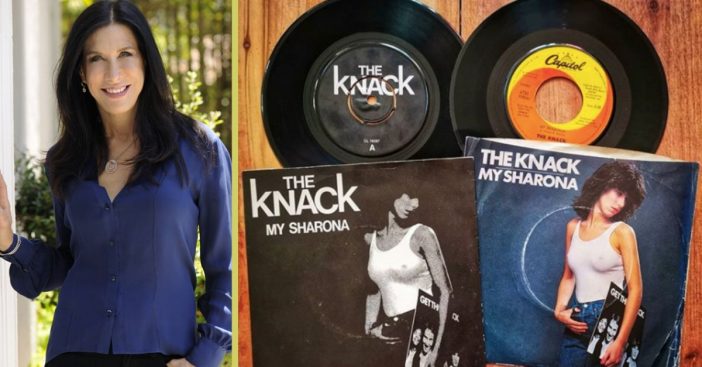 The 1979 hit “My Sharona” by The Knack is a song that reached number one on the Billboard Hot 100 singles chart. It also reached number one on Billboard‘s 1979 Top Pop Singles year-end chart. But, do you know who really inspired the ’70s classic? A woman named Sharona Alperin. Now a top real-estate agent LA, she was first a rock-star-muse in the summer of 1979 when she met Doug Fieger, lead singer of The Knack.

At the time, she was still a student at Fairfax High School. “Doug was nine years older than me. I was 17. And he was instantly saying things like, ‘I’m in love with you. We’re going to be together,’” Sharona says. “I was fully in love with my serious boyfriend at the time and he was much closer to my own age.”

Meet Sharona Alperin, or “My Sharona”

Of course, that didn’t stop Fieger. He was able to woo her by getting one of her favorite performers, Eddie Money, to come up on stage and sing “Two Tickets to Paradise” with the Knack. However, the one thing that truly knocked her off her feet was when he sang a song with her name in it. “When they all sang ‘My Sharona’ I was stunned,” she says. “I actually remember asking myself, ‘Did I just hear a song with my name in it? What just happened?’

RELATED: The Knack Releases Their Own “My Sharona” Coronavirus Parody Video

“And when the song came out on the radio,” she remembers. “I was still in a relationship with my boyfriend, if you can believe it.”

She can’t resist any longer!

Just a few months later, Sharona could no longer resist the lead singer and she broke up with her boyfriend. At the age of 19, she began touring with The Knack. “I have a 19-year-old daughter in college now, and here I am wishing my daughter was in college across the street rather than at USC,” she laughs. “And at the same age I’m off traveling with a rock band all over the world.”

When the band wasn’t touring, Sharona would be house-hunting in the meantime. “Doug would be in the studio and I would preview houses for him. He would tell the real estate agent with the listing, ‘Do you mind if Sharona shows it to me, and the real estate agents would be like, ‘Wow, you really know how to show a house.’” The two were together for four years but broke up after that. However, they remained good friends.

At age 25, Sharona was able to secure a real estate license. Her area of expertise became homes above the Sunset Strip. She is now an extremely successful mover of multimillion-dollar estates at Sotheby’s International. Aside from her real estate career, she calls herself a ‘foodie’ as she loves to dine out at restaurants. She also loves to enjoy her cocktails. It’s clear that the rockstar lifestyle is behind her, but she sure has fond memories of it.

Click for next Article
Previous article: This 1946 Disney Song Is The Epitome Of ‘Feel Good’ Music Back In The Day
Next Post: ‘Ferris Bueller’s Day Off’ Cast Reunites And Shares Rare Throwback Photos