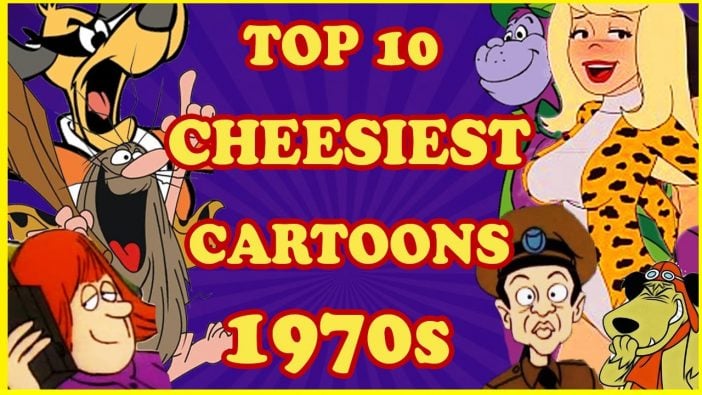 Every kid has a Saturday morning routine. Jumping out of bed, grabbing your favorite cereal, then rushing to the TV so you don’t miss a second of the best part of the week – Saturday morning cartoons! Cartoons transport you from your mundane everyday existence to a world where anything can happen and all your dreams can come true. Everyone has a favorite childhood cartoon that they’ll remember forever, and some animated shows become so iconic that even if you never watched them on TV you still recognize their characters.

Think The Flintstones or The Simpsons. Unfortunately, the vast majority of cartoons don’t reach this legendary status and slowly fade out of popular consciousness. This doesn’t make them bad, however, and certainly doesn’t make them any less special to the kids who eagerly awaited them on Saturday mornings. Today we’re going to remember some of the weirdest and wackiest cartoons from the decade with perhaps the greatest treasure trove of forgotten gems, the 1970s!

1. ‘Captain Caveman and the Teen Angels’

How could you possibly improve upon the wildly popular late ’70s drama Charlie’s Angels? Yep, that’s right. Add into the mix a 2 million-year-old caveman who flew around on his club, stored useful gadgets in his massive body-hair, and was voiced by Bugs Bunny himself, the legendary Mel Blanc. Captain Caveman and the Teen Angels focused on three fetching teenage crime fighters who discovered their eponymous sidekick frozen in a cave. After being thawed out, Captain Caveman devoted his unique talents to help the young ladies defeat evildoers. Unique in that he was often more of a hindrance than an asset. The caveman often had to be stopped from eating vital clues whole, and his flying club failed repeatedly, oftentimes in midair! However, Captain Caveman proved to be a perfect foil for the teen angels, and his zany antics had kids laughing every Saturday Morning.

Sometimes it feels that a cartoon was not just created for children, but also created BY children. The Great Grape Ape Show from the late ’70s definitely feels like something made up by a kid. The show starred a 40-foot tall purple gorilla named Grape Ape who possessed the intellect of a child and roamed the countryside with his sidekick Beegle Beagle, generally terrifying everybody they met. Most of the humor revolved around Grape Ape’s massive size and low intelligence, which combined to create destruction. When he sneezed, there would be hurricane-force winds, and when he cried, floods would destroy the area. Grape Ape was very apologetic though, always offering his famous, “I’m sorry!” after fouling something up. The iconic image of Grape Ape riding on top of a yellow van driven by Beegle was eagerly awaited on Saturday mornings and remains hilarious to this day.

What’s one of the most important things for a private detective to be able to do? Sneak around. And what’s one of the best ways to sneak around? Drink a magic potion that shrinks you down to one inch tall of course! The cartoon Inch High, Private Eye followed the adventures of a detective who does just that. Modeled after Maxwell Smart from the hit TV show Get Smart, Inch High would use his diminutive stature to solve crimes that would have foiled a taller man. He was accompanied by his niece, her massive boyfriend, and his loyal dog in the Hushmobile, a car so quiet it was impossible for criminals to hear them coming. Able to sneak in almost anywhere and hide in almost anything, like a fortune cookie — Inch High was the perfect private eye, and always managed to bring criminals to justice in short order!

A hip, crime-fighting rock band that lives in an underwater civilization in the year 2076? Yes, please! Oh, and did I mention that the band’s drummer was a 15-foot airbreathing great white shark named Jabberjaw with the Rodney Dangerfield inspired catchphrase of, “I don’t get no respect?” Even Better. Jabberjaw was a cartoon that merged the classic framework of teenagers solving mysteries with the shark craze that swept the nation after the movie Jaws came out in 1975. The eponymous shark and four human members of the band “The Neptunes” would fight crime and foil villains, usually by having Jabberjaw transform himself into a random inanimate object such as a trampoline, parachute, etc. The show would then invariably climax with a chase scene of the group running from the bad guys while one of the Neptunes’ own songs played in the background. It all added up to a formula that was perfect Saturday morning fare!

5. ‘Wait Till Your Father Gets Home’

The show Wait Until Your Father Gets Home is unique on this list in that it was a cartoon aimed at adults that addressed current tensions in society. Modeled after All in the Family, the show focused on the relationship between a straight-laced conservative father and his left-leaning, counterculture embracing oldest son and daughter. Mom kept the peace, while the paranoid far-right neighbor prepped for a communist invasion added a sprinkling of zaniness. At first glance, animation might not seem like the best vehicle for examining the widening generational gap in America in the early ’70s, but the show was able to take a medium dominated by children’s shows and make it feel all grown up. As the only primetime animated show to survive for longer than one season in between The Flintstones in the early ’60s and The Simpsons in the late ’80s, they must have been doing something right!

The idea of a bumbling hero accidentally succeeding despite their own best efforts is a storied tradition, appearing in everything from TV and film to literature. But the idiot hero archetype might have reached its apex with the cartoon Hong Kong Phooey. Capitalizing on a 1970’s kung fu craze in America, the show tells the tale of dog Penny Pooch, who worked as a janitor in a local police station. When hearing of a crime he would quickly use a filing cabinet to change into his crime-fighting alter ego, Hong Kong Phooey. Despite possessing The Hong Kong Kung Fu Book of Tricks, Phooey was terrible at fighting crime. The only way the bumbling canine ever succeeded was when his own incompetence had hilarious side effects that solved the crime, or if his much more capable pet cat Spot stepped in to rescue him. In the end, he always managed to save the day, however, karate-chopping his way into our hearts.

An important lesson is teaching kids that there are better ways to solve conflicts than by using violence. And what better way than basketball?! Harlem Globetrotters was the first Saturday morning cartoon that featured a predominantly African-American cast and revolved around the adventures of the famous trickshot basketball team. Driven to their away games by their manager, Granny, the squad would without fail become embroiled in some local conflict. The Globetrotters always proposed a basketball game as a peaceful solution, which they obviously expected to win handily. But usually, their nefarious opponents would rig the game, so that by half time the Globetrotters would be getting their butts kicked. However, they would always come storming back in the second half to eke out a close victory and save the day. A milestone for racial diversity, Harlem Globetrotters was certainly a slam dunk every Saturday morning.

Replace “girls” with “bears” in Cyndi Lauper’s hit song “Girls Just Want To Have Fun,” and you’ll roughly have the premise of the early ’70s cartoon Help!… It’s the Hair Bear Bunch. Every episode began with the bears breaking out of their cages using their “invisible motorcycles.” Once free, they either embarked on get rich quick schemes or played hilarious pranks on dimwitted zookeeper Mr. Peevly. After wrapping up the day’s shenanigans, the bears were always able to sneak back into their cages, leaving Mr. Peevly none the wiser. All three bears dressed in counter-culture clothing and were portrayed as hippies who just wanted to have a good time living their best lives. And seeing as they always got the better of the zookeeper, they certainly were!

The Partridge Family is an early 1970s sitcom about a family band struggling to make it in the music industry. Now take that premise, animate it, and have it take place more than 200 years in the future, and voila, you have Partridge Family 2200 A.D. If that sounds bizarre, that’s because it 100% is. There is never any explanation as to why the family is living so far in the future, and the show borrowed heavily from The Jetsons – with flying cars, houses in the sky, and even the family dog being almost direct copies. The suddenly “galaxy famous” singing group is also quite a bit more successful than in their live-action show – which seems appropriate given how they’ve had two centuries to perfect their act! An odd mash-up of two more prominent shows, Partridge Family 2200 A.D. was nevertheless an entertaining musical adventure every Saturday.

If it ain’t broke, don’t fix it. Hanna Barbera must have had this adage in mind when they created the early ’70s cartoon The Funky Phantom because the show is basically Scooby-Doo with one major change – they replaced the title character with a 200-year-old ghost! The Funky Phantom follows a group of teens who travel the country in their “Looney Duney” dune buggy solving mysteries. While taking shelter from a rainstorm in a creepy old mansion, the gang inadvertently awakened the ghost of Jonathan Wellington “Mudsy” Muddlemore, a revolutionary war soldier who was hiding from the red-coats in a Grandfather clock when he became trapped and died. Mudsy decided to accompany the group on their adventures, using his power of invisibility to help solve crimes. The Funky Phantom, while being a bit derivative, was definitely still a hair-raising good time.

Wowsers. What a collection of zany, off the wall, and sometimes downright weird cartoons. How many of these forgotten toons did you remember? And what’s your favorite forgotten ’70s cartoon?

RELATED: Things All People Who Grew Up In The ’70s Will Remember Vividly

Click for next Article
Previous article: Feel Like A Kid Again With These 10 Carefree, Nostalgic Activities
Next Post: “A Cougar I Am Not”: Why Betty White Will Only Date Older Men